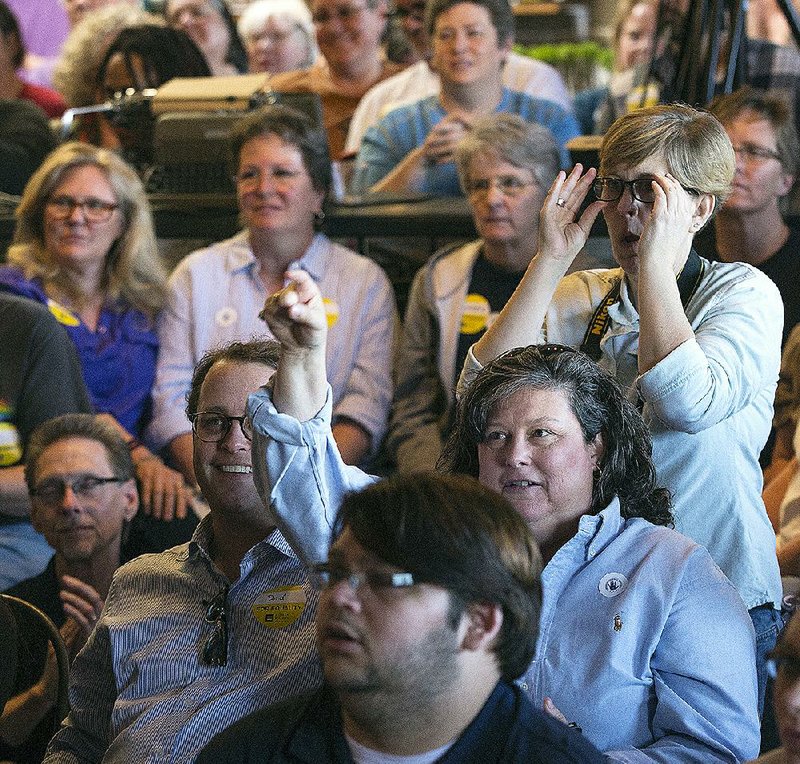 About 700 people gathered in Little Rock on Sunday opposing an Arkansas bill they say would allow businesses to refuse service to gays and transgender people.

They want lawmakers to stop moving forward with Arkansas House Bill 1228, dubbed the Religious Freedom Restoration Act, which passed through the Arkansas Senate on Friday. The amended version will now go to the House. Gov. Asa Hutchinson said in a written statement Friday that he "will sign this bill as amended."

The legislation, by Rep. Bob Ballinger, R-Hindsville, would not allow the state to "substantially burden" a person's right to follow his religious beliefs unless the government possesses a "compelling" interest in the regulation and if the regulation is the least restrictive option. In the legislation, the definition of "person" includes associations, partnerships, corporations, religious institutions or other legal entities.

"It's not over yet. There are still actions left to be taken," McDaniel told a crowd that overflowed from South on Main restaurant. "I respect our governor and I believe he will listen to good people with good counsel. If you want to be heard, use a respectful voice, come together intelligently and let our governor and legislators know why this is so wrong and so bad and that this is not who we are."

Hutchinson could not be reached Sunday through his spokesman.

But his office Sunday night re-issued his Friday statement in which the governor said, in part, "This bill is designed to protect the religious freedoms of all Arkansans ... Arkansas is open for business, and we recognize and respect the diversity of our culture and economy."

Ballinger said Sunday night that a U.S. Supreme Court decision in 1997 "made it easier for states to burden religion" and that the bill's purpose was to restore protection.

"What happened is that there's a group that's assembled to attack. They're not against what the bill does but what they say the bill does," Ballinger said. "It's not as radical as people think it is. They're protesting and angry about something and they've placed this law as the symbol, and it's become the symbol for what it's really not."

Since the U.S. Supreme Court decided in 1997 that a federal Religious Freedom Restoration Act did not apply to the states, 20 states have enacted their own version of the law.

This year, 13 states have either adopted or are trying to pass such a law, according to the National Conference of State Legislatures.

Hundreds of people protested the action during a rally Saturday outside the Indiana Statehouse, and large corporations -- including Angie's List, Wal-Mart and Apple -- have spoken out against the law.

Pence said Sunday on ABC's This Week that enacting the law was not a mistake.

The Indiana governor did not answer directly when asked multiple times whether the law would allow businesses to refuse to serve gay customers, The Associated Press reported.

McDaniel, speaking to the crowd at South on Main, noted Pence's refusal to answer that question directly.

"That tells you all you need to know about what this bill does," McDaniel said.

McDaniel wrote a guest column in the Arkansas Democrat-Gazette earlier this month that stated the legislation "would allow individuals and businesses across this state to refuse service to lesbian, gay, bisexual and transgender Arkansans, to women, to religious minorities -- and to any other Arkansan who may face regular discrimination."

The crowd inside South on Main -- and the hundreds more listening from two overflow rooms -- jeered Sunday when Barbara Mariani, a Pulaski County deputy prosecuting attorney, gave examples of how she said the law could be put into effect.

She said members of the lesbian, gay, bisexual and transgender community could be refused driver's licenses, affordable housing, employment, financial aid and admission to state colleges.

"A UAMS doctor can refuse life-saving care and have a defense under HB1228," Mariani said. "It can go on and on. Basically, there's no limitations."

At the end of the meeting, Human Rights Campaign member James Rector asked attendees to gather at the Capitol today and to join in later in the day for an "equality prayer" at the governor's mansion.

Holly Dixon, legal director of the state chapter of the American Civil Liberties Union, said she thought Arkansas' legislation was intended to act as a "safety net" in case Senate Bill 202, which became Act 137 last month, was declared unconstitutional.

"They're running scared because they see equality coming, and that's what this is all about," Dixon said.