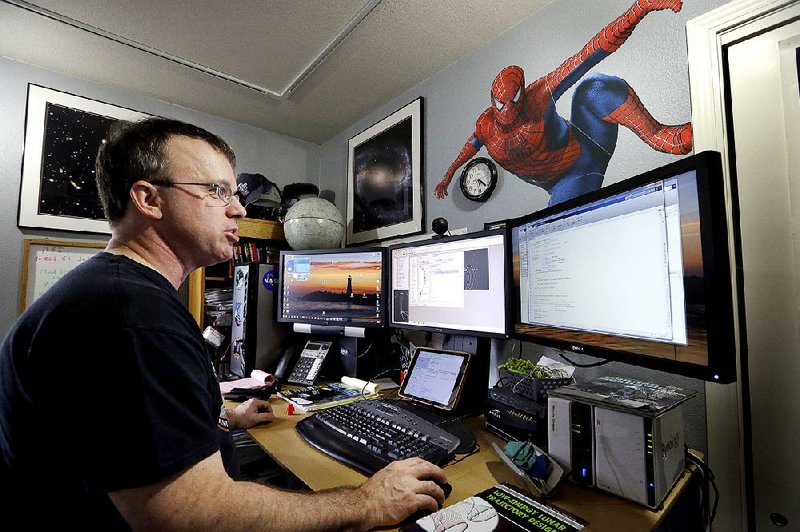 Mike Loucks sits in his home space exploration engineering office Thursday, March 26, 2015, in Friday Harbor, Wash., in the San Juan Islands. Loucks lost Internet and phone service during a 10-day outage on the island in 2013. Other regions around the country also have fallen dark in recent years, sometimes for days at a time, because of failures or accidents affecting the nation’s broadband infrastructure. The failures have revealed vulnerabilities in the backbone of the nation’s high-speed Internet highway, which often lacks the detour routes necessary to quickly restore service when outages occur outside of major cities. (AP Photo/Elaine Thompson)

FLAGSTAFF, Ariz. -- When vandals sliced a fiber-optic cable in the Arizona desert in February, they did more than time-warp thousands of people back to an era before computers, credit cards or even phones. They exposed a glaring vulnerability in the nation's Internet infrastructure: no backup systems in many places.

Because Internet service is largely unregulated by the federal government and the states, decisions about network reliability are left to the service providers. Industry analysts say these companies generally do not build alternative routes, or redundancies, unless they believe it is worthwhile financially.

The result: While most major metropolitan areas in the United States have backup systems, some smaller cities and many rural areas do not.

"The more rural the location, the more likely that there's only one road in and out of that location," said Sean Donelan, a former infrastructure security manager in the U.S. Homeland Security Department who now works for a cybersecurity firm. "If someone manages to cut that fiber, you'll generally see a one- or two- or three-day outage."

Despite its own warnings about such vulnerabilities two decades ago, the federal government has taken no steps to require Internet companies to have backup systems, even as it has provided billions of dollars in subsidies to expand broadband Internet into unserved areas.

In northern Arizona in February, tens of thousands of residents were without Internet service -- some for up to 15 hours -- after vandals cut through an underground bundle of fiber-optic cables owned by CenturyLink. ATMs went down, stores couldn't process credit cards, college students in Flagstaff had to put their research on hold, and even 911 emergency service was lost.

Earlier this month, several thousand people lost Internet and phone service for half a day when an electric company crew accidentally cut a fiber-optic line in northern New Mexico.

When an underwater fiber-optic cable got wrapped around a big rock and broke in 2013, some residents of Washington state's San Juan Islands were without Internet and telephone service for 10 days.

Among them was aerospace consultant Mike Loucks, who said he was shocked to find out his home phone, cellphone and Internet service did not work independently of each other. All went down because they relied on the same cable. He ended up taking a ferry to the mainland to dial in to conference calls from his car outside a McDonald's.

"When I figured out what all had been routed to this cable, it's a single-point failure thing," he said. "That's pretty dumb. Why don't you guys have a backup cable?"

He was so frustrated that he switched Internet providers.

CenturyLink, the broadband provider in the Arizona and Washington disruptions, declined to make officials available for an interview about its Internet infrastructure. But spokesman Linda Johnson said in an email that the company acts quickly to restore service and "is constantly investing in its local network and strives to deliver new services and build redundancy where possible."

After the San Juan Islands failure, CenturyLink spent $500,000 to install a microwave system that now backs up the underwater cable. A microwave system is wireless technology that relies on a series of above-ground antennas or towers to transmit data. It's more often used in rural areas.

Companies have been deploying more than 10 million miles of fiber annually in the United States, increasing the risk of damage from backhoes, trench-diggers and shovels, according to an analysis by a network reliability committee of the Alliance for Telecommunications Industry Solutions. The number of failures on high-capacity fiber-optic lines in the United States more than doubled from 221 in 2010 to 487 last year, according to the Federal Communications Commission.

Fiber-optic cables form the spine of the Internet. A fiber bundle contains dozens of tiny glass fibers -- each about the width of a human hair -- that use light waves to transmit data. The fibers often are buried along existing rights of way for highways, railroads or pipelines. It is common for a telecommunications company to install the cables and then lease space on them to others.

That saves money for everyone involved. But it also means lost service can affect a wide variety of services.

As early as 1995, the U.S. Commerce Department's National Institute of Standards and Technology warned that the "power of optical fiber technology is diminishing the number of geographic transmission routes," concentrating the flow of information and "resulting in an increase in network vulnerability."

Since 2009, the U.S. Agriculture and Commerce departments have provided about $10 billion in grants and loans to expand broadband Internet access. The departments said recipients were encouraged but not required to build redundancies into their projects.

The FCC says about half the rural United States lacks access to high-speed Internet service. In Arkansas 59 percent of the state's 2.99 million people don't have access to high-speed Internet service, according to data provided by The Associated Press. That places the state third, behind Montana (87 percent) and Vermont (80 percent) in percentage of population without broadband access.

Among Arkansas' rural population, about 1.28 million people, 84 percent, have no access to high-speed Internet service, the data show, ranking the state fourth among states whose rural populations lack broadband access.

The FCC plans to distribute about $20 billion over the next five years to support rural broadband but that doesn't require recipients to build network backup systems to protect against failures.

The funding "is designed to expand broadband to as many rural Americans as possible while not increasing the cost of the program" to customers, FCC spokesman Mark Wigfield said.

The FCC recently increased its oversight of Internet providers by classifying them as "telecommunications services" that must operate in the public interest. But that doesn't carry any new mandate for Internet network redundancies, because such backups aren't required of phone companies, he said.

Some states have laws specifically barring the regulation of Internet service, and it's outside the jurisdiction of many state utility regulatory agencies.

Washington state Rep. Jeff Morris, who represents the San Juan Islands and is chairman of the House Technology and Economic Development Committee, said lawmakers are hesitant to require redundant lines for fear they will lead to higher Internet and phone bills for their constituents. His colleagues have discussed taxing access to Internet services, but that is prohibited by federal law.

"It really spoils our ability to generate revenue to give better service and reliability to our constituents," he said.

"Dependability is premier to the Internet these days," said Sandy Jones, a member of New Mexico's Public Regulation Commission. "Redundancy -- two paths out, three paths out -- is really critical for businesses. Just think of restaurants, gas stations, all the things that shut down when there's no Internet line."

Information for this article was contributed by Sonny Albarado of the Arkansas Democrat-Gazette.