Break over, spring resumes for Hogs 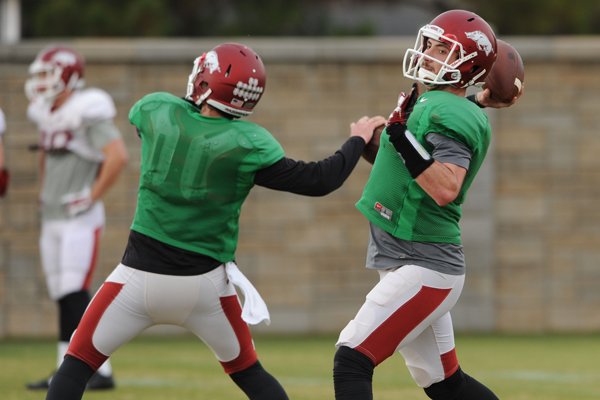 FAYETTEVILLE -- Arkansas football Coach Bret Bielema was stoked about the first week of spring drills, and now he and his staff will find out how much the Razorbacks retained during their spring break layoff last week.

Arkansas will conduct its fourth of 15 spring practices this afternoon on what projects as a near-ideal spring day with temperatures in the low 70s and a 25 percent chance for rain. Bielema has opened practice to members of the media for the first time this spring.

"Really ... I was just kind of blown away with the carryover from the fall for guys that we had come back with us," Bielema said to describe the first week of spring work.

Defensive coordinator Robb Smith, who helped guide the Razorbacks to 10th nationally in total yards allowed last season, has to replace a handful of key contributors, but he said he liked what he saw to start spring drills.

"The guys have kind of heard things before and we've been able to pick up where we left of and there's been a lot of enthusiasm, a lot of energy," Smith said.

"They're in a good place right now," Enos said after the first week of spring. "There's a lot of good attitudes. There are young guys trying to make a statement. There are veteran players trying to get better.

"I've been around a lot of guys who are very eager to learn."

Senior quarterback Brandon Allen, preparing for what would be his third year as the Razorbacks' starting quarterback, continues to lead the group that includes his brother, sophomore Austin Allen, redshirt freshman Rafe Peavey and true freshman Ty Storey.

The tailback situation will warrant scrutiny this week as the Razorbacks continue to check out the talent available behind 1,000-yard rushers Jonathan Williams and Alex Collins.

Williams will likely be held out of full-contact work for most, if not all, of spring, and Collins' appendectomy could make contact work sparse. Sophomore Denzel Evans and redshirt freshman Juan Day are in competition with senior combo back Kody Walker for reps at tailback, though Day is expected to miss time after suffering an injury on the first day in pads on March 19.

Bielema has suggested he might allow public viewing of a workout or two, as he did last spring, prior to the open-access Red-White game at 1 p.m. on April 25 at Reynolds Razorback Stadium.