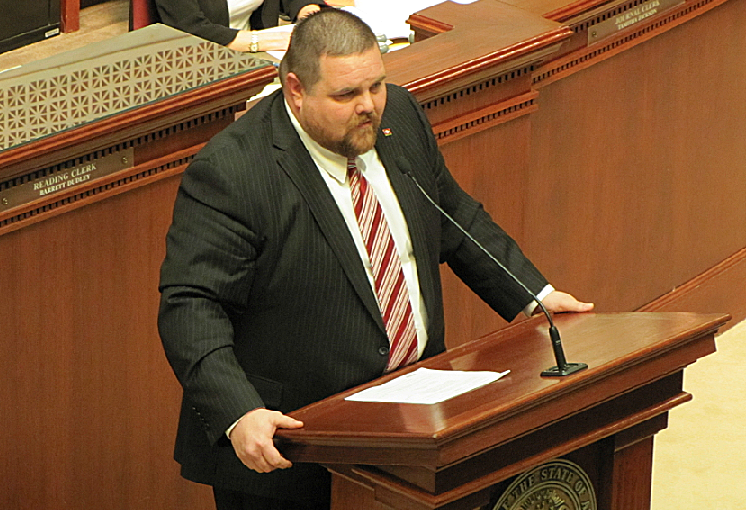 Rep. Bob Ballinger speaks on the House floor while presenting Senate amendments to his bill, House Bill 1228, on Tuesday afternoon.

Arkansas's Religion Freedom Restoration Act was approved by the state's House of Representatives on Tuesday in a final vote before it heads to Gov. Asa Hutchinson's desk.

Hutchinson has said repeatedly he will sign the measure into law despite opponents who have called it discriminatory and a backlash against similar legislation in Indiana that has that state's governor seeking to further clarify the law's scope.

The Arkansas House passed amendments in three separate votes: 68-19, 67-18 and 67-21, to HB1228 on Tuesday. The chamber previously approved the bill, sponsored by Rep. Bob Ballinger, R-Hindsville, but had to approve a new version with amendments added in the state Senate.

Rep. Camille Bennett, D-Lonoke, led a failed attempt to refer the bill back to committee, saying the Senate "hijacked" the bill by adding 68 lines to it.

"The bill as is is an effective bill, is a good bill, is effective to pass," Ballinger said. "If you're going to refer it back to committee, it's to kill the bill."

That motion failed with 26 voting for and 62 voting against it.

"Several members of our caucus and across party lines have vehemently tried to talk to Ballinger...and work with the governor's office to amend this bill, not to kill it but to make it plausible law," Armstrong said.

Several representatives, including Rep. Nate Bell, R-Mena, called for points of order during Armstrong's speech because they said he wasn't speaking just about the amendment.

Armstrong sat down after Rep. Justin Harris, R-West Fork, called for a point of order and said that Armstrong was "attacking" other representatives.

Supporters of the law say it provides needed religious protections. Opponents, including many who gathered at the state Capitol for a second day in a row to protest HB1228, counter that the bill enables discrimination against gay people.

The leaders of Apple, Yelp and Little Rock-based Acxiom have called on Hutchinson to veto the bill, and Wal-Mart has also expressed reservations about it. On Tuesday, Little Rock Mayor Mark Stodola sent a letter to Hutchinson asking him to veto it and a former Republican Speaker of the House of Representatives, Davy Carter, on Monday called on House members to vote against the bill.

Wal-Mart's CEO Doug McMillion released a statement via a company social media account saying that HB1228 "threatens to undermine the spirit of inclusion present throughout the state of Arkansas and does not reflect the values we proudly uphold."

Ballinger has said HB1228 will shift Arkansas to a strict scrutiny standard, which makes it more difficult to infringe on a person’s religious rights. The bill also defines a person as associations, partnerships, corporations, religious institutions or other legal entities. Ballinger told House members when the legislation initially passed that chamber last month that it would require the government to have compelling interest and for it to take the least restrictive action to regulate a "legitimate, deeply-held religious belief."