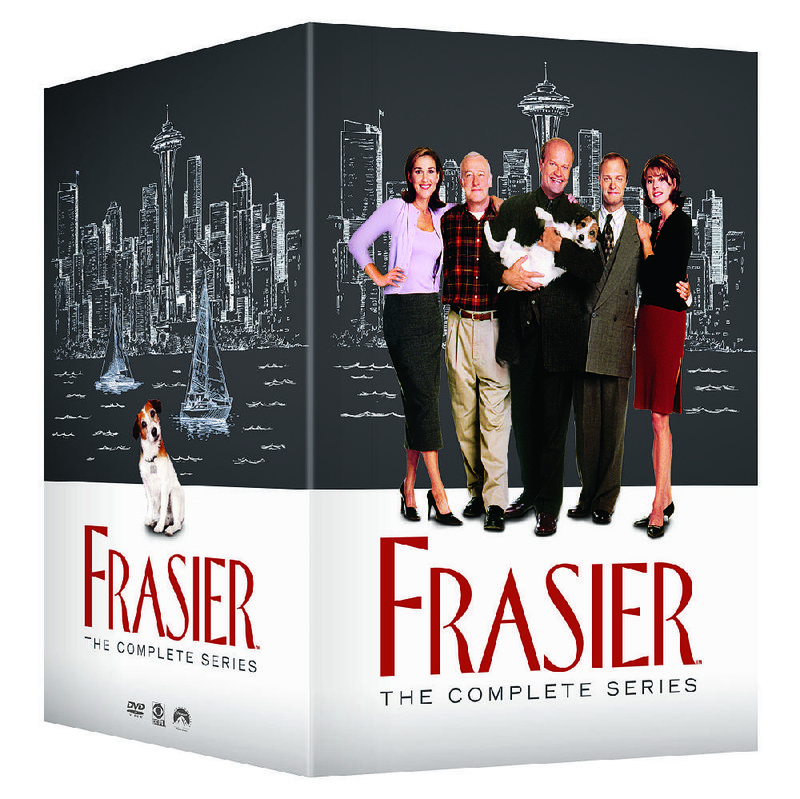 What is it? Frasier, Complete Series, 264 episodes on 44 discs from CBS and Paramount

Who is Frasier? Dr. Frasier Crane (Kelsey Grammer), psychiatrist, started out as one of the regulars over on that beloved classic Cheers. When it ended after 11 years, the good doctor got a new show, a spinoff that lasted another 11 years, accumulated a record number of Emmy Awards and nominations and itself became a TV classic.

As this new series begins, Frasier has left his life in Boston and moved back to his hometown, Seattle, to be the host of a radio call-in psychiatric show. His psychiatrist brother Niles (David Hyde Pierce) is both horrified and glad for the opportunity to be smugly superior.

No sooner has Frasier moved in when he's immediately faced with a problem. His father, a retired police detective, is still suffering the effects of being shot on the job. He needs to move in with Frasier.

Frasier is a sherry-drinking, opera-loving intellectual and cultural snob. Martin Crane (John Mahoney), on the other hand, is a practical, blue-collar, beer-drinking type of guy who shakes his head over his pretentious sons. Plus, he brings along his ratty old recliner and his "weird" Jack Russell terrier, Eddie.

Niles is around to "help," but Niles is even more neurotic and fastidious than Frasier and his marriage to the never-seen Maris keeps him very busy. "High maintenance" wouldn't begin to explain Maris.

How does it hold up? Very well. It wasn't too rooted in the pop culture and trends of the day. Superbly written, with an expert cast and an ability to pull off highbrow humor and slapstick, it really is a gem that stands the test of time.

Not that all the episodes are diamonds. Like most long-running shows, it slumps a little in later years, but it's still better than most of the sitcoms you'll find out there.

The whole series has been released over the years, but this is part of the company's efforts to put out new, slimmer, cheaper packaging.

Extras? The bonus features are carried over from previous releases, so if you already own those, there's no need to double-dip (unless you just want them to take up less space on your shelf).

There's a 20-minute piece on the show's creation, a couple of bits with the set designer, 13 minutes with Pierce and Grammer talking (separately) about Season 3, then two chunks of interviews with the cast and creative team discussing their feelings as the show ended. Other than that, there are two episode commentaries, and several short clip packages about various characters and the celebrities who voiced the radio show callers in the first three seasons.