Crowd: Justice not served in 1993 killings 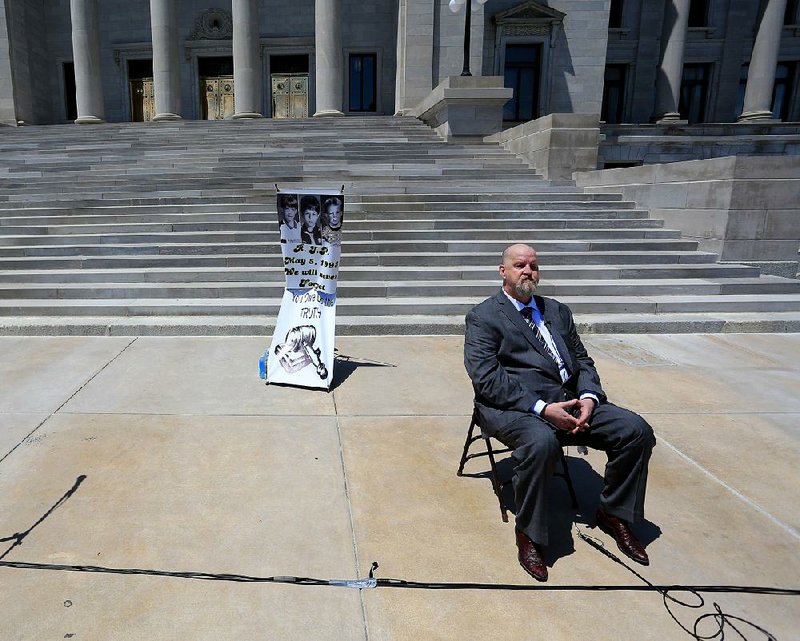 John Mark Byers, adoptive father of Christopher Byers, sits at the state Capitol on Tuesday during an event calling for justice in the slayings of 8-year-olds Christopher, Stevie Branch and Michael Moore (photos on poster, left) in West Memphis in 1993.

Supporters of the three men convicted of killing three boys in West Memphis in 1993 gathered Tuesday on the state Capitol steps and called for officials to reopen the investigation into the slayings.

On the 22nd anniversary of the deaths of Christopher Byers, Stevie Branch and Michael Moore, speakers -- including Christopher's adoptive father John Mark Byers -- said justice hadn't been served for the 8-year-old boys or for the three men who spent 18 years in prison for the killings.

Damien Echols, Jessie Misskelley and Jason Baldwin -- often referred to as the West Memphis Three -- were released from prison under a seldom-used plea agreement in 2011.

The plea agreement between the three men and prosecutors is known as an Alford plea. It allowed the men to maintain their innocence while admitting that there was enough evidence to convict them. The deal was struck after new forensic evidence was discovered and after years of case analysis by documentary filmmakers, authors and legal advocates that led many, including family members of the victims, to doubt that the men were responsible for the killings.

Byers initially believed that Echols, Misskelley and Baldwin killed the boys, but later changed his opinion and said Tuesday that he is convinced that they are innocent. He and Danny Owens, a legal assistant and investigator to Byers' attorney, Ken Swindle, questioned how 2nd Judicial Circuit Prosecuting Attorney Scott Ellington has handled the case and said he hasn't acted on new evidence that they provided that points to "the real killers."

They and other speakers at Tuesday's rally asked Gov. Asa Hutchinson and state Attorney General Leslie Rutledge, among other state officials, to step in.

"Now is the time to push for change," Byers told a crowd of about two dozen people. "To the great state of Arkansas: investigate the case. Follow up on the evidence we have given you. Quit hiding behind the meaningless Alford plea and prosecute -- and prosecute -- the men who killed these children."

Judd Deere, a spokesman for Rutledge, referred requests for comment to Ellington, who did not return phone calls Tuesday.

"We are not in a position to address any issue with regard to the West Memphis Three, the previous litigation or future litigation, because there's no pending procedure for us to consider. That would have to begin at the prosecutor level," Deere said.

Hutchinson spokesman J.R. Davis said the governor had no comment on the matter Tuesday.

The men Byers was referring to as suspects have never been charged in the case or been considered suspects by police.

Swindle filed affidavits in 2013 accusing Terry Hobbs, L.G. Hollingsworth, David Jacoby and Buddy Lucas of committing the killings, detailing reported confessions that two of them had made to acquaintances. Hobbs, Jacoby and Lucas have denied the allegations, and Hollingsworth died before the accusations surfaced.

Owens declined to elaborate Tuesday on other reported evidence that Swindle had taken to prosecutors, but said "any competent attorney" could get a conviction with it.

"We have given [Ellington] eyewitness statements of people that had been there, and we have given additional forensic evidence that could be used and could be considered. I never make it a point to discuss the specifics ... so that it can't be compromised. I'd rather see it tried in a court of law than, you know, in television," he said.

Over the years, the case has spawned four award-winning documentaries, a best-selling book and, most recently, a Hollywood film, driving public interest and turning Echols, Misskelley and Baldwin into international figures.

As an example, Tuesday's rally was attended by an Australian citizen who spoke about his interest in the case.

Byers, on several occasions, has publicly accused Hobbs in the killings, citing DNA evidence. He said Tuesday that he still believes that Hobbs, "without a doubt," was involved.

Efforts to contact Hobbs and his attorney were unsuccessful Tuesday. Hobbs has said repeatedly that he believes Echols, Misskelley and Baldwin killed the boys.

Echols, Misskelley and Baldwin did not attend Tuesday's rally.

Baldwin's mother Angela Gail Schneidmiller, known as Angela Gail Grinnell at the time of the killings, attended the rally but did not speak publicly.

"The one thing I would like to see is for justice to prevail, for the right people to be caught that murdered those children," she told the Democrat-Gazette.