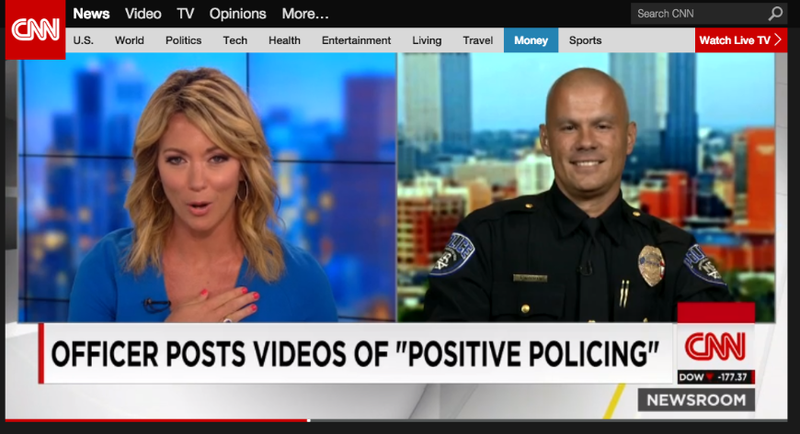 In one of his hundreds of Instagram posts, North Little Rock police officer Tommy Norman is seen — in uniform — jumping through a moon bounce alongside a group of enthusiastic children.

In others, he's playing a pickup game of basketball, surprising youths at the Boys and Girls Club or wearing face paint to match the tiger colorings of children at this year's Rose City Day festivities.

The common theme in the vast majority of Norman's more than 4,200 posts is him interacting positively with the community, particularly young people. It's an effort that has earned Norman some 8,200 followers on the popular photo and video-sharing network and — as of this week — some national exposure.

Norman on Wednesday appeared on CNN to discuss his and the North Little Rock agency's focus on community policing. His Instagram feed served as a backdrop showcasing firsthand some of the work.

"We know we can't win everybody over," Norman said Thursday. "We want the community to know that they can trust us. When you're involved in the community, you have to become embedded in that community. As a police officer, to me there's no other choice. You open your arms to love people and care for people and show compassion."

Norman said his followers swelled by more than 2,000 on Instagram after his CNN appearance, which came about after well-known Atlanta-based rapper and social activist Michael "Killer Mike" Render praised Norman's work in an interview with the network.

Render said in that piece that he believed Norman likely didn't even know he followed him on Instagram, but that the account shows him "out of his patrol car every single day" taking pictures, meeting with community members and giving children a positive impression of police officers. He said more lawmen should emulate Norman's ways.

In the segment, anchor Brooke Baldwin then spoke by satellite with Norman, who described his and the department's focus on community policing while clips from the Instagram account played.

Norman on Thursday called the national exposure a "big honor" for the entire police department and reflective of how well the community interaction works.

He noted his first Instagram post after the interview came as he was driving home from the studio and a school bus full of children recognized him, waved through the windows and called his name.

"I post that because I want to inspire other people," Norman said. "If you go out in the community, you can make such a huge difference. That's what it takes ... Maybe people before that didn't trust officers, now they will."

Norman said the benefits of his positive interactions and focus are clear.

On CNN, he recalled once being called to Little Rock because a murder suspect there wanted to turn himself in and had asked specifically for Norman, whom he recognized as someone he could surrender to "peacefully and with dignity."

Norman said he received a message after the CNN interview from a woman whose 4-year-old daughter "screams" when she sees officers because her father was fatally shot by one. The woman said she was looking forward to sharing the piece about Norman because it showed another side to law enforcement, he said.

And, Norman said, he's even heard from people who have reached out to him to let him know they've turned around their lives after earlier run-ins with law enforcement. He said he received a note from one man he'd arrested eight years earlier for dealing drugs who wanted Norman to know he was now making good money driving a truck.

"He said the way I treated him with respect meant a lot to him and he really remembers it," Norman said.

No other police officers in North Little Rock are as active on social media as Norman, though he stressed that the whole agency buys into the community policing philosophy. A number of officers are involved with the Boys & Girls Club and other local charities, and Chief Mike Davis has even instituted a policy where each month the department seeks to perform at least one specific "act of kindness" in the area.

Norman said the key is showing the community that police "truly care," a task he hopes his Instagram feed — as well as his posts on Facebook and Twitter — helps accomplish.

"Once that happens year after year, you're going to win the community over," he said.

Now this is cool! Today I was at a stop light when @lovelylanae25 & @jermaineboles2200 pull next to me & tell me that they just passed me when @ryanboles6 spotted me & yelled for his mom to make a u turn & catch up so he could see his buddy Officer Norman! #TheRealDeal #TeamPeace 👌💯🌎👮🏽