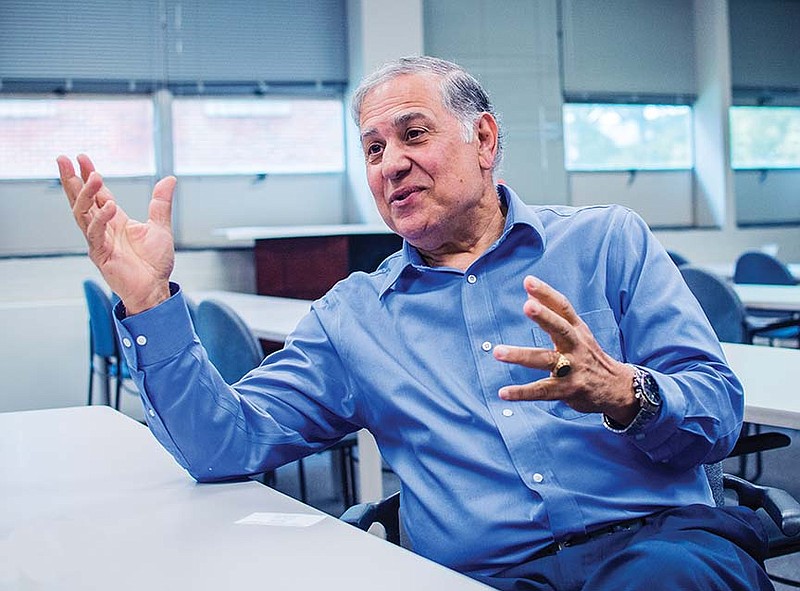 Raouf Halaby has retired after a 42-year teaching career at Ouachita Baptist University in Arkadelphia. Born in Jerusalem, Halaby came to OBU as a student in 1965. He retired as a professor of English and visual arts.

Raouf Halaby completed another leg of his journey on Saturday. He retired after 42 years of teaching at Ouachita Baptist University in Arkadelphia and is now officially a professor emeritus.

“It’s been a wonderful journey,” said Halaby, 69, who retired as a professor of visual arts and English.

“There is a time and a season, and this is my time and season [to retire],” said Halaby, who was born in Jerusalem and immigrated to the United States in 1965. “Besides, a surprise quintuple-bypass surgery in late December 2013 — from which I fully recovered — was a wake-up call.

“I wanted to go out gracefully and at the apex of my career,” he said. “Besides, every institution needs the injection of newer, younger blood, [but] I am having serious withdrawal symptoms, … leaving a profession and institution I dearly love.”

Scott Holsclaw, dean of the OBU School of Fine Arts, talked about his friend and colleague.

“Dr. Raouf Halaby and I have been colleagues for years. He is truly a Renaissance man and epitomizes the idea of the Christian liberal arts education,” Holsclaw said.

“His ability to connect the classics, whether philosophy, literature or art, gives him a unique insight into the human condition and makes him an outstanding teacher and scholar,” Holsclaw said. “With a dual appointment as professor of English and visual arts, Dr. Halaby has contributed greatly to both disciplines.

“In his time as chair of the department of visual arts, his tenacity and perseverance helped to put the department on a firm footing. Dr. Halaby has had a distinguished 42-year career at Ouachita, and I have been privileged to work alongside him for 30 of those years.”

Halaby’s journey to Ouachita began 50 years ago in June, when he received a letter from Carl Goodson, then a professor of religion at OBU, informing Halaby that he had been accepted for admission in the fall of 1965.

“My twin brother, Ramzy, (who died in 2005) was supposed to come to Ouachita the year before,” Halaby said. “But somehow the letter never reached him. He ended up going to Gardner Webb College in North Carolina and finally on to Texas, where he received a degree in engineering.

“I requested the scholarship to OBU that he had been awarded, and it was transferred to me. I came here a year later.”

Halaby graduated from Ouachita in 1968 with a Bachelor of Arts degree in English and in 1970 with a Master of Science in Education degree. He also received a Doctorate of Education in 1973 from East State Texas University.

“On April 14, 1973, I received a letter from OBU president Daniel Grant inviting me to join the OBU faculty as an assistant professor of English,” Halaby said.

He was promoted to associate professor of English in 1980, then to professor in 1988. In 1994, he was named chairman of the department of visual arts. Since 1998, he has taught visual arts and English.

Halaby was born Nov. 22, 1945, in Jerusalem, the son of the late Jamil and Katrina Halaby.

“I never knew my dad,” Raouf Halaby said, adding that his father died when Halaby was quite young. “We moved to Beirut, Lebanon, in 1959 when I was 14.

“We pretty much had to leave [Jerusalem]. As a Palestinian, it was difficult being a second-class citizen. Our mail was censored. My mother had to take us to school after Israel [was] established. We tried to go to a local school, but the principal refused, saying, ‘You are not Jewish.’”

Halaby said he attended two other schools in Jerusalem before entering a private school that went through junior high.

“I remember in Jerusalem during the first few months of 1948, everyone in our Palestinian neighborhood had fled except us,” he said. “Our family was Christian; we attended the Antiochian Orthodox Church. I served as an altar boy.

“It was often difficult to get to church. We had to walk through the Jewish neighborhood and would be stoned and taunted, ‘Gentile, Gentile.’”

After his mother and siblings moved to Beirut, Halaby graduated from the National Protestant Secondary School (high school), which was affiliated with the Anglican Church. It was during this time that the Halabys learned about Ouachita Baptist University and the opportunities it offered to international students.

“We met Dr. Goodson, who was on a visit to Lebanon,” Halaby said. “Opportunities were limited for Palestinians in Lebanon.

“My brother came first [to the U.S.], and then I came. We came without credentials. We had travel papers and a visa, but it was not until I was 31, when I

became a naturalized American citizen, that I owned papers.

“My older son was a citizen before I was. I haven’t missed voting in an election since [becoming a naturalized citizen]. The first election I voted in was a school board election.”

It was not long after Halaby arrived at Ouachita that he met his future wife, Rachel Lollar. They married in December 1970.

“Rachel was born in Arkadelphia but raised in St. Petersburg, Florida,” Halaby said. “OBU is a family university. Her father graduated from OBU, and he told her, ‘That’s where you are going.’ She wanted to go to Florida State University.”

When the two met, Rachel said to Raouf, “So you’re a long way from home, too.”

Rachel began her teaching career in 1973. She taught elementary grades in the Arkadelphia, Bismarck and Kirby school districts. She retired in 2013 as coordinator of the gifted-and-talented program in the lower grades of the Arkadelphia School District.

“She tells me retirement is very good,” Halaby said with a laugh.

The Halabys have two sons, Ramzy, 37, who is a lawyer in the Washington, D.C., area, and Ryan, 33, who lives in Arkadelphia.

“Ryan is our miracle child,” Halaby said. “He had a malignant brain tumor extracted when he was 3 years old.

“He has to be one of the happiest, most loving, kindest 33-year-olds you’ll find anywhere. I draw courage from him.

“He has bonded us as a family. We are lucky to have him.”

Ryan lives in his own apartment and works at Brookshire’s [Food & Pharmacy] as a grocery sacker. Halaby said Ryan was nominated as the Clark County Grocery Sacker of the Year.

Halaby has two living siblings. His sister, Beatrice Halaby, will move to Hot Springs this summer. His brother, Tony Halaby. and his family live in Kirkland, Washington, a suburb of Seattle. Another brother, David, died the same year as Halaby’s twin brother, Ramzy; both David and Ramzy lived in California.

Teaching at Ouachita has afforded Halaby many opportunities to travel abroad for seminars and workshops. He has been to China three times, through Europe, including Italy and France, and to England. He spent time in Spain, traveling the El Camino, or Pilgrimage Road, to Santiago.

“I like to find nuances and metaphors in a lot of things,” he said with a smile. “I like to think my life has been a journey, a pilgrimage.”

Halaby said the next leg of his journey will be a cruise down the Danube River with his wife in October.

Until then, he plans to work in his garden.

“We live in town, but I have a very big garden,” he said. “I have so many friends. … I have at least 20 families that I give vegetables.”

“I also will keep writing,” he said. “I am working on my autobiography. I’ve written vignettes, tidbits; now I have to put it together.”

As he told colleagues and friends gathered recently at his retirement dinner, he plans to continue to write “in defense of the dispossessed, the weak and disenfranchised, and against bigotry and injustice.”

Halaby is also a frequent contributor to the CounterPunch website and has been published in the English edition of Le Monde diplomatique. He is often asked to speak on current affairs in the Middle East by a number of organizations, including churches.

Halaby attends First Baptist Church in Arkadelphia and is active in his Sunday School class.

“I think it’s very important to give back, hopefully even a fraction, of all the bounty of gifts that have come my way,” Halaby said.

“Life’s challenges can either make or break a person,” he said. “I opted for the first.

“And, OBU and Arkadelphia were my first homes in America, and have been wonderful homes for the past 50 years.”