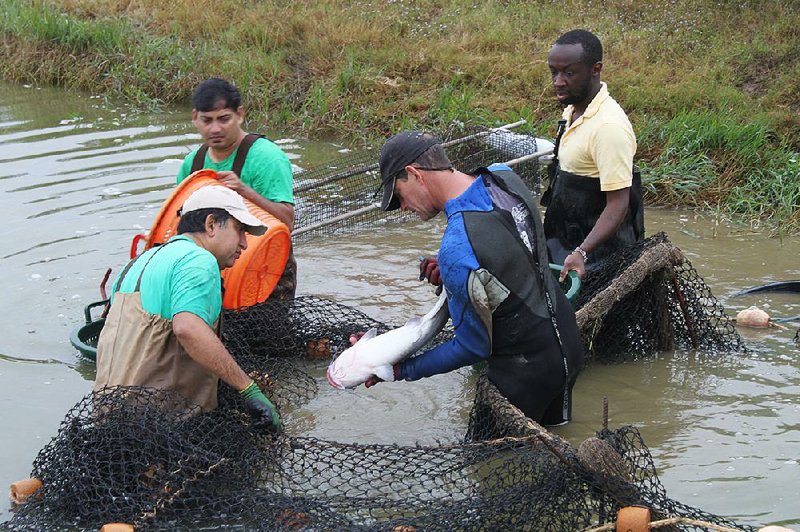 "What's happened is that we've shrunk down to our loyal customer base," said Joey Lowery of Searcy, a member of the executive board of Catfish Farmers of America. "We're processing about what we can sell."

Lowery and Ted McNulty, director of the Arkansas Department of Agriculture's Aquaculture Division, said that U.S. farm-raised catfish is mostly being sold to traditional catfish house restaurants, as well as other restaurants that feature locally-grown foods on their menus.

"The majority of all the fish being grown around the country goes to restaurants and to others, such as grocery store chains. That demand is pretty solid," McNulty said.

McNulty said growers are now getting from $1.25 to $1.30 per pound for their fish, up sharply from the roughly 85-cents per pound being paid just two years ago. He said fish prices, combined with lower feed costs, means that some producers are starting to think about adding pond acreage for the first time in years.

In Arkansas, acreage is expected to drop 15 percent in 2015, to 5,800 acres compared with 6,800 a year earlier, according to the U.S. Department of Agriculture's National Agricultural Statistics Service. At one time, Arkansas had more than 25,000 acres of ponds in production. Nationally, catfish pond acreage is expected to shrink this year by 10 percent, from 77,725 acres to 69,910 acres.

McNulty said that many farmers converted ponds into cornfields when corn prices spiked in 2012. However, corn and other row crop commodity prices have dropped sharply since then, which has helped to lower feed costs.

Poor returns combined with the reduction in acreage meant that many Arkansas catfish farmers got out of the business entirely, according to McNulty. He said the state still has about 50 producers left, half the number of just a few years ago.

The latest catfish production report released by the statistics service said that as of Jan. 1, Arkansas producers had slightly more than 9 million food-sized fish in their inventories, down 27 percent compared with the same period a year ago. However, the report also noted that the number of brood fish used to produce fish eggs, was up 75 percent and that the stocker fish total was up 30 percent, compared to a year ago.

McNulty said these increases indicated that growers are optimistic about future sales.

"If they see in the future a good price, then they'll make the investment," in fish, feed and acreage, he said.

Lowery agreed, but said that he was worried about an apparent shortage of fingerlings, which he said have become hard for farmers to obtain. The report noted that fingerling inventories were down 23 percent in January, compared with a year ago.

"I've heard of some guys not even filling ponds because they couldn't get fingerlings," Lowery said. It takes from 18 months to a year for a fingerling to grow into a food-size fish weighing more than a pound.

Jeremy Robbins, vice president of The Catfish Institute, a Jackson, Miss., industry trade group, said producers in other states are seeing the same trend as Arkansas.

"Anything that affects Arkansas, affects the entire industry, so its industrywide," Robbins said. "The general feeling around the industry is quite positive right now and that's a great thing for farmers who have been really struggling."

Robbins said about 90 percent of the seafood consumed in the U.S. comes from Asian countries, with catfish and catfish-like products making up up a small subset of that.

When the U.S. farm-raised catfish industry began, it had very little competition from other white fish, he said.

However, that changed with the competition from overseas, which resulted in the domestic farm-raised catfish industry contracting. Robbins said it's finally at a point where supply is matching demand, making it profitable for most parts of the industry. That, in turn, has allowed producers to focus on expanding regional markets.

McNulty and Lowery also expect catfish producers to get help from a new state law, Act 1191 of 2015, which requires retailers and restaurants to label as imported any catfish or "catfish-like product" produced in another country.

The law defines catfish as any species of the family Ictaluridae, the kind of fish raised in the U.S.

Catfish-like is defined as any species of the genus Pangasius, family Claridae or family Siluridae, which would include fish such as swai, basa and tra.

U.S. fish farmers have argued for years that fish imported from countries such as Vietnam and China are often incorrectly labeled as catfish and isn't grown to the same food safety standards that they are required to follow.

Roger Frazier, a supervisor at the Arkansas Bureau of Standards which is responsible for overseeing the new law, said it will take effect on Jan. 1, 2016, to give retailers and restaurants time to comply.

"If you go into a restaurant and the menu says 'fish sandwich,' if it's one of those species of fish, it's going to have to have the word 'imported' on it," he said. This, he said, will let consumers know that what they're buying isn't domestic farm-raised catfish, but some other fish.

Frazier said until the law takes effect, bureau inspectors will be working with businesses that need to follow the new labeling requirement.

Robbins said Arkansas is the fifth state to address the labeling of imported catfish and catfish-like products, joining Alabama, Louisiana, Mississippi and Tennessee.