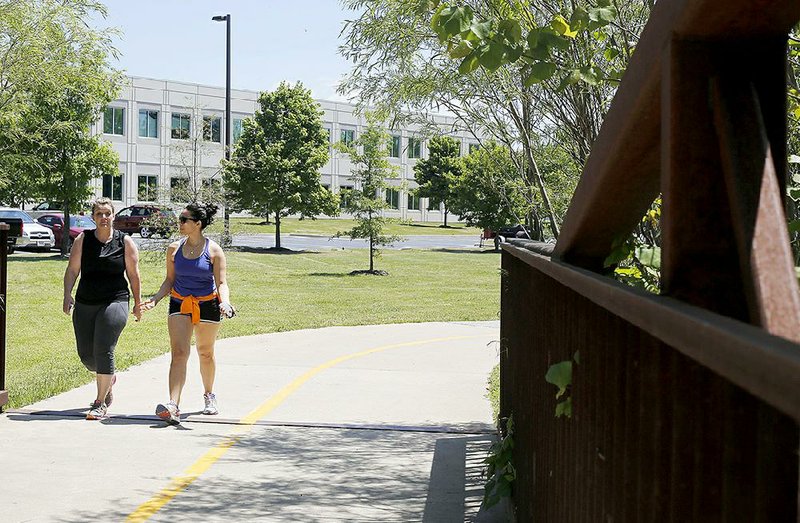 A portion of the Mud Creek Trail runs behind the new Procter & Gamble offices at 1303 E. Joyce Blvd. in Fayetteville.

FAYETTEVILLE -- The newly opened Razorback Greenway will provide plenty of opportunities for fresh air, scenic strolls and outdoor exercise. But the 36.9-mile trail, stretching from south Fayetteville north to Lake Bella Vista, also has some people in Northwest Arkansas seeing green -- as in dollar signs.

Chuck Flink, president of Alta/Greenways, the lead designer of the project, has said the approximately $37 million greenway, which officially opened May 2, will pay for itself several times over in the form of new business growth and bicycle tourism.

Fayetteville Chamber of Commerce President Steve Clark for years has referred to the city's trails as "ribbons of commerce."

"As a ribbon wraps around a package but comes together to connect in the center of the package for the bow, that's kind of what these ribbons do: They wrap around our community," Clark said earlier this month. "The idea is these ribbons go places that sidewalks and highways don't go."

He thinks people will use the greenway from Fayetteville to Bentonville to visit the Crystal Bridges Museum of American Art, maybe stopping along the way at the Springdale Farmers Market or Pinnacle Hills Promenade in Rogers.

"It allows you to enjoy the entire region without having once to get in your car," Clark said.

Dino and Melanie Vergura knew they wanted to open a coffee shop and restaurant on Emma Avenue in downtown Springdale after hearing about the greenway and plans for Shiloh Square and Walter Turnbow Park plaza and trailhead projects.

"When we heard they were doing a few-million-dollar renovation down there, we absolutely were excited to open a business," Dino Vergura said.

The couple is refurbishing an 80-year-old building across the street from Shiloh Square, just west of the trail crossing on Emma Avenue.

"I don't think we could have picked a better location," Melanie Vergura said.

Other Springdale businesses have announced plans to open within walking distance of the new trail crossing.

"Almost all of the momentum that's been picking up the past year and a half, I really believe it's because of the footsteps that the trail is causing in downtown," said Lisa Ray, vice president of the Downtown Springdale Alliance and president/chief executive officer of Arvest Bank Springdale.

The trails have also been attractive for developers of large commercial and residential projects, at least in Fayetteville, where the first link in the citywide trail system, the Mud Creek Trail, opened in 2003.

The Mud Creek Trail wasn't the reason Procter & Gamble chose to build a 64,000-square-foot office building on Joyce Boulevard in 2007, but Tim Marrin, a spokesman for the Fortune 500 company, said, "It was a benefit to moving where we are."

"It is something from a fitness standpoint that our employees take advantage of," Marrin added. "It's been a great asset to the team to have the trail so close."

The city's trail system wasn't the main reason that Specialized Real Estate Group decided to build in Fayetteville. The company's president, Seth Mims, has made it clear that the firm's recent large-scale apartment projects are going up because of growing enrollment at the University of Arkansas.

But, Mims said, trails do factor in to the locations company executives and their investment partners chose.

"We think that's one of the biggest amenities apartments can have," he said. "Bike trails create so many connections: to vital retail and restaurants, and connections to nature."

According to an analysis by Fayetteville's Geographic Information System Division, 48 percent of the 1,526 building permits the city issued since 2011 were for property within a half-mile of a trail. Because of Fayetteville's extensive trail system, almost half of the city's land is that close to a trail.

Marilyn Shoffit, a real estate agent with Crye-Leike Real Estate Services in Fayetteville, said the trails are something she hears about more and more from residential customers. A lot of homebuyers, especially young people, say they want to live close to a trail, Shoffit said, just like with parks or schools.

"It's very possible to live and work within the trail corridor," McLarty said. "That's what we wanted. This actually was designed to provide transportation alternatives, so people could get home or get to work or go to school."

The plan concluded that by increasing the percentage of people who walk or bike to work or school, the greenway has the potential to save residents millions of dollars each year in household transportation costs, health care costs and street maintenance costs, in addition to resulting in fewer vehicle crashes and reduced vehicle emissions.

The commission also anticipates millions of dollars of return on investment through bicycle tourism -- people who visit the area to ride on the greenway or participate in events like a square-to-square bike ride between the downtowns of Bentonville and Fayetteville.

Multiple states and cities with bike trails throughout the country have conducted economic impact studies to determine the value of bicycle tourism.

Bike trails and bike lanes along a 105-mile stretch of the Outer Banks, off the coast of North Carolina, cost $6.7 million to build. The North Carolina Department of Transportation estimates that bicycle tourism there generates $60 million in economic activity each year,.