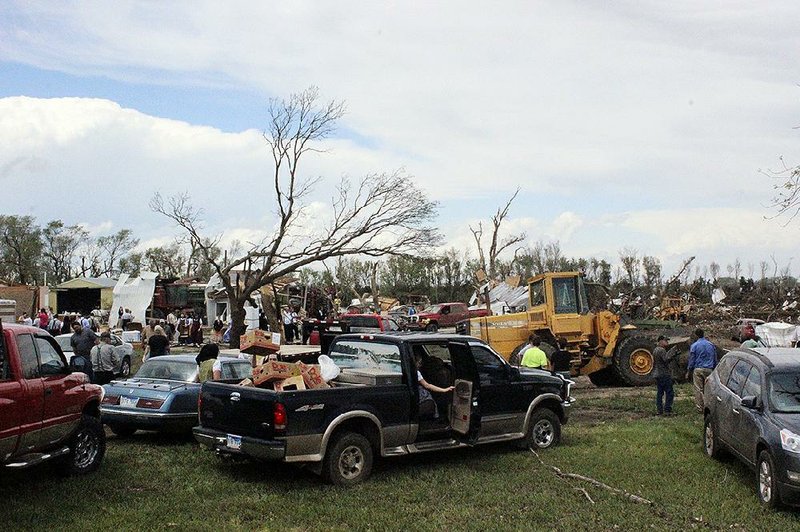 Dozens of people gather to help with cleanup at a farm that was severely damaged by a tornado Sunday in Delmont, S.D.

South Dakota was the center of weather extremes Sunday, with a tornado damaging a small town and injuring at least nine people on the eastern side of the state and more than a foot of snow blanketing the Black Hills to the west.

Several Great Plains and Midwest states were in the path of severe weather, including in North Texas, where the National Weather Service said a likely tornado damaged roofs and trees near Denton and torrential rain caused flash flooding. At the same time, a tropical storm came ashore in the Carolinas and wintry weather also affected parts of Colorado.

Tropical Storm Ana made landfall near Myrtle Beach, S.C., on Sunday morning and was downgraded to a tropical depression by Sunday afternoon.

The forecast also called for between 2 and 6 inches of rain over the affected regions, and coastal flooding, especially around high tide.

At 4 p.m. Sunday, the National Hurricane Center said the center of the depression was located about 10 miles northeast of Whiteville, at latitude 34.4 north and longitude 78.6 west. The storm's maximum sustained winds were at 35 mph. Gradual weakening was forecast over the next few days, according to the hurricane center.

In South Dakota, Gov. Dennis Daugaard said nine people were injured Sunday morning when a tornado tore through the tiny town of Delmont -- about 90 miles from Sioux Falls. None of the injuries was life threatening, and seven of the nine had been treated and released from the hospital, Daugaard said. There were no fatalities.

South Dakota Department of Public Safety spokesman Kristi Turman said about 20 buildings were damaged and that the town had no water, power or phones. The town was evacuated, authorities said.

"Our house is flat. There is nothing left," said Stephanie Lunder, 34, of Delmont. She was with her husband and four children in the basement when the storm hit. The tornado heavily damaged a church where children attending Sunday school were forced to retreat to the basement, residents said.

"One side of town was taken away," Delmont resident Anita Mathews said.

In North Texas, a likely tornado ripped roofs off buildings and damaged trees near Denton, about 40 miles northwest of Dallas, according to National Weather Service meteorologist Tom Bradshaw. There were no immediate reports of injuries or fatalities.

Jody Gonzalez, chief of Denton County Emergency Services, said the storm moved through the area so fast Sunday afternoon that it caused "very limited damage." He said some signs were blown over and some trees damaged.

Television footage showed portions of some industrial roofs ripped off.

Torrential rains led to widespread flash flooding in North Texas. People in Krum were being rescued by helicopter from rising floodwaters there.

Gonzalez said Sunday that multiple rescues had been performed for people in flooded streets and homes in the small town about 50 miles northwest of Dallas.

About 100 miles west of Fort Worth, people in the sparsely populated ranching and farming community of Cisco were left to clean up from Saturday's tornado that left one person dead and another in critical condition. Cisco Fire Department spokesman Phillip Truitt said the two people were near each other.

The National Weather Service said that tornado was rated an EF-3, with winds ranging from 136 to 165 mph. At least six buildings were damaged south of Cisco, as well as six others near Lake Leon, Truitt said.

A strong line of storms moved through the Dallas-Fort Worth area Sunday morning, forcing significant delays and a total of 100 flight cancellations at Dallas-Fort Worth International Airport and Dallas Love Field Airport.

Nearly 18 inches of snow fell in southern Colorado, a state that also saw hail, flooding and tornado warnings over the weekend.