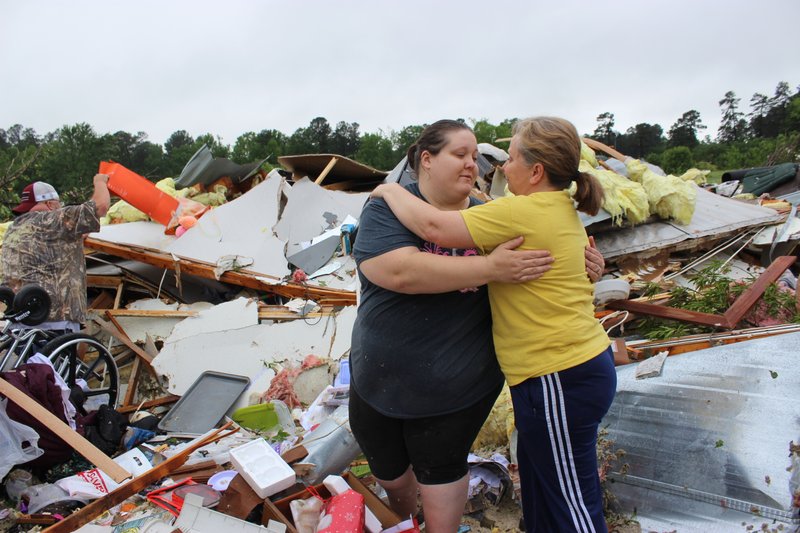 Tracy Mays, right, hugs Kimmie Godwin as the two look for items to salvage in the wreckage of Godwin's mother's destroyed mobile home in Nashville.

“It’s always difficult to see the damage inflicted by deadly storms and tornadoes. Our hearts and prayers go out to those in the Nashville area who were affected by the recent weather, especially the family of those who died from Sunday’s tornado," Hutchinson said in a statement.

NASHVILLE, Ark. — A man and woman died here when a tornado ripped apart their mobile home late Sunday night, but their young daughter survived even as the home she was in was reduced to rubble, authorities said Monday.

Two others were seriously injured and several other minor injuries were reported in the late-night storm, which the National Weather Service preliminarily rated as EF2 with winds greater than 125 mph.

The destruction at the D&J mobile home park where Michael and Melissa Mooneyhan were killed was severe. Their trailer and three others were blown off their foundation and torn apart, scattering pieces of metal siding, insulation and possessions into neighboring yards and surrounding fields.

Howard County Sheriff Bryan McJunkins said the tornado arrived in Nashville after 11:20 p.m. He said the local hospital had eight patients with injuries sustained in the storm. Six were treated and released and two were sent to other facilities with more serious injuries.

The Mooneyhan's little girl, who authorities estimated was 2 or 3 years old, was not believed to be hurt and was released to a family member.

"It's a miracle," McJunkins said, adding later this is the worst storm the area has endured in recent memory. "I've been working for the county a little over 17 years and I've not seen anything like this in the city of Nashville. We've had some surrounding areas that have been hit. I do not remember a fatality from one."

Kimmie Godwin's mother's trailer was one of the destroyed homes. Godwin, along with several friends, worked Monday to sift through the debris, looking for anything they could salvage. Her mother sat in a parked car nearby, watching and wiping tears from her eyes.

Godwin said she also felt strong emotions looking through the ruins of what had been her childhood home.

"It's devastating," she said, standing in the wreckage and clutching a photo album turned soggy by the rain. "This is the trailer I grew up in. I brought both of my kids home here."

Godwin's mother left the trailer just in time, said Jimmy Weeks, her brother-in-law who was also helping look for salvageable items. She had been in the shower and at first didn't hear family members calling to warn her of the impending system. When she finally answered, the deadly storm was close.

"She jumped in the car and came to our house," Weeks said. "And then it hit."

Jim Ewert is a nine-year resident of the trailer park, a community he called "close-knit." Ewert said he heard the sirens and was sitting inside his nearby parked camper when he "saw the trailers just start to disappear."

After it passed, Ewert went to the heavily-damaged area. At least one person already outside had suffered a serious back injury, he said, and search-and-rescue crews soon arrived to look for two people who were missing.

"You were hoping to find them alive," he said. "But from the condition they were in, you knew you weren't going to."

Ewert said he was there was the crews found the Mooneyhans' bodies and that rescuers reported then that the little girl was found between them. McJunkins said he didn't know where she was found in the wreckage.

The sheriff said it's difficult to see people's lives taken or upended by the storm.

Mayor Billy Ray Jones said residents are still cleaning up after reports of tornadoes Sunday night. It's unclear how many homes were damaged but Jones said at least two people were injured. Jones said there are no people missing.

The storms moved through Sunday night into Monday, dropping heavy rain across much of the state. A large swath of the state remained under a flash flood watch through 9 a.m.

In central Arkansas, the Bryant School District said that because of heavy rain and flooding, the district would be unable to run some of its bus routes Monday and that some students would not be picked up.