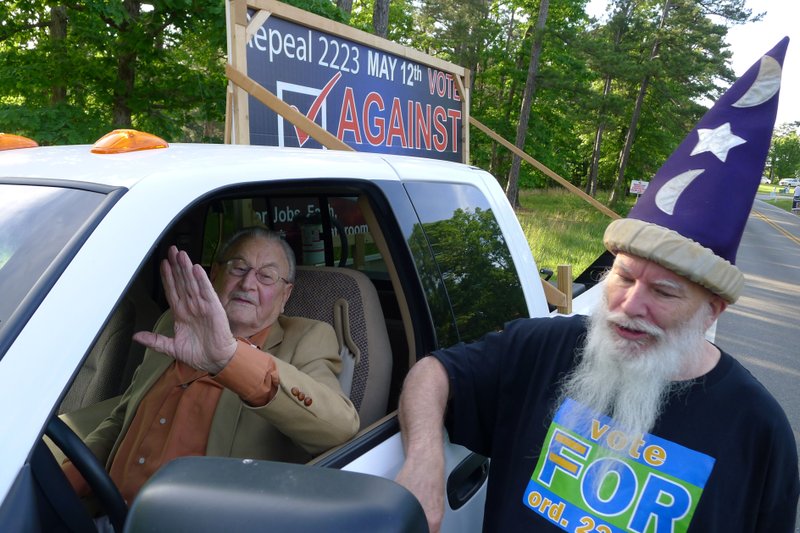 Rene' J. Chouinard, left, and Christopher Young have an intense but amicable conversation on Tuesday near a polling place in Eureka Springs. Residents were voting Tuesday to decide whether to keep the city's anti-discrimination ordinance. Young, 69, was arguing in favor of the ordinance. Chouinard, 88, was arguing for repeal and carried a sign saying so in the bed of his pickup truck. Young said he wears his wizard's hat to help diffuse tense gatherings in the tourist town.

The complete but unofficial results were:

Lamont Richie, a Carroll County justice of the peace who drafted Ordinance 2223, spoke to a crowd of about 100 people celebrating the victory at the For 2223 headquarters on Spring Street.

"What is really special about tonight is that we are all legal," said Richie. "We are the only community in Arkansas that legitimizes a broad range of people."

For the past three months, Eureka Springs has had the broadest law in Arkansas prohibiting discrimination against people on the basis of sexual orientation or gender identity.

The Eureka Springs City Council passed Ordinance 2223 on Feb. 9. It provides anti-discrimination protection for residents and visitors in areas of employment, housing and public accommodations.

Some cities in Arkansas -- including Eureka Springs -- have similar laws that prevent discrimination against city employees or contractors, but Ordinance 2223 goes beyond that.

Richie said Little Rock passed an ordinance that "only applies to their employee handbook."

"We did ours 10 years ago," Richie said of a similar law in Eureka Springs. "Our handbook was changed to recognize the equality of the LGBT [lesbian, gay, bisexual and transgender] community. These [other] communities are just getting around to it now."

Mayor Robert "Butch" Berry said it was a historic moment for the people of Eureka Springs.

"The supporters of this ordinance have been so positive, and I think that's been a lot of the reason the ordinance passed so overwhelmingly because it's also a positive ordinance," said Berry.

Alderman Mickey Schneider said she was happy with the 71 percent victory.

"I thought it would be 80 percent because of how passionate Eurekans are," she said.

Alderman James DeVito was also happy with the outcome.

"It's a good thing for Eureka Springs, the state of Arkansas and the country in general," said DeVito. "If there was any question, that vote margin sealed the deal right there: 71 to 29 percent, that left no uncertainty about how Eureka Springs feels about civil rights."

Opponents of the ordinance include religious leaders who believe that it will force churches to host same-sex weddings or face fines.

Randall Christy of Ada, Okla., chief executive officer of the Great Passion Play near Eureka Springs, said voter turnout was low in part because Christians were afraid to vote. The election drew 48 percent of the town's 1,705 registered voters.

Christy said one man who put out a sign reading Repeal 2223 found his car windows smashed the next day. Others found maggots in their mailboxes.

Christy said he has had his life threatened over the issue.

"I don't think people understand the kind of people we're dealing with in Eureka Springs," said Christy. "There is an infill of very vile, radical, vicious people in this town. They have gone around intimidating people to the point that they were afraid to get out of their homes today. This is not sour grapes. The people have voted. The Bible-believing Christians did not have the guts to get out and vote."

Christy said he's referring to a small number of intimidators, and he wants Christians to go to Eureka Springs to see the town and the Passion Play.

"I think Eureka Springs is beautiful," said Christy. "I think it is a wonderful place for people to come to. I don't think tourists have anything to worry about at all."

Soon after Ordinance 2223 passed, an opposition group called Repeal 2223 started a petition drive to call for a citywide referendum. So the City Council pre-emptively set an election for Tuesday to let voters decide the issue.

Travis Story, a Fayetteville lawyer who represents Repeal 2223, said he was disappointed with voter turnout.

"Some of the Christian and church members stayed home," said Story. "Several people potentially were threatened, trying to influence votes. I'll use the word bullying. The biggest issue I have is this is an issue that should be decided at the state level, not in these individual cities."

Late Monday afternoon, a dozen people stood in front of the city's only polling place, St. Elizabeth Parish Center, holding signs reading either For 2223 or Repeal 2223. A fiddle player serenaded the group from his place in front of a 20-foot-wide Repeal 2223 banner that others had unfurled alongside Passion Play Road.

'For' signs outnumbered 'repeal' signs along the road by about 3-to-1, but the 'repeal' contingent had by far the biggest sign.

Rene' J. Chouinard, 88, of Eureka Springs, drove his pickup up and down Passion Play Road with a 'repeal' sign in the truck bed. The width of the pickup nudged sign-holders back behind the white line along the side of the road.

Christopher Young, 69, of Carroll County, finally waved Chouinard over so they could talk.

Young -- who has a long, white beard -- was wearing a purple, pointed wizard's hat. Young said he occasionally wears the hat to diffuse tense situations in the tourist town.

The two men had an intense but amicable conversation on the issue of gay rights. Young spoke in favor of Ordinance 2223. Chouinard spoke against it. The men realized they're both engineers.

Chouinard said he moved to Eureka Springs from Connecticut in 2000, but the town has changed since 2004. More shops and businesses are closed, and he blames it on gay people flaunting their lifestyle in one of Arkansas' most permissive enclaves.

"If they want to use Eureka Springs to come out of the woods, that's fine, but I don't want them to go down the street playing with each other," Chouinard told Young. "I myself walking downtown saw people grabbing each other's can in front of people. ... We're getting too permissive in this town, much too permissive, and I don't like it. If they want to come to this town, they're welcome, but be civilized."

The council rushed the ordinance through three readings at a Feb. 9 meeting -- passing it unanimously each time -- so it would become law before the state Legislature passed a bill preventing Arkansas cities and counties from enacting or enforcing such ordinances. Act 137, sponsored by state Rep. Bob Ballinger, R-Hindsville, passed Feb. 24 and will go into effect July 20.

"Ours will become basically ineffective at that point," he said. But Eureka Springs could have a part to play when the issue goes to court, and it will go to court, said Berry.

DeVito said Eureka Springs has given civil-rights benefits to its residents, and the state plans to take those rights away from them in July.

A similar ordinance was passed by Fayetteville's City Council last year, but it was repealed in a citywide vote Dec. 9 after the Fayetteville Chamber of Commerce waged a vigorous campaign against it.

Also on Tuesday, voters in Berryville approved the extension of a 0.5 percent sales tax that goes in part to help police and fire.

The complete but unofficial results were: