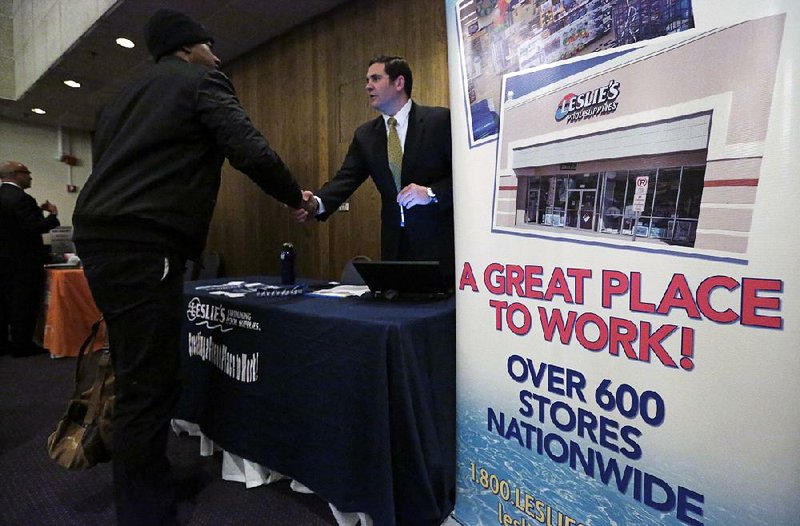 A representative of a swimming pool supply company greets a job seeker last month at a career fair in Chicago.

WASHINGTON -- Job openings fell in March from a 14-year high as companies held off posting vacancies amid a first-quarter slump in economic growth.

The number of positions waiting to be filled decreased by 150,000 to 4.99 million from a revised 5.14 million in February, the Labor Department reported Tuesday in Washington. Even with the decline, it was the second-highest level since 2001.

The data showed more employees quit than at any time in the past seven years, and firing and hiring also accelerated, pointing to an increase in churn that is more typical of a healthy job market. While it may be difficult to match the gains seen at the end of 2014, a report last week indicated the payroll slowdown in March was temporary.

"The pace of employment growth in the U.S. had decelerated and is likely to be somewhat lower this year than it was last," Russell Price, senior economist at Ameriprise Financial Inc. in Detroit, said before the report. "We're at a more mature phase in the economic recovery, so there's less slack available and less need for companies to catch up for their labor needs."

The median forecast in a Bloomberg survey projected there would be 5.11 million openings in March, down from a previously reported 5.13 million the month before.

The Job Openings and Labor Turnover Survey, or JOLTS, adds context to monthly payroll figures by measuring dynamics such as resignations, help-wanted ads and the pace of hiring. Although it lags the Labor Department's other jobs data by a month, Federal Reserve Chairman Janet Yellen follows the report as a measure of labor-market tightness and worker confidence.

The number of people hired climbed to 5.07 million in March, the most so far this year, from 5.01 million the previous month. The hiring rate was unchanged at 3.6 percent. The gauge calculates the number of hires during the month divided by the number of employees who worked or received pay during that period.

Some 2.78 million people quit their jobs in March, the most since April 2008. The quits rate, which shows the willingness of workers to leave their jobs, increased to 2 percent in March from 1.9 percent the month before. It matched the reading when the recession started more than seven years ago, indicating employees are becoming confident they can find other jobs.

About 1.79 million were dismissed from their jobs in March, up from 1.69 million the previous month and the most since July.

In the 12 months that ended in March, the economy created a net 3 million jobs, representing 59.7 million hires and 56.7 million separations.

Tuesday's report also showed about 1.7 unemployed people were vying for every opening in March, compared with 1.8 when the recession began.

Labor Department data published last week showed payrolls climbed by 223,000 in April after an 85,000 increase in March that was worse than previously reported. That compares with an average monthly gain of 259,670 in 2014.

Fed policymakers are monitoring improvement in the labor market alongside the pace of inflation as they consider the timing of their first interest-rate increase since 2006. The central bank has said it will raise its benchmark federal funds rate when it sees further labor-market improvement and is "reasonably confident" inflation will rise back to its 2 percent goal over time. Most economists in a Bloomberg survey late last month predicted the central bank will start tightening in September.