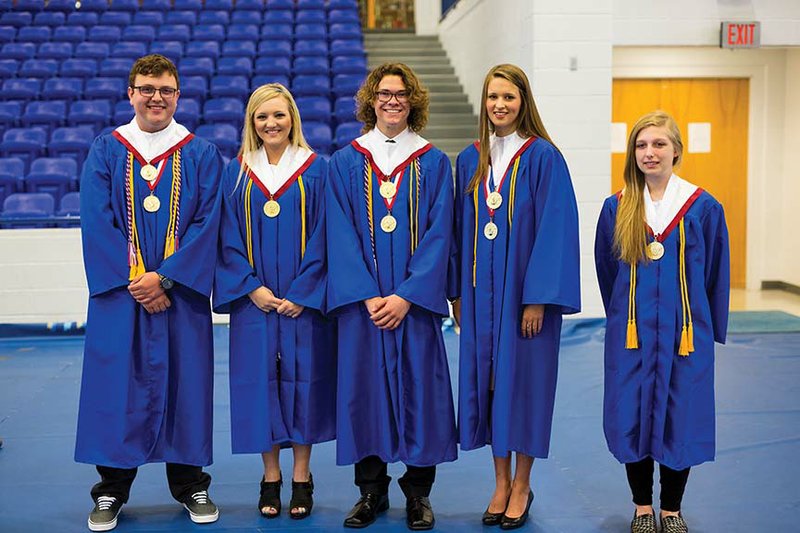 Five Greenbrier High School seniors and the school district will make history today when the students are awarded associate degrees from the University of Arkansas at Little Rock along with their high school diplomas. The students, from left, are William Ratliff, Hailey Marcus, Jackson Hedrick, Emily Chambers and Jenna Kirk. The GHS-UALR Associate Degree Program is the first in the state.

History is being made in Arkansas today as five Greenbrier students graduate not only with their high school diplomas, but also with associate degrees from college.

The seniors will receive the degrees through what Superintendent Scott Spainhour called “an extraordinary partnership” between the University of Arkansas at Little Rock and the Greenbrier School District.

“Greenbrier is the first school in Arkansas to achieve this,” Spainhour said during Tuesday’s high school awards assembly in Panther Pavilion.

The seniors who will receive associate degrees from UALR are Emily Chambers, Jackson Hedrick, Jenna Kirk, Hailey Marcus and William Ratliff, all honor or highest-honor graduates.

Marcus said knowing she is part of history is exciting.

“It makes me want to jump up and down,” she said before the awards ceremony.

Spainhour praised the UALR-GHS Associate Degree Program as a way to save families tuition costs and promote early completion of college degrees. He also said the program introduces students to college work in “a familiar and nurturing setting.”

Many people in the Greenbrier School District were involved in the “game-changing initiative,” Spainhour said. “It was a lot of work.”

He credited Susan Jackson, the district’s director of college and career readiness and secondary curriculum, with having “the vision.”

Jackson said Greenbrier High School has offered concurrent-credit college courses for more than 10 years, but she realized enough hours were being offered for students to earn associate degrees. Students were graduating with 60 hours, enough for a two-year degree, but no program existed.

The 60 hours of classes were “virtually free” for the students, Jackson said. Although the students paid $50 per class, tuition per class would have cost $850 at UALR, she said. The school district provided the instructors and textbooks, she said.

Deputy Superintendent Lisa Todd said one of the reasons the program worked was the “phenomenal faculty” at Greenbrier High School. Teachers had to be certified to teach the college-level classes and had to follow the same curriculum as the university’s professors.

The students said they didn’t know until after Christmas that they could earn the degrees, Chambers said.

“We all just started taking upper-level courses, and [the administrators] said, ‘You all have this many hours; you just need this many more for your associate degree,’” Chambers said. “I said, ‘Might as well.’”

Chambers, who is graduating with highest honors, said she and others in the group had to adjust their class schedules to make it work.

Ratliff, who also is graduating with highest honors, said he had to add Honors Physics 2 and personal finance to his schedule.

The five students confirmed that the classes were rigorous.

“Yes, ma’am,” Ratliff said. “For me, the hardest part was psychology. It’d be, ‘OK, we have a test next week — you better know all these terms,’” he said.

“And read 40 pages by next week,” Marcus said. She said the psychology class was the “most realistic” to college.

Ratliff said he plans to enroll at the University of Arkansas at Fayetteville with the goal of becoming a pharmacist, but he is going to major in music education and minor in chemistry to have more options.

Chambers said her biggest challenges were chemistry and physics, taught by Darrin Gainer.

“It got to the point he would text us homework at night for the AP test,” she said.

Hedrick, who is also graduating with highest honors, said working toward the associate degree made him a better student.

“I definitely learned good time-management skills and how to work efficiently,” he said.

“I just feel like I’m ready for college now,” Chambers said. Chambers said she is going to UCA and wants to become a pediatric oncologist.

Kirk said she is going to major in music education at Henderson State University in Arkadelphia. Hedrick said he plans to attend the University of Arkansas at Fayetteville and major in chemical engineering.

Each of the students has a game plan for college.

“We kind of have to know what we want to do because we’re going in with all our gen eds,” Chambers said. “If we don’t, we’re kind of in a pickle.”

Marcus, who said her goal is to become a surgeon, is going to attend Harding University in Searcy.

“I feel like this program is going to help a lot of students financially,” she said.

The students all agreed that their parents are proud of their accomplishments.

Jackson said the community has been “very appreciative” of the program. “We’ve had a lot of positive response from parents, business leaders and community members.”

She said the district expects the program to grow each year, and next year’s ninth-graders will be the first class to work toward the associate degrees from the get-go.

She said one of the most important aspects of the UALR-GHS Associate Degree Program is its potential to impact the state.

“Arkansas ranks 49th at any given time in the number of college graduates per capita. This is our way of, hopefully, not only opening doors for Greenbrier students but for the rest of the students in Arkansas,” Jackson said. “If we can serve as a model for creating opportunities for students’ success at the college level, then that is the vision for Greenbrier High School and the University of Arkansas at Little Rock.”