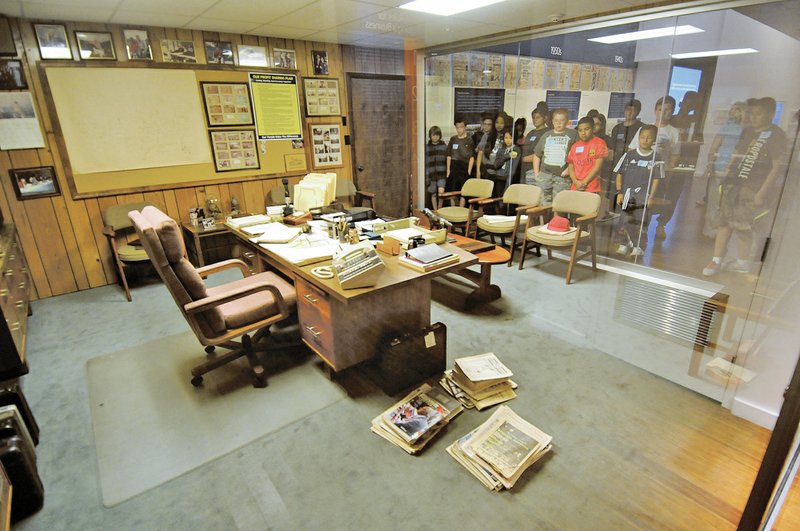 Students from Helen Tyson Middle School peer Wednesday into Sam Walton’s office at the Walmart Museum. The office looks the same as it did when Walton died. ( NWA Democrat-Gazette / J.T. Wampler)

Bentonville's main street was reminiscent of the 1950s Saturday as families ate ice cream cones, gyrated in hula hoops and showed off their twist dance moves while celebrating the 25th anniversary of the Walmart Museum.

The museum since May 1990 has been telling the story of the company's rise from a Bentonville mom-and-pop shop to the nation's -- and eventually, the world's -- leading retailer.

"It is the story of entrepreneurship and drive," said Alan Dranow, Walmart Heritage Group senior director. He said the story is educational and inspirational.

The museum, at 105 N. Main St., originally opened as the Wal-Mart visitor center, Dranow said. He said it was focused on teaching Wal-Mart employees about the company. It also was used as a recruiting tool.

"We found out over the years that everyone hungers for a story like this," Dranow said.

Founder Sam Walton's personal items were placed in the collection after his death in 1992, Dranow said. He said a 1979 custom Ford F-150 quickly became a symbol of Walton's values.

The story of the truck has become a legend, Dranow said. He said, at times, spontaneous lines form in the museum as visitors wait to touch the truck's door handle.

"Legend has it, if you touch the door handle, you will be rewarded with the gift of frugality," Dranow said.

Melanie Moncur of Bella Vista reached for the door handle Saturday after hearing of the legend.

Moncur was showing the museum to Woodbury, who was visiting from Ankeny, Iowa.

"It is really interesting," Moncur said. "It was fun to see the store because it is exactly the way stores looked when I was a kid. The boxes and even the way they are put on the shelves."

The store and soda fountain shop are in the front of the museum where the Waltons' five-and-dime first opened in 1950. Dranow said the store and shop give visitors an idea of what businesses looked like at that time.

There was a soda fountain shop in the building previously, Dranow said.

"It was something Sam bonded with Alice [his daughter] over," Dranow said. "I know it has brought back very good memories for Alice."

Anna Dean, 12, bonded with family members Saturday as she learned how to do the twist from her mother.

"I have never done the twist before," Anna said. "It was fun."

Anna twisted her hips with a crowd of about 40 to songs such as "Twist and Shout." Another girl swayed back and forth while holding her dog. In the back, a man tasted an ice cream cone while swinging the arms of his toddler daughter.

"We are here to be a part of the community," Dranow said. "Our mission is to engage, inspire and educate."