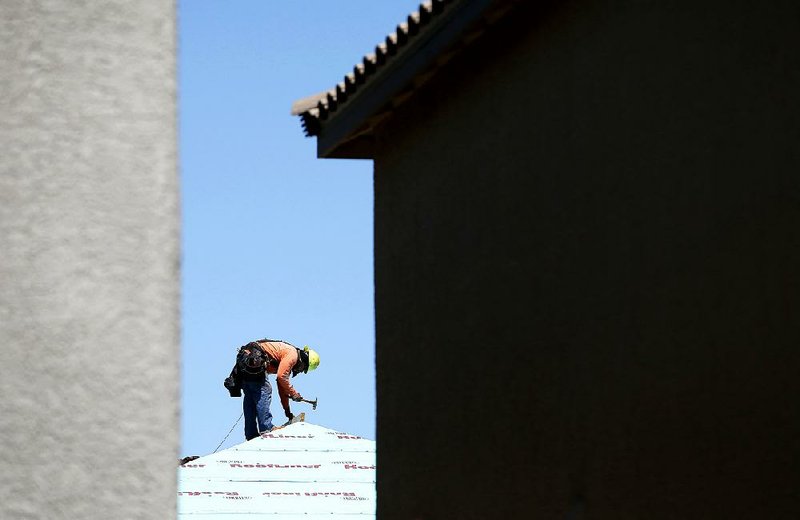 A worker frames a home at a housing development in Las Vegas last month.

U.S. homebuilders are feeling slightly less confident about their sales prospects, a reflection of the sluggish start to this spring's home-selling season.

The National Association of Home Builders/Wells Fargo builder sentiment index released Monday slipped to 54 this month, down two points from 56 in April.

Readings above 50 indicate more builders view sales conditions as good, rather than poor. The latest reading is up nine points from a year ago.

Measures of current sales conditions and traffic by prospective buyers also fell. Builders' outlook for sales of single-family homes over the next six months edged higher.

"Consumers are exhibiting caution and want to be on more stable financial footing before purchasing a home," said the association's chief economist, David Crowe.

Sales of new U.S. homes plummeted 11.4 percent in March, as the spring buying season opened with sharp declines in the Northeast and South, according to the Commerce Department. New-home sales slid to a seasonally adjusted annual rate of 481,000, a swift reversal from an annual sales pace of 543,000 in February, which had been the strongest performance in seven years.

Even so, sales for the January-March period increased versus the same quarter last year.

Winter storms in January and February closed construction sites and likely pushed back potential sales this spring, traditionally the peak period for home sales, to later in the year.

Job gains over the past year have put homebuyers in a stronger financial position, which also points to stronger sales this year. And the average rate on a 30-year, fixed-rate mortgage remains low by historic standards. Last week it stood at 3.85 percent. A year earlier, the rate was 4.20 percent.

Builders remain optimistic that sales will pick up. The association's index of future sales expectations has been tracking upward all year.

The latest index was based on responses from 298 builders. Its measure of current sales conditions for single-family homes declined two points to 59, while a gauge of traffic by prospective buyers dipped one point to 39. Builders' outlook for sales over the next six months rose one point to 64.

Though new homes represent only a fraction of the housing market, they have an outsize impact on the economy. Each home built creates an average of three jobs for a year and generates about $90,000 in tax revenue, according to association data.