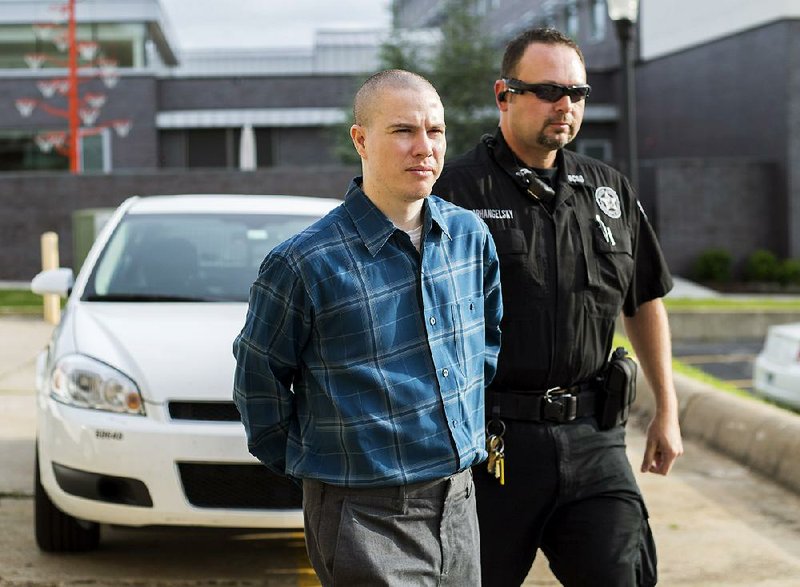 Zachary Holly is escorted into the Benton County Courthouse in Bentonville on Tuesday, May 19, 2015, for his trial in the murder of 6-year-old Jersey Bridgeman.

Holly, 30, of Bentonville, was charged with capital murder, kidnapping, rape, and residential burglary in connection with the kindergartener’s Nov. 20, 2012 abduction from her bedroom. He was found guilty on all charges.

The next phase of the trial will decide whether Holly will be sentenced to death or life in prison.

Her body was found in an abandoned house next to Holly’s home on Southeast A Street in Bentonville. She was found nude and face down with her pajamas wrapped around her neck.

Jurors then listened to closing statements from the attorneys.

Nathan Smith, Benton County’s prosecuting attorney, told jurors that Holly kidnapped Jersey Bridgeman from her home and carried her to the abandoned house.

“He stripped her of her clothing and laid her down on the filthy and disgusting floor and raped her,” Smith said.

Holly then used the girl's pajamas “to strangle the life out of her,” Smith said.

Smith told jurors that there is medical evidence that Holly engaged in sexual contact with the girl and his DNA was found on her shirt and DNA found in her body also pointed toward Holly.

A photograph of Jersey’s body was displayed on two screens in the courtroom as Smith spoke.

“No one likes to see these pictures,” Smith told jurors. “As ugly and awful as it is, that is the evidence.”

Some people in the courtroom were crying as Smith talked about Jersey’s death.

Smith recalled the medical examiner’s testimony that Jersey was scratching her neck as she was being strangled in her attempt to get the pajamas off her neck.

Smith told jurors that there is overwhelming evidence of Holly’s guilt and he urged the panel to find Holly guilty of the four charges.

Golden then gave his closing remarks. “I want to scream from the mountain top that he didn’t do this,” Golden said. “In this case I can’t do that.”

Golden admitted that Holly had sexual contact with the girl and caused her death. However, Golden questioned whether Holly’s actions were premeditated or deliberate.

Golden said Holly is not smart and could not even spell his middle name. Holly’s actions were a reaction after having sexual contact with the girl and leaving his DNA on her body, according to Golden.

He urged jurors not to consider sentencing during their deliberations.

The jury watched and listened to a recording of Holly confessing to two Bentonville police detectives that he took the girl from her home and carried her to the abandoned house where he then raped and killed her.