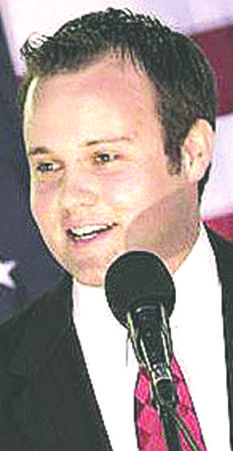 SPRINGDALE — Josh Duggar resigned as director of a conservative lobbying organization Thursday following the disclosure of allegations of sexual misconduct when he was a teenager.

Duggar, 27, of Washington is the oldest son of Jim Bob and Michelle Duggar of Tontitown, stars of the popular reality TV show 19 Kids and Counting, which airs on the TLC Network. Josh has appeared on the show since he was a teenager.

Jim Bob Duggar was state representative from 1999 until 2003 and candidate for U.S. Senate.

Josh Duggar released a statement to People magazine Thursday and later posted on his Facebook page he resigned from his position at the Family Research Council, a conservative lobby. The statement said in part:

“Twelve years ago, as a young teenager, I acted inexcusably for which I am extremely sorry and deeply regret. I hurt others, including my family and close friends. I confessed this to my parents who took several steps to help me address the situation. We spoke with the authorities where I confessed my wrongdoing, and my parents arranged for me and those affected by my actions to receive counseling. I understood that if I continued down this wrong road that I would end up ruining my life.”

Family Research Council president Tony Perkins released this statement later Thursday: “Today Josh Duggar made the decision to resign his position as a result of previously unknown information becoming public concerning events that occurred during his teenage years. Josh believes that the situation will make it difficult for him to be effective in his current work. We believe this is the best decision for Josh and his family at this time. We will be praying for everyone involved.”

The resignation follows two days of media reports of allegations Duggar improperly fondled five girls during 2002 and 2003, but the incidents weren’t investigated until after the statute of limitations on the alleged crimes had expired. InTouch magazine first reported on the story Tuesday.

Details in a 2006 Springdale police investigation report match with the statements given to People by Duggar and his parents. The Northwest Arkansas Democrat-Gazette acquired a copy of the report late Wednesday via the Arkansas Freedom of Information Act. The report is heavily redacted and doesn’t include identifying information regarding the juveniles involved.

The report only became public due to an accident involving a long forgotten letter found in a book, according the the report.

Springdale police began looking into the case in December 2006 when officers were notified of allegations of improper touching in the Duggar home in the letter. The report says the letter, written three and a half years earlier, had been found in a book loaned by a family friend of the Duggars to someone else.

According the the report, an investigator identified as “W. Taylor” called Michelle Duggar the day the tip was received and was told the family was in Chicago, Ill., to appear on Oprah Winfrey’s television show and wouldn’t be back in Arkansas until the following Monday.

The report says staff members for Harpo Studios, producer of Winfrey’s show, received an e-mail that warned of the allegations. Studio staff members faxed a copy of the e-mail to the Arkansas State Police on the same day as the anonymous tip was received, according to the report.

The email said, in part, “I think you should know the truth before they make a complete fool of you and your show. They have been on TV before and come across as a perfect family, which couldn’t be further from the truth,” according to a summary in the police report.

The person accused admitted to the actions, was disciplined and eventually sent to Little Rock for counseling for three months in March 2003. The decision to send the person to counseling was made after Jim Bob Duggar consulted with leaders of his church.

After returning from counseling, the person was taken by Jim Bob Duggar to an Arkansas State Police corporal. That officer gave the perpetrator “a very stern talk” but didn’t report the matter to child abuse investigators, the report quotes Jim Bob Duggar as saying.

On Dec. 20 of that year, investigators concluded the statute of limitations precluded any possible sexual assault charges. The case was sent to the Washington County prosecutor for review. Circuit Judge John Threet, a deputy prosecutor at the time, said he didn’t recall the case but wouldn’t be allowed under the law to comment on the matter even if he did.

The sealed Washington County Circuit Court file for “Josh Duggar vs. the Arkansas Department of Human Services,” CV 07-921, was found by a Northwest Arkansas Times reporter, who now works for the Northwest Arkansas Democrat-Gazette, in 2007. A trial in that case took place Aug. 6, 2007, according to notes attached to the file. Sealed cases aren’t supposed to be left in public view, but the Duggar case file had been left in a stack of routine court filings at the circuit clerk’s office. The reporter saw no other information on the case at the time.

Amy Webb, spokeswoman for the state Department of Human Services, said she couldn’t comment on any case involving a juvenile and couldn’t confirm or deny there had been a case, she said Wednesday.

Both Josh and Jim Bob Duggar were asked about the case in 2007, and both declined to comment.

Messages to Jim Bob Duggar left through Facebook and e-mail through the Duggar family’s official website also weren’t returned. A caller identifying himself as Josiah Duggar, another child of the Duggars, called to ask what the request for an interview was about, and said any questions would have to be answered by his father.

A call about the allegations against Josh Duggar to TLC’s studio headquarters in Silver Spring, Md. was transferred to legal department of the parent company, Discovery Communications, also of Silver Spring. A message left there wasn’t returned Wednesday or Thursday.

A special two-hour episode of the Duggars’ show on May 5 drew 3.6 million viewers. The popular series featured Josh Duggar as a teenager. Since the show began in 2008, Josh Duggar grew up, married and moved to Washington.