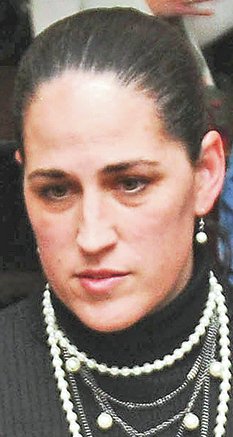 BENTONVILLE -- School Board member Rebecca Powers issued a statement Friday defending herself against criticism of a comment she posted on Facebook about a student.

"I am disappointed that the media has run a story that I have 'bullied' a student in (the Bentonville School District), when it is untrue," Powers wrote in an email.

Powers acknowledged responsibility for a post on a Facebook page called "Protect OUR Children BPS" in which she referred to a student involved in a rally outside Bentonville High School on May 8. The rally was held to support adding sexual orientation and gender identity to the list of protected statuses under the district's Equal Employment Opportunity policy.

"The young lady that is heading this up is an atheist," Powers' post read. "She is also rude, and disrespectful. I had the displeasure of watching her at the Mary Beth Tinker event at BHS. She was reprimanded for her behavior that day by school officials."

The post was later deleted, but not before some in the community took note of it.

Paula Mantel said during the public comment period at Monday's School Board meeting Powers was referring to Mantel's daughter, Victoria Mantel. Paula Mantel accused Powers of "cyberbullying" and said the comment Powers had made was untrue.

Powers said in her email Friday she decided not to comment on the matter, hoping the claim against her wouldn't become an issue, "out of respect for student privacy."

"It has, so let me be clear: I personally observed teachers verbally reprimand 'a student' for rude and disrespectful behavior that I personally observed at a public event. It is not 'bullying' to state an opinion that an unnamed student's behavior was 'rude and disrespectful,' or to comment on potential motivations for that behavior," Powers wrote.

She didn't identify the student in her post, she said.

"Supporters of the 'Name and Shame' campaign who are stalking my Facebook posts are the ones who have publicly identified and named a particular student," Powers wrote.

She added her post was never intended for public display, but was inadvertently posted where it could be seen by others beyond those for whom it was intended.

"My comment was meant only for private discussion, and was inadvertently posted in a public group instead," she wrote. "However, I am sincerely sorry that these remarks became public, and I sincerely apologize for any hurt this has caused to any student who believes I was identifying them.

"As usual in debates about homosexuality and cross-dressing, when these divisive issues are forced on school boards by those who wish to normalize harmful behaviors to impressionable children, supporters of these categories make accusations of 'bullying' when confronted by the truth," Powers wrote.

Board member Grant Lightle last month suggested adding sexual orientation, gender identity, veterans and parental and marital status to the district's Equal Employment Opportunity policy. Powers has firmly opposed the proposal. The board has not decided the matter yet.

In response to Powers' comments, Paula Mantel wrote in an email, "We've expressed our thoughts publicly already and are reviewing our options."

Gretchen Bellamy and Amy Gillespie, who run a group called Bentonville Public Schools Citizens for Equality, said in a statement they remain committed to their goal of adding inclusive language to the Equal Employment Opportunity policy.

"We feel the actions taken against a student by Ms. Powers are reprehensible, however, we see the issue of cyberbullying as separate from our stated mission," Bellamy and Gillespie said.

Travis Riggs, board president, declined to comment Friday, but said he intends to discuss the matter at the board's next meeting on June 1.