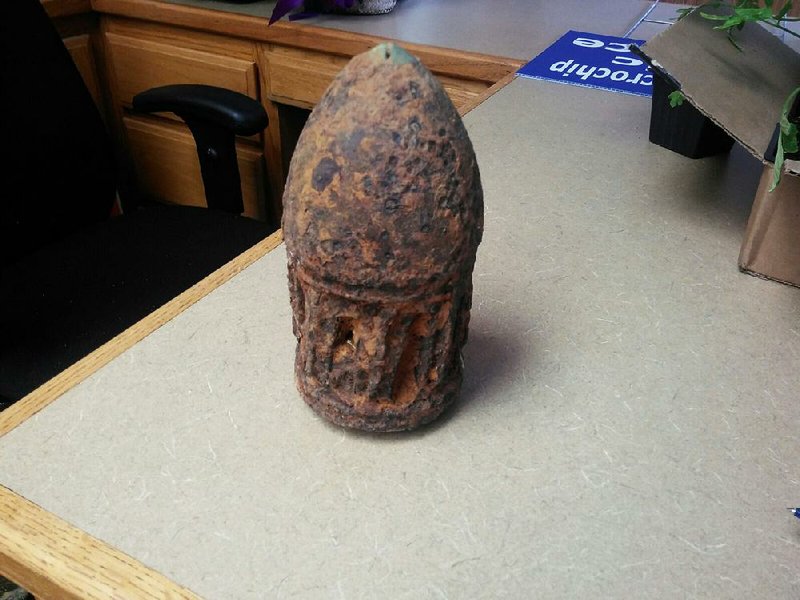 A gas-line worker unearthed this intact Civil War artillery shell in Prairie Grove earlier this month. The 14-pound shell was promptly destroyed by authorities to the chagrin of historians, who say it should have been disarmed and preserved.

PRAIRIE GROVE -- Bomb squads and historians have been at odds here over the recent discovery of a Civil War artillery shell.

The 14-pound James Rifle shell was unearthed earlier this month by a gas-line crew working along Wayne Villines Road in Prairie Grove. The unexploded shell had apparently been left by Confederate troops during the Battle of Prairie Grove on Dec. 7, 1862.

After rattling around in the back of a service truck for a couple of days, the shell was turned over to the city of Prairie Grove, which planned to donate it to Prairie Grove Battlefield State Park, said Larry Oelrich, the city's director of public works and administrative services.

But before that could happen, someone from the Bentonville Bomb Squad saw a post about the shell on Prairie Grove's Facebook page. The Facebook photo showed the shell sitting on the console in Oelrich's pickup.

The shell was confiscated early the next morning, May 13, and destroyed later that day by the U.S. military in a rock quarry near West Fork, said Mike Meadors, commander of the Bentonville Bomb Squad, which serves 17 Arkansas counties.

He said the shell appeared to be live, based on the way it reacted when blown up.

"In the interest of public safety, this round was about 150 years old and still contained explosives," said Meadors, who is also an officer in the Bentonville Police Department.

"They picked it up and had it destroyed by noon, with people at the park begging them not to," said Oelrich.

Jessee Cox, superintendent of Prairie Grove Battlefield State Park, said they didn't have time to confer with other parks about what to do.

"We could have called Gettysburg or somebody and said 'Surely y'all have run into this. What do you do?'" said Cox. "There's no 800 number to call and get those answers."

Cox said the bomb squad was determined to destroy the shell.

"They decided that thing needed to go," said Cox. "They got a sergeant in the Army involved and he pretty much ramrodded the thing. He said it's a safety hazard and needed to be destroyed ASAP."

Meadors said a U.S. military bomb squad traveled up from Little Rock to destroy the shell while members of the Bentonville Bomb Squad observed.

Alan Thompson, museum registrar at the park, said the shell should have been disarmed and preserved.

Thompson said the park has about 10 similar James Rifle shells that were donated live and later disarmed at U.S. military arsenals. Two of them are on display in the park's museum. The other eight are in storage. The shells are about 9 inches in length and 3.8 inches in diameter.

"You can go to every battlefield museum in the country and find them," said Thompson.

Thompson said he's been told that, since the terrorist attacks of Sept. 11, 2001, the military no longer disarms found shells.

But in 2004, two Marine Corps ordnance disposal experts disarmed a rare Civil War Britten shell from the Confederate raider CSS Alabama, which was sunk in 1864 off the coast of France, according to a news release from the Naval Historical Center. The shell was to be displayed in a museum, according to the release.

That was evidence that the most recent Prairie Grove shell could have been disarmed, too, said Thompson.

"Of course, we don't disagree that it had historical value," said Simpson. "The rest of the story is even though it's a Civil War item, the U.S. military maintains control over it because it's a military device. ... If the park had someone on contract to take possession of it, it might have had a different ending."

Cox said park officials are working on rules in case this happens again in the future. But those rules won't hold sway outside the park boundary, he said. The Wayne Villines Road location is within the footprint of the Battle of Prairie Grove, but it's outside the park's boundary. Oelrich said the shell was found in the city's right of way.

Meadors said he's not sure what the park's new policy will mean to the Bentonville Bomb Squad.

"I will have to talk to the powers above me, whether it's the FBI or the U.S. military, about the appropriate course of action," he said.

Thompson said the Confederates had two cannons that would fire the 14-pound James Rifle shells. They were Union-made cannons that they had captured at the Battle of Lone Jack, Mo., in August 1862. The Union Army had 10 of the same type cannons during the Battle of Prairie Grove. They were the largest-diameter shells fired during the battle, said Thompson. Thousands of James Rifle shells were fired that day in Prairie Grove. Fragments of the shells are frequently found in the Washington County city, but it's rare to recover an intact shell.

Thompson said he's heard of two or three James Rifle shells going off since the Civil War and killing someone, but those explosions happened when amateurs tried to disarm the shells by drilling into them or using some other unsafe procedure.

Bobby Braly, executive director of Historic Cane Hill, about 8 miles southwest of Prairie Grove, said it's important for historians and the military to work together to safely preserve artifacts.

Civil War artifacts are a nonrenewable resource, he said. Once they're destroyed, they're gone forever.