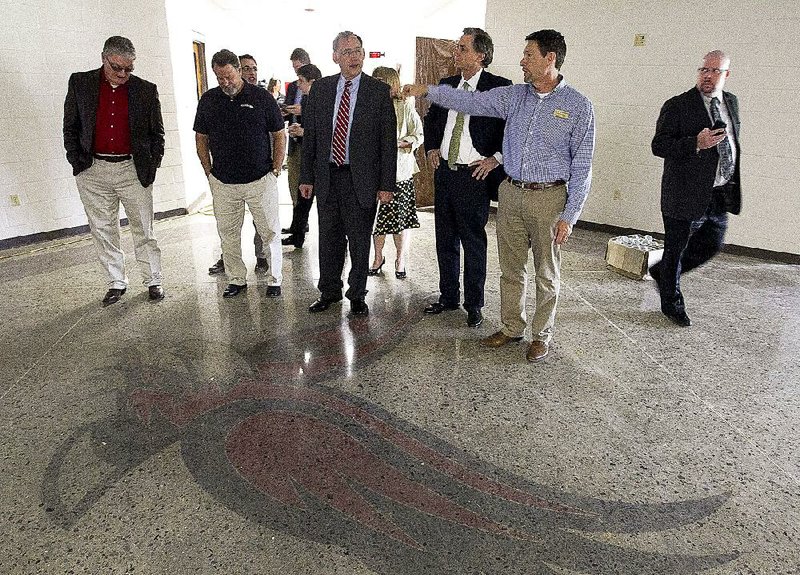 VILONIA -- U.S. Sen. John Boozman couldn't help but remember the last time he visited tornado-ravaged sites in Faulkner County. It was in June, several weeks after he had undergone emergency heart surgery.

"I think my first official" visit as senator after the surgery was to the tornado-stricken towns of Vilonia and Mayflower, the Republican senator told city and county officials gathered Wednesday at Vilonia City Hall.

"I was pretty sick," Boozman recalled of the time he spent recovering from surgery for a torn aorta, just days before the EF4 tornado struck parts of Faulkner, Pulaski and White counties on April 27, 2014.

The twister killed 16 people, 12 of whom were in Faulkner County, and wiped out entire neighborhoods.

Since then, both Boozman and the devastated towns have grown stronger.

"It's a long-term process," Jim Baker, county judge of Faulkner County, told Boozman and U.S. Rep. French Hill, a Republican whose 2nd District includes Faulkner County and who joined Boozman in Wednesday's tour aimed at checking on the area's recovery.

Firestone noted a need to protect the city's tax base.

Firestone told Boozman and Hill of Vilonia's long-term design plans for the city's comeback and mentioned the infrastructure -- streets and utilities -- needed for new development.

The project, approved by the Mayflower City Council on Tuesday, was a collaborative effort. Even high school students joined in, Holland said.

The Game and Fish Commission plans to build a new meeting facility, along with other construction.

In Vilonia, Boozman said he's working with others in Congress to get longer-term federal funding for highways and other infrastructure. Earlier this month, the House approved a two-month extension of such funding. But Boozman noted that communities need to know longer-term funding is available so they can plan major projects.

"This is not a partisan issue at all," Boozman said. "Democrats and Republicans are working on this."

Hill said later that he would like to see Congress approve a five- to seven-year funding measure.

Boozman said he was hopeful for a solution "in the next few days," but Hill said he was less optimistic.

"I have not heard a consensus about how to put together a long-term bill," Hill said.

Boozman and Hill also visited the nearly complete Vilonia Intermediate School. The roughly $13 million school on South Mount Olive Road was nearly complete in April 2014, when the tornado destroyed it. The school district started over and hopes to open the school for the next term.

After the school gets a flagpole installed, a special memorial is planned: The U.S. flag flown over the U.S. Capitol last year in honor of storm victims will be sent to Vilonia and flown there.

Superintendent David Stephens said there had been concerns that the school district's enrollment would decline because of families moving elsewhere after the tornado. But he said, "Actually, enrollment is up this year" by about 40 students.

About 700 students will attend the intermediate school this fall, Stephens said. The school district plans to build a safe room there.