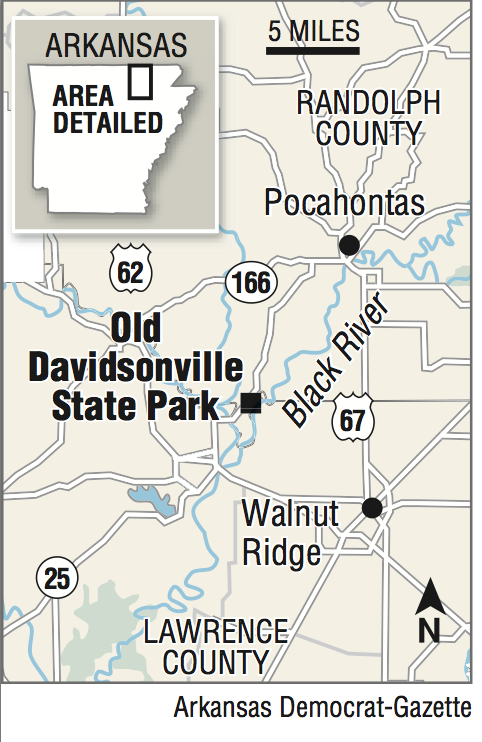 Davidsonville, a northeast Arkansas town that once featured the state's first post office and courthouse, thrived for only about 15 years in the early 1800s, but its impact on the region's development remains, historians said.

Old Davidsonville Historic State Park will recognize the 200th anniversary of the town on Nov. 14 with a series of lectures about its formation, development and influence.

The town was formed after Lawrence County, then known as the "Mother of Counties," was created on Jan. 15, 1815, from land on the southern edge of the Missouri Territory. Davidsonville was part of Lawrence County until Randolph County was established in 1835, when Lawrence County's land was broken into smaller counties.

At Lawrence County's largest size in 1815, though, the county extended from Fayetteville east to the Missouri boot heel and from the Arkansas River north into the Missouri Territory.

Davidsonville was created as the county seat, and its post office opened in 1817, said Anna Pfeiffer, park interpreter at the state park near Pocahontas.

Two years later, a two-story, brick courthouse was built, and the town began prospering. The courthouse featured handmade bricks and glass windows at a time when many businesses were built out of logs, Pfeiffer said.

The spot for the town, perched along a bend in the Black River, was chosen because of the ease of land acquisition, she said. There were disputes over ownership at some prospective locations for the town, but settlers were able to buy land from five Frenchmen who proved legal ownership, she said.

The town began growing in the early 1820s. Archaeologists estimate that at its peak, Davidsonville's population reached about 300 people.

Davidsonville also was home to a land office, which Pfeiffer said was instrumental in the town's growth.

But by 1829, the town's population began dwindling.

Steve Saunders, the museum program assistant at Powhatan Historic State Park in Lawrence County, blamed the decline on the relocation of the land office. The person who ran it never thought much of Davidsonville and finally moved the office to Batesville.

"If the office stayed in Davidsonville, I think the town would have been really big," he said. "Davidsonville was the logical spot because all expansion from Missouri southwest to Texas came through there."

He added that in 1820, Little Rock became a central hub as expansion continued into the Arkansas Territory.

"Davidsonville was the leading edge of expansion in 1815," he said. "But then, Little Rock became the center. All of a sudden, [Davidsonville] was an outpost."

For decades, rumors abounded that a plague had swept through the town, killing most of its people and causing those remaining to burn the structures.

Town records kept at the NorthEast Arkansas Regional Archives in Powhatan showed that a town physician referred to the "sick season coming up" one fall, but there are no reports of any plague, Saunders said.

Archaeologists have discovered the remains of structures in the town, and there is no evidence of widespread fire.

"There was local opposition to the location of Davidsonville since its beginning," Saunders said. "When it was founded, they knew water transportation would be important, but others felt it was isolated when the Black River flooded."

On Nov. 14, Saunders will be one of the featured lecturers at the town's 200th anniversary celebration. The event begins at 9 a.m. at the park on Arkansas 166 west of Pocahontas.

Brooks Blevins, a history professor at Missouri State University in Springfield, will discuss the diversity of early northeastern Arkansas.

George Lankford, a retired professor at Lyon College in Batesville, will talk on "Inventing Davidsonville."

Blake Perkins, an assistant professor of history at Williams Baptist College in Walnut Ridge, will speak on "The Women Who Made Lawrence County."

Pfeiffer said the event is free and open to anyone who wants to attend. There is a $5 cost for lunch, if participants want to eat food provided by the park.

Six professional development hours will be awarded to teachers who attend, she said.

Print Headline: 1815 city got off to fine start