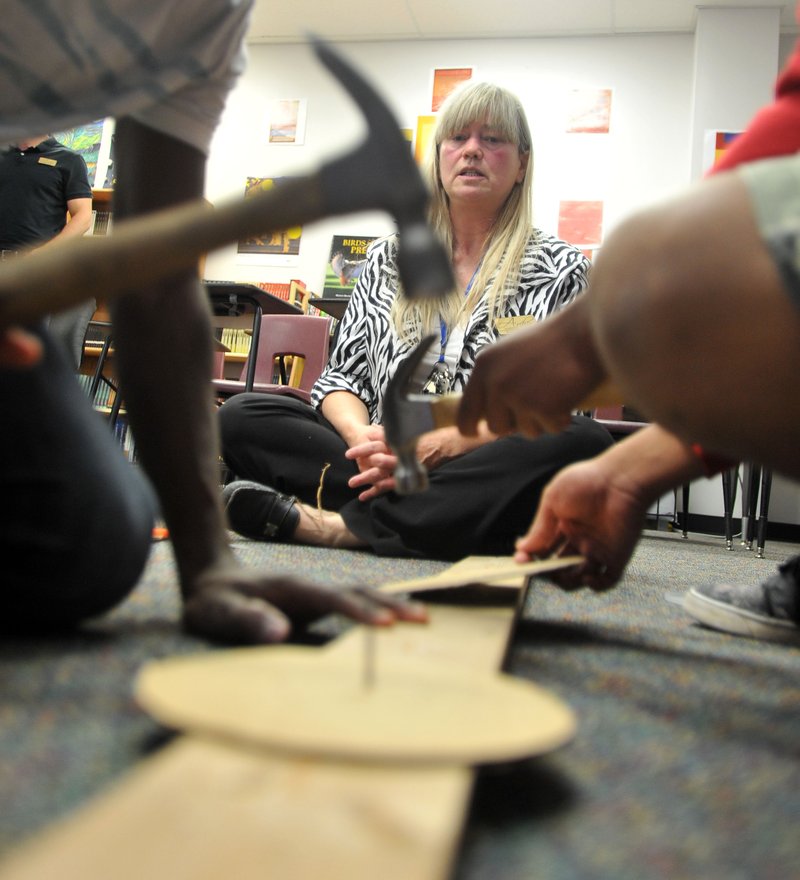 David Stephen, 17, is deciding whether to return to Springdale High School or graduate early. He recently took the ACT exam, wants to attend college and is interested in writing fiction.

A behavior system places students attending the Positive Upward Success Here program in lieu of expulsion at one of four levels. Students lose points for misbehaving and gain points for meeting expectations. This is a sampling of the responsibilities and privileges for each level.

Level I: Students participate in class most of the time, finish most of their assignments, begin developing strategies for behavior, respect everyone, raise their hands to leave their seats and do not sleep in class. Privileges are listening to class music and reading.

Level II: Students participate, use time appropriately after completing classwork and develop strategies for behavior. Privileges include a library pass, a bathroom pass, bringing appropriate music to class, getting out of their seat without permission and biweekly free time.

Level III: Students finish all classwork, use time responsibly when classwork is complete, are role models for behavior and maintain positive behavior. Privileges include use of a hand-held music player, additional free time, lunch twice a week with peers, choice of class novel, Chill Zone time and potential movie party or gaming experiences.

Chris Massey, 18, wants to go to the University of Arkansas and pursue a career as a stylist or fashion designer, he said.

They each made decisions that could have led to an expulsion, but instead they were able to continue their education because of a new program, Positive Upward Success Here, at the Archer Learning Center in Springdale.

Massey sat in Brandon Flammang's classroom last month with a laptop computer while working on an online Algebra III assignment. He likes working at his own pace. Flammang is working to get a sewing machine to help Massey begin learning.

"To me, it's helped me a lot from the past mistakes I've made," Massey, a senior, said of the new program. "It's put me on a path to graduate and be a successful young black man."

Massey was in high school in Oregon when he made some mistakes, he said.

"I wasn't thinking," he said. "I'll be thinking every time now."

"Without it, we would be turning 50 to 60 kids in the region out on the streets each year," said Robert Moore, assistant superintendent for secondary curriculum and instruction in Rogers. "In REAP, they can continue to earn credits, and it keeps hope alive for those kids."

Springdale created the Positive Upward Success Here program within its alternative school this year. The program has space for up to 30 students and is designed for those who weren't succeeding in the alternative learning school and for students in lieu of expulsion, said Principal Shawna Lyons.

"I'm very passionate about personalizing each student's learning," Lyons said. "It's just one more path to individualize for students."

The new program started with 18 students who are divided into two classrooms, Lyons said. The program operates in a structured environment, so that bathroom breaks for a class occur at the same time. Students are assigned a level on a behavior system, earn points that lead to privileges and lose points and privileges for misbehaving, including purposeful use of profanity, throwing small objects, inappropriate jokes or failing to complete assignments.

Students at Level I have to raise their hands before leaving their seats and have the least number of privileges. Level III students are granted time in the campus "Chill Zone," a room with coffee makers, an air hockey table, pool table, ping pong table and video games.

Students who reach Level IV are eligible to exit the program, Lyons said. Banks and Stephen reached Level IV and recently began transitioning into other classes at Archer. The hope is they continue to be successful before transitioning to their home campuses. Students also have the option of remaining at Archer.

The staff has the option of convening "restorative circles," which are adapted from a criminal justice theory emphasizing repairing harm, Lyons said. Restorative practices focus on building community.

Circles bring together students, teachers and parents together to work through issues, such as abuse, neglect, abandonment and death, Lyons said. The circles provide a supportive means for students to identify the root cause of their behavior.

An early introduction to circles is through a "welcome circle," said Alonzo Terrell, a behavior teacher. Students who are entering Positive Upward Success Here receive a gift. The meeting includes serious conversations, with all participants in the circle answering questions, such as describing a time they caused harm, when they were harmed and what was necessary to heal, he said.

"The person recognizes, 'I need everything everyone else needs,'" Terrell said. "We can ask what they specifically need. We develop goals and a plan to reach those goals."

An increasing number of schools across the country recognize they can do more for students who misbehave than suspend or expel them, said Kelly Vaillancourt Strobach, a school psychologist who is director of government relations for the National Association of School Psychologists.

It's a shift from the 1990s when zero-tolerance policies became widespread, Strobach said. The policies initially were intended as swift consequences for students who brought firearms to school, but resulted in excluding students from school for behavior that didn't warrant a suspension or expulsion, she said.

Students who are expelled have ample free time with no adult supervision, putting them at greater risk of not finishing school and committing crime, Strobach said.

Many schools have implemented programs to teach students about expectations for behavior and to reward good behavior, Strobach said. Other schools have adopted more extensive programs that support students in understanding their behavior, admitting their mistakes and working to change.

"There is genuine benefit to doing everything possible to provide kids with the skills they need to be successful," Strobach said.

Decisions about placing a student in the Positive Upward Success Here program are made on a case-by-case basis by a committee, Lyons said. The committee, with representatives from their home campus, Archer, parents and the student, discusses prior interventions for the student and if the program is the best choice.

Stephen, a senior, considers himself an introvert who likes to talk. He has written four chapters of a novel.

Stephen said having an alternative to expulsion was helpful. He exited the Positive Upward Success Here program last week.

"I really wanted to graduate and not repeat," he said. "The teachers are nice here. There's a lot of opportunities here."

Starting at a Level I in the behavior system provided Stephen with lots of time to think. He was able to focus on finishing his work.

His main complaint is the way friends react when they find out he is a student at Archer. He wishes his friends and others in the community would treat Archer students objectively and with forgiveness.

Most of the students at Archer want to graduate, Stephen said. Sometimes they have struggled at the bigger campuses because they didn't get along with some cliques.

Banks, a junior, likes to be funny, creative and joyful. She enjoys playing basketball, texting on her phone and eating, she said. She's also recently transitioned out of the Positive Upward Success Here program.

Banks has dreams of playing professional basketball or becoming a lawyer, she said. She hopes to return to Springdale High School next school year and participate in sports.

At Archer, she appreciates receiving more feedback than a letter grade from her teachers, she said. One of her teachers made specific comments about her use of description in writing.

"It makes me feel good," she said. "Someone recognizes my work and pushes me to do more."

Most of the time Banks is in a good mood, but teachers at Archer have helped her cope when she feels angry, she said. They tell her to let them know if she's having a bad day. They give her space to cool down when necessary.

"It makes me feel comfortable," she said.

Now that Banks has been apart from her friends, she has learned she doesn't have to follow along when they pressure her to make a poor choice.

"I can do this on my own," Banks said. "I've been doing my work, paying attention. I have no distractions."