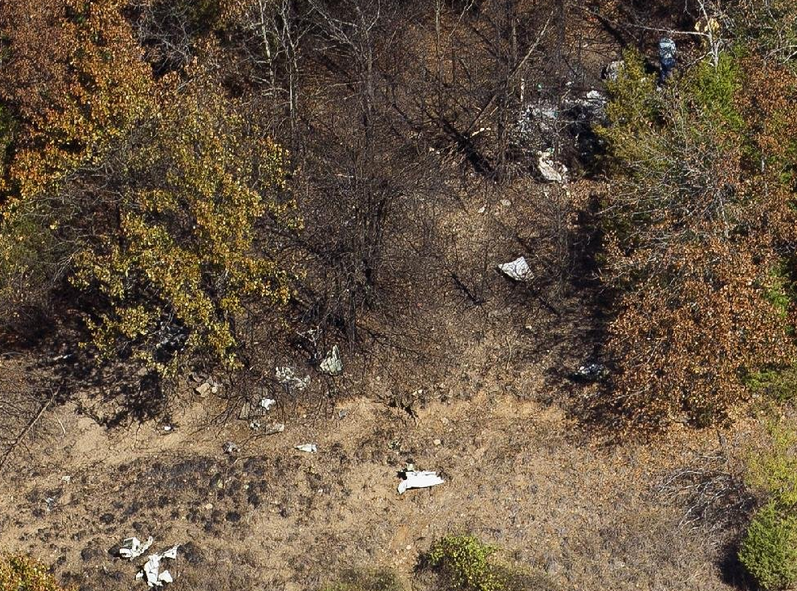 Airplane lands by parachute in Fayetteville 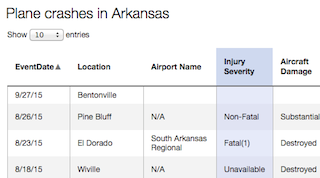 Authorities had delayed until Tuesday releasing the names of the victims, who were severely burned in the crash, so that the state medical examiner's office could confirm their identities through DNA testing.

The medical examiner's office identified the dead as Philip Cowger, 65, of Dardanelle; and Robert Harris, 48, of Russellville, Wesley Harris, 43, of Pottsville and Julie Harris Lefevre, 41, of Dover, according to the Pope County sheriff's office and their obituaries.

Cowger was flying the Harris family siblings to Knoxville, Tenn., in a single-engine Beechcraft Bonanza so they could attend the funeral for an uncle, Edward Harris, who died Monday and was buried Thursday, the same day as the plane crash.

The couple "lost all of [their] children," White said.

The coroner said the medical examiner's office should know by week's end whether the crash or the resulting fire killed those aboard the plane. He had not received any information from the National Transportation Safety Board but said the crash was being investigated as an accident.

Safety board investigators left earlier this week after examining plane wreckage and other evidence. The safety board could issue a preliminary report this week or next.

White said he did not know whether investigators found any cellphones or GPS systems that might help in the investigation.

The safety board did not immediately return a phone message seeking comment Tuesday.

The manager of the Russellville Regional Airport, from which the plane took off, and the coroner said the pilot was "very experienced."

"He had flown this plane ... many hours" and knew the Harris family, White said.

A funeral home obituary for Cowger said he graduated from Henderson State University with a degree in business. The River Valley Pilot Association was listed among the honorary pallbearers at his funeral.

"But they were still working there during the transition," White said.

Robert Harris was general manager of Valley Motors for 20 years, according to his obituary. Known to his grandchildren as "Daddy Bob," he enjoyed hunting, riding his Harley-Davidson motorcycle, cooking, flying and spending time with his family, his obituary said.

Wesley Harris, called Wes, was a parts manager at Valley Motors for 20 years. He enjoyed the arts, playing the drums, studying geology, being outdoors and being with his family, said his obituary in the Courier News, Russellville's daily newspaper.

Lefevre had been married to Kile Lefevre since July 23, 2014. She worked as an Internet manager at Valley Motors for six years. She loved to fish, ride four-wheelers, shoot guns and be outdoors, but her children and husband were "her greatest satisfactions," her obituary said.