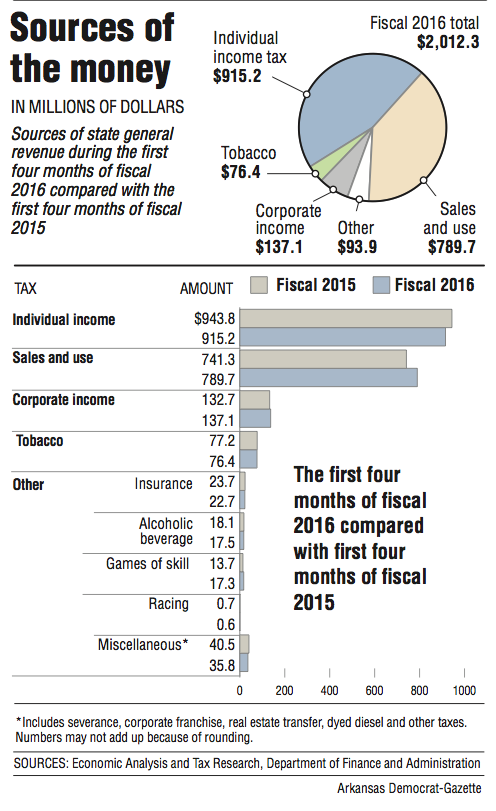 Fueled by better-than- expected individual income and sales and use tax collections, state general revenue in October totaled a record $490.4 million, an $11.8 million increase over what was taken in during the same month last year.

State forecasters had predicted revenue would be less than what was collected in October 2014, but last month's general revenue collections exceeded the state's forecast by $25.9 million, the state Department of Finance and Administration said Tuesday in its monthly revenue report.

October's collections are a record for the month, said department tax analyst Whitney McLaughlin. The previous record for October was the $478.6 million collected in October 2014, she said.

Republican Gov. Asa Hutchinson said that "October was the seventh consecutive month we saw an increase in our state's sales tax, which is a good indicator of consumer confidence and economic growth.

"This is a reassuring sign for Arkansans that our economy continues to move in the right direction," Hutchinson said in a written statement.

Individual income tax collections were better than expected in October largely as a result of payments by taxpayers who had received a six-month extension in April to file their returns, said finance department Director Larry Walther.

"[The increased] consumption correlates with job growth and especially job growth in the higher-income categories of the economy, the core sectors," said John Shelnutt, the state's chief economic forecaster.

These sectors include construction; professional and business services; education and health; and finance; and they tend to be associated with more full-time jobs than the retail and food service sectors, Shelnutt said.

The national unemployment rate was 5.1 percent in September.

"We have a $50 million [income] tax reduction that started in January, so you would expect it to be down a little," said Walther.

State tax refunds and several other government expenditures come off the top of total general revenue, leaving "net" general revenue that agencies are allowed to spend.

Withholdings are the largest category of individual income tax collections. They declined by $7.3 million over a year ago to $183.8 million, but exceeded the state's forecast by $5.8 million.

Individual income tax collections from returns and extensions increased by $10.7 million over a year ago to $42.9 million, exceeding the state's forecast by $12.3 million.

Walther said individual income tax filers are allowed to seek a six-month extension from the April 15 deadline to file their returns and "when they actually filed in October, there was taxes due and that in part was the reason why were up $18.5 million [over the forecast] in October."

"The results reflected continued growth in underlying economic indicators for consumption," the department said in its written report.