Little Rock man is guilty of killing girl, 15, after prank 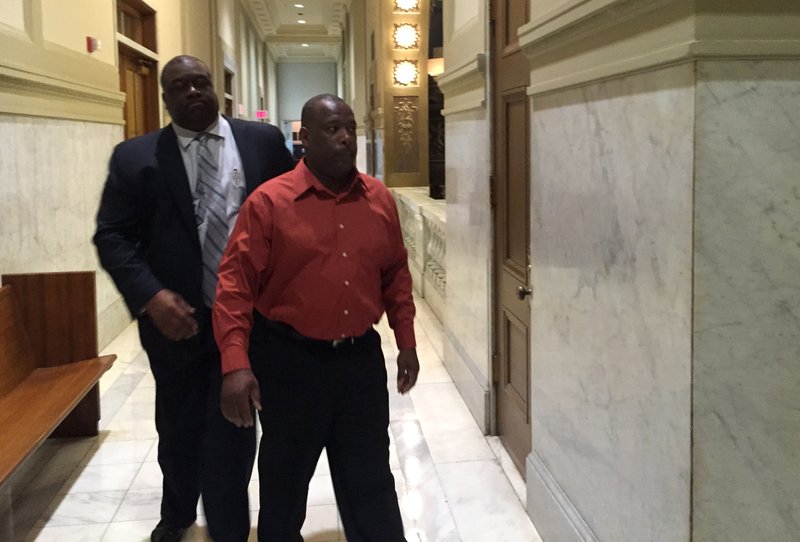 A 50-year-old Little Rock man who fired into a car full of teenagers, most of them friends of his son, was sentenced to 30 years in prison Wednesday for killing a 15-year-old girl.

Willie James Noble will have to serve 21 years before he can qualify for parole. The minimum sentence was 10 years, and the jury could have imposed a life sentence.

The eight women and four men deliberated about 70 minutes to convict Noble on all charges -- first-degree murder and six counts of committing a terroristic act -- with each charge representing one of the children in the car with 15-year-old Adrian Broadway on Valentine's Day 2014, the night she was killed.

The teenagers had been trying to pull a prank on Noble's son, Davian "Bubby" Noble, who was 16 at the time.

A group of five made the first attempt, but they didn't think that first try, putting toilet paper and tree leaves on his car, was very good. So, joined by two other teenagers, a carload of seven made a second effort, armed with eggs and a squeeze bottle of Miracle Whip, according to testimony.

Broadway was shot in the head just as she and another girl, Derrika Garrett, were getting back into the car. Broadway had thrown some eggs -- poorly, her friends said -- at the neighboring home of another boy while Garrett had flung the dressing on the back of the younger Noble's car in front of the Skylark Drive home.

Davian Noble slept through the subsequent shooting. The teens had targeted his car to pay him back for "egging" someone else's, according to testimony. They have stayed friendly with the younger Noble since the shooting.

The bullet hit Broadway at the hairline close to the center of her forehead and came out of the back of her skull, the state's chief medical examiner testified on Wednesday. The wound was so devastating that Broadway likely never even knew what hit her, Dr. Charles Kokes told jurors. She died about 21/2 hours later, after being kept on life support for her organs to be donated.

Noble did not take the stand at his two-day trial, but prosecutors John Johnson and Melanie Martin played a 22-minute interview he gave to detective Brad Silas that same night but before he was told he'd killed someone.

Noble said he discovered his son's car with the leaves and toilet paper around it so he got his gun, a 9mm semi-automatic Hi-Point, loaded it and waited for the vandals to return. A "gut feeling" told him they'd be back, he said, telling the detective he was "pissed."

When he heard the vandals outside his home again, he said he went out and opened fire, saying he saw one person -- whose sex he could not determine -- get out of a white car and run toward his driveway. He said he started shooting and the figure got back into the car, which drove off. Noble said he didn't know whether he'd hit anything, saying his only intention was to scare whomever it was, an assertion he repeated seven times on the recording.

"I come out the front door and I just started shooting. I didn't know if I hit nobody or nothing," Noble said. "I wasn't aiming at nobody. I was just shooting. I was trying to scare whoever it was. I wouldn't try to hit nobody because I ain't trying to take nobody's life."

In closing arguments, Johnson, the chief deputy prosecutor, scoffed at Noble's assertion he was not shooting at the teenagers' car. Johnson asked jurors to look at the pattern of the three bullet holes in the vehicle and the shattered drivers window -- at least four shots hitting the car proves that Noble was aiming at it.

"At the worst, it [the pranks] should have ended up with a phone call to someone's parents," Johnson told jurors. "If he'd been trying to scare them ... and they're driving away, mission accomplished. The bullet goes where the gun is aimed. He didn't care what happened. He didn't care who he killed."

Defense attorney Ron Davis also asked jurors to look at the bullet holes, but told them they needed to start with the two in Noble's front yard. They show that his client, an inexperienced shooter firing with one hand, had lost control of his weapon, with the recoil from the shots forcing Noble's gun hand higher and higher as he pulled the trigger, Davis said.

"He was honest ... about what happened that night," Davis said. "There wasn't any aiming at the vehicle. He was wrong to do it. There's no credible evidence that he took aim at the car."

At sentencing, Broadway's mother, JoLaunte Hartgro, told jurors that what has been taken from her and her three surviving children can never be replaced. She recalled seeing her daughter on a ventilator, describing for jurors how she tried to rouse her. Doctors had told her the girl would not survive.

"I tried to tickle her feet because she didn't like that. I got no response," she said. "I kissed her. I told her to fight, fight."

Pamela Noble said her husband made a terrible mistake that needed to be punished, but asked them not to impose a lengthy sentence on the good man she had been with since middle school, a law-abiding husband and loving father.

Jurors delivered a $1,000 fine and a three-year prison term on each of the six terroristic act charges, but special Circuit Judge Ernest Sanders agreed to a defense request to run those sentences concurrently to the murder sentence.

Davis, the defense attorney, asked the judge to consider the nature of the charges, which did not require prosecutors prove that Noble had deliberately tried to hurt the teens. Prosecutors had to show that Noble was attempting to damage the teens' car when he killed the girl.

The tearful testimony of Noble's wife immediately after Broadway's mother's emotional address to jurors brought the defendant to tears, with several of the jurors crying, as well.

Noble tearfully apologized to the dead girl's family and the other victims, saying he had always wanted to say he was sorry from "day one," but had been told not to have contact with them.