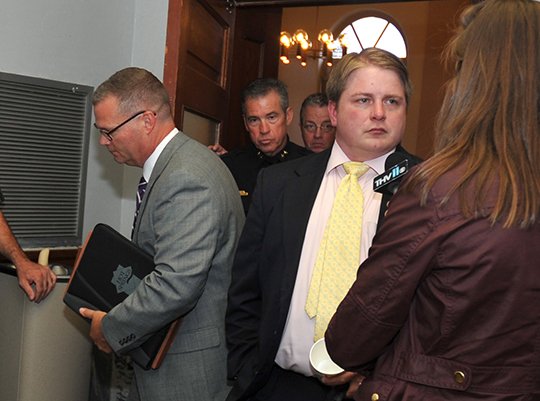 DAY IN COURT: Matt Campbell, second from right, talks to a TV reporter Wednesday at the Garland County Courthouse following a hearing on the denial of his Arkansas Freedom of Information Act request for recordings of 911 calls made following the death of Circuit Judge Wade Naramore's son. City Attorney Brian Albright, left, represented Chief of Police David Flory, second from left, in the suit. ( The Sentinel-Record / Mara Kuhn)

A judge ordered the release Thursday of 911 recordings in the July death of a Garland County circuit judge's 17-month-old son, saying the calls are not exempt under the state's Freedom of Information Act.

The Police Department refused Campbell's Oct. 20 Freedom of Information Act request for the recordings, saying the calls were part of an ongoing criminal investigation and therefore exempt from disclosure.

In Thursday's ruling, Sam Bird -- a retired Arkansas Court of Appeals judge who had been assigned to the case by Supreme Court Justice Paul Danielson -- disagreed.

"The recordings reveal nothing more than a report by a father of a child that the child had been left in a car, and that he thought the child was dead," Bird said in the order.

The Hot Springs Police Department also offered no explanation of why the information on the recordings was investigatory in nature or "how that information outweighs the heavy presumption of the public's rights to this admittedly public information under the AFOIA," Bird wrote in the ruling, using the initials for the Arkansas Freedom of Information Act.

"The Court is convinced that there is no case of the Arkansas Supreme Court that protects these 911 tapes from disclosure to the public under the 'undisclosed investigation' exception to the AFOIA," Bird wrote.

Flory said that in declining to release the recordings, he was following the direction of 2nd Judicial Circuit Prosecuting Attorney Scott Ellington, who was assigned in August as a special prosecutor to investigate the death.

"I was the one that got sued and caught the heat," Flory said. "But I respect the judge's decision and will follow through with the ruling."

Bird gave the Police Department until noon Monday to release the recordings to Campbell.

However, recordings of the two calls -- the first from Naramore and the second from his father-in-law, Chuck Wright -- were released Thursday to the Arkansas Democrat-Gazette within three hours after a Freedom of Information Act request was sent.

Messages left for Campbell were not returned as of late Thursday.

No criminal charges have been filed in the death of the child as of Thursday, but the investigation is ongoing, Ellington said.

"We're waiting on some information that just has not gotten to us yet. There are a whole lot of moving parts to this," Ellington said.

Now that the recordings are released, the public may have a different view of the case, Ellington said.

"It's a difficult situation. There will still be some cynical people out there, but I would think that the public ...," Ellington said, his voice trailing off.

The first call came from a distraught Naramore about 3:09 p.m. on July 24 after he discovered his son, Thomas, in the back seat of the vehicle.

The 911 call was initially routed to a Garland County emergency operator because of the "ping" from Naramore's cellphone, then, later in the call, was rerouted to Hot Springs' 911 center, Hot Springs police spokesman Cpl. Kirk Zaner said Thursday.

When the county 911 operator answers the call, Naramore can be heard breathing heavily and sobbing loudly.

"I need a ... I need somebody to contact me immediately. My son's in the car and, and I, and I ... He stayed back there," Naramore says shakily.

The operator interrupts: "Listen to me. Where are you located?"

Naramore's sobbing stops, and he says in a deliberate manner, catching his breath between words, "I am at the intersection of James and Fair Oaks, please," then, "Please send somebody!"

The county 911 operator interrupts him to ask for confirmation of the location at James Street and Fair Oaks Place.

The emergency operator then asks Naramore what is wrong with his son.

"It's too late! I think he's dead," Naramore screams, then sobs loudly.

The county operator then asks Naramore to hold while she transfers him to the Hot Springs 911 dispatch center. Naramore can be heard sobbing, breathing heavily and crying out "No!" repeatedly.

"Please get someone here immediately! I'm at the intersection of James and Fair Oaks. My son was left in the car, and I think he's ... I think he's dead," Naramore cries out, now speaking to a city emergency operator.

The woman asks for verification of the location, which Naramore provides and then screams, "Yes! Please God!"

"OK. We'll get LifeNet on the line. Don't hang up," the city operator says.

Bird wrote in the ruling that Naramore "gave the 911 operator an address, then apparently hung up to call his wife." That development is reflected in the following exchange:

"OK. We've got somebody headed there now. We just got a call for it, so somebody's on ..." the male operator says.

"Thank you. Thank you," Naramore screams.

"Stay on the line with me though, OK?" the operator says.

The operator again asks for confirmation of the address.

The operator then repeated "James and Fair Oaks" to someone else in the room.

"OK," the operator responds to Naramore. The operator begins speaking to someone else in the room.

A female operator then gets on the line and asks, "Sir, what kind of vehicle are you in?"

Naramore does not respond.

"Sir?" the woman asks, then says. "I guess he disconnected."

Within minutes, another 911 call was received from Wright -- Naramore's father-in-law -- who gives the same location of the emergency.

"OK. My wife just called my son-in-law, Judge Naramore. He called quick and said, 'We need an ambulance right away.' I don't know if it's their baby or what. And we're on our way," Wright said.

The 911 operator begins asking him numerous questions, as if Wright is at the scene: "Is he awake?" "Does he appear to be completely awake?" "Did you ever hear him talk or cry?"

"I do not know," Wright answers, frustratingly. "It was my son-in-law [who] made the call. Please get an ambulance here!"

The call continues with the operator asking more questions of Wright.

Zaner, the police spokesman, said the first responders arrived at Naramore's home about 3:13 p.m. that day.

A preliminary report from the state Crime Laboratory said Thomas Naramore died from "excessive heat" after being left unattended in the hot car for an unknown amount of time. The official autopsy is complete, but Ellington has not released the report.

The high temperature in Hot Springs on July 24 was 101 degrees shortly before 5 p.m., according to National Weather Service records.

"It's not an easy situation. It's a tragedy all around," Ellington said.

"On the other hand, I've been tasked with the job, and I've got to handle it to the end."

Naramore has been on a leave of absence from Division 2 of the four-division 18th Judicial Circuit-East encompassing Garland County since the death of his son on July 24.

Special judges have presided over Naramore's court since late September.