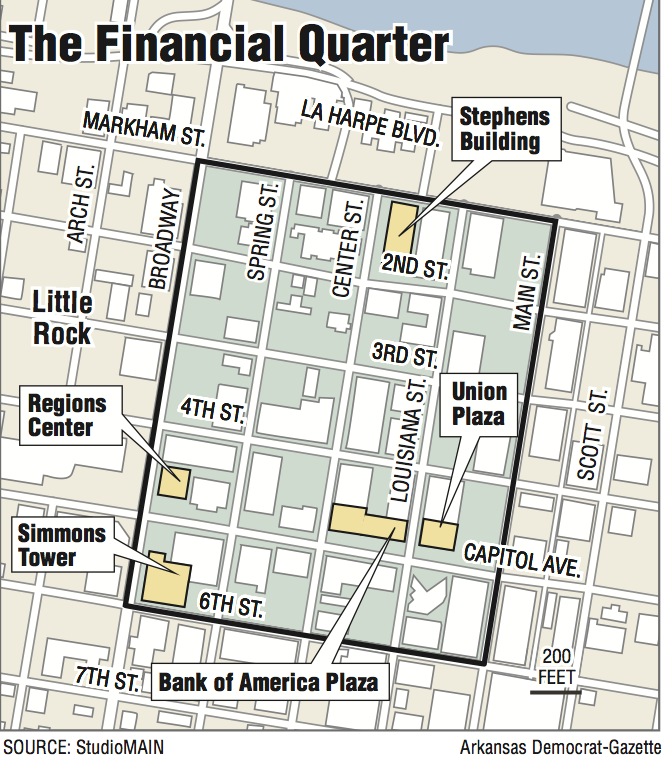 A map showing the Financial Quarter in Little Rock.

An all-volunteer group of design professionals known as studioMAIN has been working for months on visual enhancements large and small that would make downtown Little Rock's financial center more of a destination by day and increasingly so after dark. StudioMAIN recently presented its ideas to Financial Quarter businessmen and other stakeholders at a meeting at studioMAIN's office on South Main Street.

Another 1,000 hotel rooms in or adjacent to the Financial Quarter feed additional visitors to the area.

The quarter is bordered by the Arkansas River on the north, Sixth Street on the south, Broadway to the west and Main Street on the east -- a significant chunk of downtown. StudioMAIN professionals said in their recent report that Capitol Avenue's intersections with Broadway, Center Street and Main Street should be spruced up to help organize and brand the Financial District.

The formation of the Financial Quarter committee in spring 2014 was funded $7,500 with Regions Center, Simmons Tower and Union Plaza contributing $2,500 each. The pot is managed by the Little Rock Downtown Partnership.

While Financial Quarter members contemplate ideas for funding these enhancements and gaining approval from the city, they've taken steps toward picking a logo for the area -- an identifying marker that could be painted on the street and used on banners throughout the area. Gwen Canfield of Creative Instinct presented six different logos and the Financial Quarter group voted on their three favorites. The finalists are posted on the Creative Instinct Facebook page for public view and voting.

"Graphics are a way to help people wrap their minds around how the quarter could be branded visually," Canfield said.

"We can talk about ideas, but at some point, when it comes to implementing the ideas, there are legal issues and money issues and street and city issues that will need to be addressed," Woodruff said.

"This is certainly the right group to take all of that on, and this is how the River Market started," he added.

StudioMAIN suggests enhancements to the Financial Quarter in three phases. The first phase would include a pop-up event that would include, but not be limited to, food and food trucks, music on the plazas and portions of the existing street right-of-ways, altering the existing street furniture, painting crosswalks, hanging banners, painting and wrapping trees and landscaping where needed.

The group also recommended making use of pop-up retail kiosks and pavilions that serve as public art, as well as shelter for merchants and musicians.

An event is "definitely a key next step," Woodruff said.

"The quarter group really needs to define this," he said. "They've been talking about food, entertainment and/or a retail-type event but have not really put hard ideas down. I think this will be the focus on meetings from this time forward. I think they are now talking early spring, but it could be a holiday event. " The next meeting is set for Nov. 17 with finalized copies of the plan presented at that time.

Phase 2 presents more permanent changes: redesigning the plazas and bank lobbies, as well as creating a consistent look for street furniture -- everything from seating and way-finding signs to trash receptacles and lights.

Moses Tucker Real Estate took the first tangible step with more than $800,000 in improvements to the Regions Center. Moses Tucker manages Regions Center for owner NNN 400 Capitol Center, a group of more than 30 individual investors. The owner-funded project included renovation of the first- and second-floor lobbies, modernizing it with all new materials and lighting.

The final phase, as presented by studioMAIN, suggests the guidelines for how the rest of the quarter will be built out. Ideas include parking decks with retail and housing, street designs for Center Street as it connects the Governor's Mansion to the Old State House and high-rise housing as a means of infill development.

The plans could be incorporated into the much-discussed need for a comprehensive master plan for the area.

"If that's what comes out of this -- a real viable effort to create a master plan for downtown Little Rock so that we don't have to react to things like Interstate 30 slamming through downtown -- that would be a really good outcome," Woodruff said.

Martin explained the underlying need for distinct identifiers for the quarter.

"What really began this conversation is how to bring activity back to the street level of the old financial core, and that's evolved into a discussion about addressing streetscapes, the old bank lobbies, the connectors from as far [away] as the Governor's Mansion, all the way down to the river, but really back to the River Market and Main Street," Martin said.

"I'm pretty excited about what this could potentially be for our community," he said. "I think it could be significant."