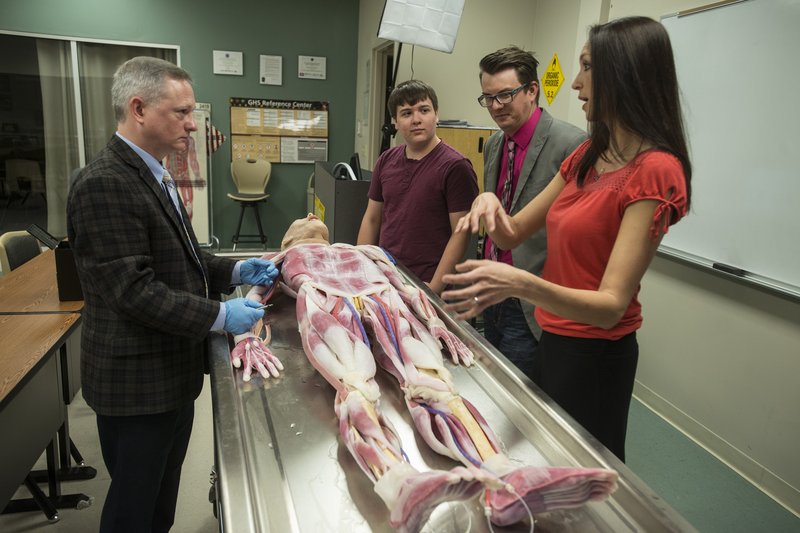 Brad Sheppard, (from left) funeral science instructor for Arkansas State University-Mountain Home, talks Tuesday with Blake Farmer of Siloam Springs, Bryan Wood of Berryville and Elise Pennington of Bentonville at Northwest Arkansas Community College in Bentonville. The class at NWACC often uses a synthetic cadaver to help teach the ins and outs of embalming. The National Funeral Directors Association reports women accounted for 16.5 percent of its members last year, up from 9.7 percent in 2004. ( Anthony Reyes)

Elise Pennington spent 19 years caring for people as a nurse. Now she is part of the growing number of women working their way into the funeral business. 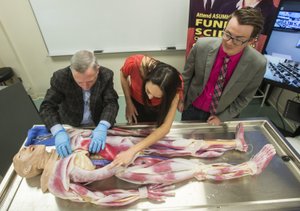 Photo by Anthony Reyes
Brad Sheppard, (from left) shows Elise Pennington and Bryan Wood the inside of a synthetic cadaver at the Northwest Arkansas Community College in Bentonville. Funeral science programs are seeing more older students of both sexes looking to change careers and enter the industry for the first time, said Sheppard, an instructor for Arkansas State University-Mountain Home.

"This is where I am supposed to be," said the 38-year-old Bentonville woman. She is a funeral science student, learning how to be a funeral director and embalmer. "This is my calling, and I've never felt more at peace."

Below are national median annual wages as of May 2012

Funeral science programs are seeing more older students of both sexes looking to change careers and enter the industry for the first time, said Bradley Sheppard, an instructor in the program for Arkansas State University at Mountain Home.

The students will help fill openings left by aging funeral home owners who lack family members to take over the business, he said.

Some funeral home owners are finding opportunities to sell with the slow and steady growth in corporate ownership.

The National Funeral Directors Association reports women accounted for 16.5 percent of its members last year, up from 9.7 percent in 2004. The organization represents more than 10,000 funeral homes worldwide and 48 percent of U.S. facilities.

Men made up 90 percent of funeral home workers as recently as 1975.

Female students surpassed their male counterparts in 2010. Matt Buel, director of the university's program, said 75 percent of his students are female. The program has 60 students at its five sites in Mountain Home, Bentonville, Jonesboro, Beebe and Ozark. Half the students attend classes in Mountain Home; four attend at Northwest Arkansas Community College.

Classes started in Bentonville in January 2013. Students meet on Tuesdays and Thursdays, and technology allows lessons taught at one site to be broadcast to all students. Cameras allow instructors and students to interact as if they are at one site.

Pennington is working toward her associate's degree and said she always felt a calling to the funeral industry. She wants to help people in a new way.

"It's an amazing ministry opportunity to reach out to people on what may be the worst day of their lives," she said.

Buel said the program has a 92 to 100 percent placement rate for students willing to move within a 120-mile radius to get a job. The need for workers will continue to increase because a majority of funeral directors are older than 65.

The American Board of Funeral Service Education reports more jobs are available than there are licensed funeral directors to fill them. The Bureau of Labor Statistics predicts the industry will grow 12 percent through 2022.

Salaries run about 10 percent higher than teachers' salaries, he added. The federal agency shows the national median pay was $51,600 in 2012, ranging from $28,100 to $94,860. Most funeral service workers are employed full time, are often on call and work long hours, including evenings and weekends, according to the agency.

Bryan Wood, 33, is working toward funeral director certification partly because of the job security. He said he has worked in construction, which hasn't provided consistent employment.

"This is just something that has always fascinated me," he said.

Changes in employees reflect who is running the industry.

Joshua Slocum, executive director of the nonprofit Funeral Consumers Alliance, said corporate ownership can remove some of the home's connection to the community, and it tends to be more costly than privately owned sites. He said publicly traded companies can save money by streamlining many administrative services, but those savings usually go to shareholders.

Officials from Service Corporation declined to comment, but the company said in its annual report that it will "continue to pursue strategic acquisitions and to build new funeral homes in areas that provide us with the potential for scale and areas with the highest return customer categories and market traits."

Buel said corporate buyouts can be a good option for some owners.

"As we move away from family funeral homes to corporate owned, we are more likely to see an increase in retirement," he said.

Holland said he knew previous owner John Beard for many years, and he jumped when the opportunity arose to buy the funeral home.

"I always thought it was a service where you could really be a help to people. The nursing home business was somewhat like that too," he said.

Running the family business happened naturally for Jeff Spivey, co-owner and funeral director at Sisco Funeral Home in Pea Ridge. His grandfather bought the funeral home in 1958, and Spivey entered the business in 1993. His father purchased the business in 1989 and died that same year. His mother took over.

"She needed help," he said. "I had not planned on going into the business, but 22 years later I'm not doing anything else."