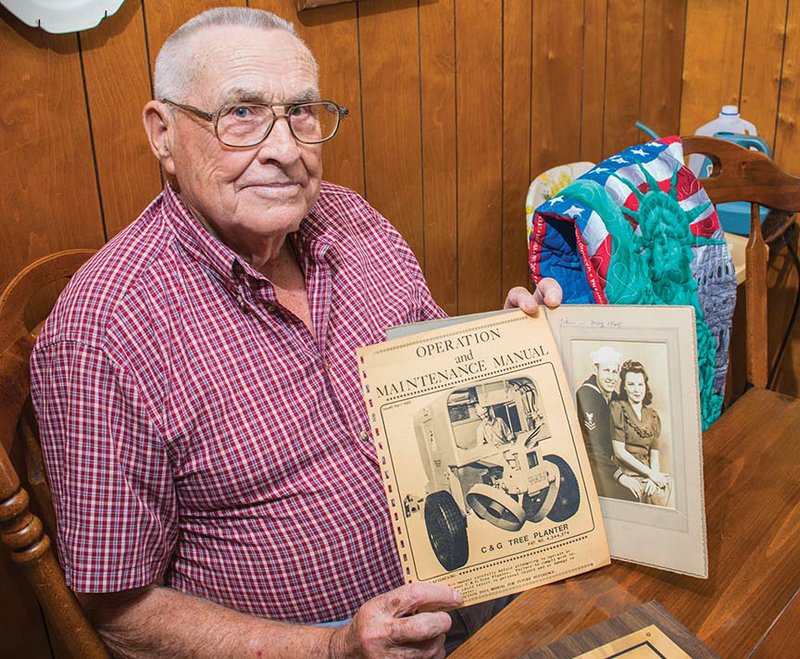 Wayne Charton of Morrilton served in the U.S. Navy during World War II. He enlisted Dec. 7, 1942, and was discharged Nov. 2, 1945. He married his wife, Irene, on April 11, 1944, while he was home on leave. He is shown here holding a photograph of the couple, as well as a page from the instruction manual for the C&G Tree Planter, which he invented in the early 1980s.

MORRILTON — Wayne Charton enlisted in the U.S. Navy in the fall of 1942.

“I was sworn in on Dec. 7, 1942,” he said, noting that was “one year exactly” after the Japanese bombed Pearl Harbor and thrust the United States directly into World War II.

“I never regretted it,” he said from his home in the Bald Knob community near Morrilton.

“I wouldn’t have done it if I hadn’t wanted to.”

In fact, he was hoping to get to Pearl Harbor in the fall of 1942 for an underwater welding job.

Charton, who turned 92 on Oct. 15, quit school after the seventh grade to find work to help out his family. When he was 15, he went to California to work in the fruit and wine vineyards.

“I worked there about a year and came home to pay off the mortgage on my dad and mother’s farm that had been hanging for years,” he said.

Charton was the second youngest of nine children born to Gus and Lily Charton of the Overcup community. His siblings included Robert, Louie, Clifton, Emmitt, Clemmie, Marie, Charlie and Julian.

“I’m the only one left,” Charton said.

Charton’s next job took him to Maumelle in 1941 to help build an ordnance plant there.

“I didn’t have a Social Security card,” Charton said, adding that he had not needed one to pick fruit in California. “They wouldn’t let me go to work without one [in Maumelle].

“My brother, Clifton, was hauling a truckload of men down there [to Maumelle] to work every day on the back of a bob truck,” Charton said. “I rode the truck to Maumelle and walked the 17 miles to the Federal Building at Little Rock and back. I barely got back in time to catch the truck back home that night. But I got my Social Security card so I could work the next day.”In the spring of 1942, Charton went to a machinist school in Morrilton that was set up by the U.S. government.

Charton said the government had known the war was coming and had established schools throughout the country to train men for various jobs.

From there, he was sent to Bridgeport, Connecticut, to work for General Electric.

He said he started out “spat welding switch boxes for submarines.” He moved on to welding in an assembly-line booth, then to a booth to repair the boxes.

“In the fall of 1942, while working there, I signed up for the underwater welding job in Pearl Harbor,” he said. “I came home to wait to be called. But they didn’t call soon enough, so I decided to enlist in the Navy.

“I always thought it was my lack of education that kept me from getting that job.”

The Navy sent Charton to San Diego, California, for recruit training. He said he had to learn to swim before he could ship out. He did, finally, he said.

“It would be months later before I learned to swim out in the Pacific Ocean around the islands,” he said.

“We had to jump in with dungarees on and take them off, tie knots in each leg, then throw them over your head for a temporary life jacket,” he said.

“I managed that pretty good … by going under and popping up a time or two until I got the job done,” he said with a laugh.

After six weeks of boot camp, Charton was assigned to the Naval Armed Guard.

Marine ship, not to protect the ship but to force the enemy to sink the ship instead of capturing the war cargo,” he said.

He was sent by train to San Francisco and assigned to the SS Villa, a cargo ship, or Liberty ship.

“They were called Liberty ships because of the way they were built,” Charton said. “By welding all the seams, they could build one in 30 days.

“I was a seaman first class in the gun crew. We ate in the same mess hall as members of the Merchant Marine seaman but had our own sleeping quarters on the fantail of the ship beneath the guns. Aboard the ship, we had one 3.50-caliber gun and three 20 mm machine guns.”

Charton said they sailed under the Golden Gate Bridge and into the Pacific Ocean.

From there, Charton’s ship sailed to Sydney, Australia, to take on supplies, through the Tasmanian Sea, on into the Indian Ocean and to Calcutta, India, where they unloaded the ship.

“The cargo was flat sheets of steel about 10 by 20 feet with round holes in them to be used in the jungles of Burma for temporary air strips for planes to land on,” he said.

From there, they sailed down to Portuguese, East Africa, and picked up another cargo on the way to Durban, South Africa. Leaving Durban, the ship sailed north into the North Atlantic Ocean, on into New Orleans.

“I was assigned to the SS Point Vacate, which was a seagoing tug,” Charton said.

“A few days later, I returned to New Orleans with my new wife. In about three weeks, she returned home. By now I was a gunner’s mate third class.

“My orders were to take my gun crew to Jacksonville, Florida, by train and report aboard the [SS] James K. Paulding, a cargo ship.”

Thirty days later, the crew loaded a cargo of war supplies and sailed across the North Atlantic to England and came back to New York.

“We made several shuttle trips carrying supplies to England, Scotland and France,” he said, “one of which was a load of ammunitions picked up at Bangor, Maine, and taken to England. Another was a load of amphibious vehicles delivered to Cherbourg, France, the night and morning of the invasion on D-Day (June 6, 1944).

“We made several more shuttle trips between the East Coast and France,” Charton said. “I spent Christmas Day 1944 picking up dead bodies and pieces of bodies at Cherbourg, France, during the Battle of the Bulge.”

In February 1945, Charton applied and was accepted to go to school for training to be specialized on the 5-inch/38-caliber gun.

“At the end of the special training, their policy was to pick the gunner’s mate with the highest grade-point average for instruction to teach the trainees on the 5.38 gun,” he said. “I was that person.”

Charton was stationed at Norfolk, Virginia, as an instructor on the 5.38 gun until the end of the war. After the war ended, the school was converted into a discharge center.

“I was assigned to a desk, interviewing and filling out discharge papers until my number came up for discharge,” he said. “I was discharged on Nov. 2, 1945, with a gunner’s mate first class rating, with all exams passed to become a chief gunner’s mate.

“My commanding officer tried to get me to re-enlist for four years into the regular Navy as a chief gunner’s mate, but I decided I wanted to come home.”

Charton returned to Morrilton and his wife, Irene. The Chartons were married 71 years before she died on Jan. 10 of this year. The couple had three children — Lavonna Gregory, who lives in Plumerville; Patty Rainey, who lives in Morrilton; and Rickey Charton, who lives in West Monroe, Louisiana, but also has a home near Morrilton. Eight grandchildren and 13 great-grandchildren complete the family.

Charton did a variety of things after the war. He raised dairy cattle, grew row crops and even had a Christmas-tree farm. But most of all, he planted pine trees.

He invented the C&G Tree Planter, which is a heavy-duty seedling planter. He teamed up with Gangluff Brothers Welding of Morrilton and received a patent for the planter in 1982.

“I traveled 40,000 miles pulling one of those behind me,” Charton said, adding that he took the planter to dealers and demonstrated it on-site. His wife often accompanied him.

Reflecting upon his military service during World War II, Charton said he believes the good Lord was with him.

“There were boats all around me that were blown out of the water,” he said, a tear in his eye, “but I never had one blown out from under me.”