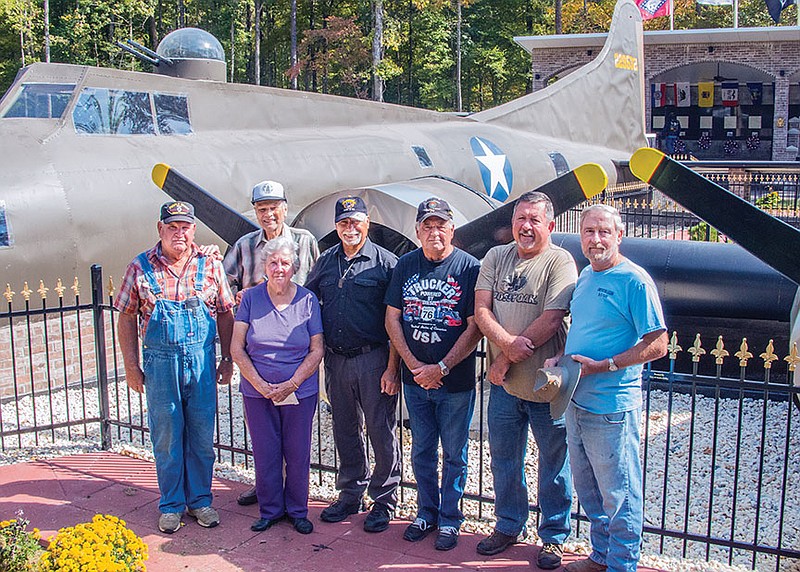 Among recent visitors to the B-17 crash site at the Grant County Veterans Memorial Park in Sheridan are, from left, Mike Harrington, Curtis McCool, Betty Tribble Barnes, Nelson Mears, Butch Davis, Don Culpepper and Gary Kelley. This replica of the plane is the centerpiece of the park, which will be the site of a Veterans Day program presented by the Grant County Chapter of Disabled Veterans at 2 p.m. Wednesday; all are invited.

SHERIDAN — A steady stream of visitors entered the Grant County Veterans Memorial Park on a recent day in October. They had come from far and wide especially to see the site where the B-17 Flying Fortress No. 42-29532 crashed on March 12, 1943, killing all nine airmen aboard.

Many people had missed the dedication of the park on Oct. 12 but had heard about it and wanted to see it for themselves. Still others involved in making this park a reality come to the site nearly every day.

A replica of a B-17 airplane sits front and center in the park, which also honors Grant County veterans killed in action since World War I. The park also pays tribute to Civil War soldiers — both Confederate and Union — who fell during the Battle of Jenkins Ferry, which occurred nearby.

To the rear of the plane is a black granite wall containing names and information about each of the airmen who perished that day during World War II.

To the front of the plane is the original memorial to the B-17, erected on March 10, 1944, but long forgotten by most people.

Attached to the other side of the original monument is a plaque that honors the late Jerry Jackson of Benton,

who, with his father in 1984, first discovered the long-forgotten memorial and brought it back to life as his Eagle Scout project, working in tandem with the Grant County Museum to honor these World War II veterans.

Nelson Mears, Grant County Veterans Service officer, is among those who have worked to establish the park. He has become the project leader. He admits it is near and dear to his heart, as it is to other members of Sheridan American Legion Post 30 and Sheridan Disabled American Veterans Chapter 56 that took on the project of building the memorial park about four years ago.

“It wouldn’t have happened without a great group of volunteers,” Mears said. “Most of them are veterans.

“We also could not have done it without the help of our county sheriff. He allowed inmates, who volunteered, to help us.”

One of the first questions visitors might ask about the park is, “Why was this plane flying over Sheridan, Arkansas, during World War II?”

Mears tells the story time after time. It can also be found on the website b17memorialpark.com.

“The B-17 was assigned to Smoky Hill Air Field in Salina, Kansas. The entire squadron, except for this aircraft, left several weeks before for Florida,” Mears said.

“This plane was held back because of mechanical problems. Two days before it left Salina, they replaced two engines. The day before it crashed (March 11), the test engine had hydraulic problems, and the plane was condemned,” he said.

“Yet it was sent up on March 12 for West Palm Beach, Florida. From there, the crew was to go to Europe to fight in the war,” Mears said.

“The plane should have never gotten any farther than Searcy,” he said. “At 4,500 feet, there was a high thunderstorm.

They should have landed or gone back to their point of departure. But they wanted to get to Florida and then to fight, so they turned south toward Louisiana.

“By the time they got to Sheridan, the plane was vibrating. They brought the plane down lower, circling Sheridan. It was on fire and crashed about 3:30 p.m.”

Several local veterans were at the park recently to speak with visitors.

Mike Harrington of Sheridan, a decorated Army veteran who served in Vietnam, helped landscape the park.

“The first time I came here as a kid, it was just a little monument in the woods. It was like a swamp, as I remember it,” he said.

“Then I came here one day and met Nelson and some others and told Nelson if he ever needed anything to let me know. I didn’t really expect to hear back from him,” Harrington said.

“But the next thing I knew, he was asking me if I had a tractor, and I said, ‘Yeah.’

“He said, ‘We need you,’ and I showed up and have been coming here ever since.

“I love the park,” Harrington said. “I am proud of the fact that people come here to see it and to see the sacrifices that have been made for them.

“Young people need to know about this. I envision school buses stopping by here with kids getting off to look at the memorial. They need to learn of the sacrifices that have been made for them.”

Gary Kelley of Sheridan, an Air Force veteran who served in Guam during the Vietnam War era, did some of the metal work at the park.

Kelley said he grew up around Pine Bluff and never knew about the crash site.

“But now I come here faithfully,” he said.

Butch Davis of Sheridan is another Army veteran of Vietnam who is involved with the park.

He was born in Augusta but moved to Sheridan when he was 2.

“I knew about the monument growing up but didn’t know much about the crash,” Davis said. “The more we found out about the plane, the more we wanted to make the park.

“It’s an amazing place. I’m happy for the families of the men who died here. … Now they are being recognized along with other World War II veterans for the sacrifices they made.”

Don Culpepper, an Army veteran who served in Vietnam, said he has been involved with the park for about two years. He primarily supervised the “nonveterans volunteering in orange” (the inmates).

Mears said the American Legion Post learned about the condition of the original monument through the efforts of World War II veterans Dr. Curtis Clark and the late Floyd Aldridge.

“In 2010, they saw that 1944 monument and the condition it was in. Floyd looked at Dr. Curtis and said, ‘This is not right. We’ve got to do something to honor these veterans,’” Mears said.

“They went to the American Legion, and Cmdr. Jerry Sullivan took it from there,” said Mears, who said Sullivan asked him to design the B-17 Crash Site Memorial. At the time, Mears was commander of the local DAV chapter.

Fred Puckett of White Hall, a decorated veteran of the Korean and Vietnam wars, was chaplain of the local American Legion and DAV chapters. After the B-17 Crash Site Memorial was approved and the project started, he asked Mears to take a look at the White Hall Veterans Memorial to see how their killed-in-action were being honored. He then asked Mears to redesign the memorial into a veterans memorial to honor all Grant County killed-in-action veterans,plus the nine members of the B-17 Flying Fortress.

Mears agreed, and the current park is the result of that collaboration.

Mears, who is a Vietnam war-era Navy veteran, said he agreed to help with the project, but he wanted to learn more about “the boys” (the crew) and what happened to the plane. Mears said as he has learned about “the boys,” the park has really become “personal” for him.

“This is a memorial,” he said. “Their bodies are underneath that plane. They are still in the ground.”

“The total of all grants awarded to date are under $45,000, but because of individual donations and gifts in kind, we have been able to build a veterans memorial park that is valued in excess of $1 million and will become known worldwide,” Mears said.

“This will be our first event since the park’s dedication, and all are invited to attend,” Mears said. “I will be speaking on behalf of our local DAV Chapter 56.”