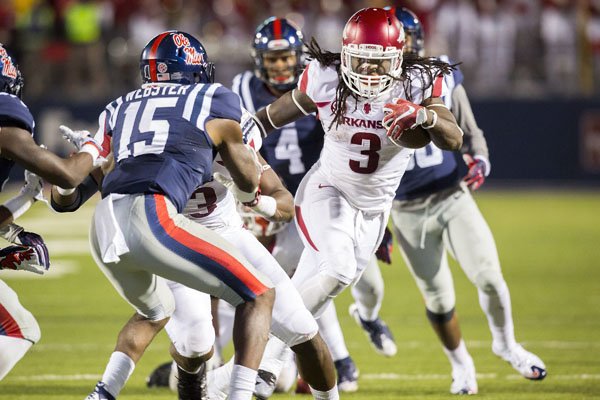 Arkansas running back Alex Collins carries the ball on a fourth-down play on Saturday, Nov. 7, 2015, during overtime against Ole Miss at Vaught-Hemingway Stadium in Oxford, Miss.

Now the Razorbacks can't lose one.

The game was tied seven times, including at the end of each quarter before going into overtime.

"We went blow for blow," Arkansas junior tailback Alex Collins said. "They hit us, we hit them.

"We just tried to keep fighting. We persevered and made it through."

It was the second consecutive SEC overtime victory for the Razorbacks, who beat Auburn 54-46 in four overtimes Oct. 24 in Fayetteville.

Arkansas got its first SEC victory this season when it won 24-20 at Tennessee Oct. 3. The Razorbacks had lost their previous 10 games that were decided by seven or fewer points going back to the end of the 2012 season when LSU beat Arkansas 20-13.

"It's been a ride," Arkansas senior quarterback Brandon Allen said after setting a school record with six touchdown passes against Ole Miss. "Anything can happen in a season."

The Razorbacks have turned their season around after a 1-3 start that included a 16-12 loss to Toledo in Little Rock and a 28-21 overtime loss to Texas A&M in Arlington, Texas.

"The guys here, our perseverance and our fight, I've never seen anything like it," Arkansas junior tight end Hunter Henry said. "We've gone through so much in the past three years, and to get these last two [SEC] games like this ... the never-give-up attitude, it's awesome to be around."

"It's a man's league, man," Bielema said. "It's fun to have more wins than you do losses. I didn't plan on it taking this long."

Bielema said he quickly sought out Arkansas Athletic Director Jeff Long after the Ole Miss game to express thanks for the faith he's continued to show in the program.

"The one thing I've kind of tried to sell to our players is once you taste it, you're not going to want to stop drinking it," Bielema said. "The success we're having right now, and some of the teams that we're beating ... that does a lot for us in recruiting.

"I knew we had a good team. Now we're 5-4 and everybody's going to say, 'Ah, Bielema, shut up!' But we just beat the team that was the frontrunner to be the SEC West champ."

Bielema said the Razorbacks remained positive through their tough start.

"If you go and watch us practice, we don't practice like a 5-4 team," he said. "You'd think they're undefeated, super champions of the world.

"They just have a lot fun. Our practices are about as upbeat and uptempo as anything I've ever been a part of.

"It's sad we've only got three more opportunities guaranteed, because this is a group I'd coach for a long time."

The Razorbacks had a wild celebration on the field after beating Ole Miss -- including some of Allen's teammates lifting him up on their shoulders -- and carried the good times into the visiting locker room.

"It was ecstatic just looking around at the coaches and players jumping up and down," said Collins, who rushed for 108 yards and surpassed the 1,000-yard mark for a third consecutive season. "Everybody was happy, giving each other high-5s and hugs.

"We think this is what we put the hard work in for, this satisfaction we feel right here and right now."

The Razorbacks were packing added confidence for their trip to Ole Miss after breaking an 11-game SEC road losing streak against Tennessee last month.

"We told our guys it was going to take all 70 guys to come over here and play a 60-minute game, and if we had to play a little bit longer we would," Bielema said. "I know our guys prepared to win. They decided in their hearts that they were never going to leave that field without it.

"There were some gutsy performances out there."

Mathematically, the Razorbacks still can win a share of the SEC West title.

"We've got to try to stay calm and take it one day at a time," Collins said. "We don't want to think ahead. We've got to worry about the next game."