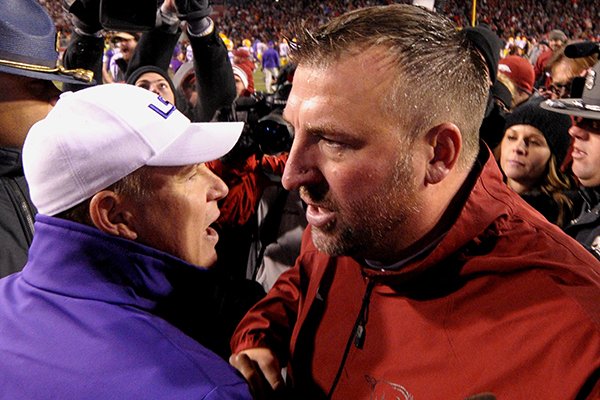 FAYETTEVILLE — No. 9 LSU is the favorite Saturday night in Death Valley and deservedly so.

LSU fans live for night games in Tiger Stadium, which from this seat is the best atmosphere in college football. A game under the lights in Baton Rouge should be on every sports fan's bucket list.

The Tigers are 48-5 in home night games under coach Les Miles and have only lost to three unranked teams there in day or night games since 2004.

"There are people that sit on their hands and there are people that go crazy, and these are people that really get behind their team," said Arkansas offensive line coach Sam Pittman, who has been to Tiger Stadium as an assistant coach with two teams. "It's going to be unbelievably loud over there and it's special for road teams (to be there) as well."

Allen not bitter about past

Despite the venue, Arkansas has a chance to upset LSU. The Razorbacks did, after all, just win a road game over the team that was in the driver's seat in the SEC West.

After opening at 9 points, the betting line for this game has been lowered to 7.5 points in favor of the Tigers. With the home team typically given about three points, the experts in Las Vegas appear to think Arkansas will be competitive.

It isn't far-fetched to think the Razorbacks can stay with LSU. The games in this series have been entertaining throughout the years and ripe with upsets and close calls.

The last time Arkansas went to LSU, the Razorbacks nearly won their first SEC game of the year in the season finale, but the Tigers hit a long touchdown pass in the final seconds to escape.

Arkansas got revenge last season by snapping a 17-game conference losing streak in a shutout win over the Tigers. The Razorbacks have now won five of their last eight conference games.

As evidenced at Ole Miss, Arkansas' offense has the capability to trade blows with the best teams. The Razorbacks are averaging 473 yards and 34.8 points per game, and this LSU defense is not as good as in years past, allowing 331 yards and 23.5 points per game.

Arkansas has its share of flaws, but here are three reasons the Razorbacks have a chance to pull the upset in Death Valley:

This isn't to say the Razorbacks will completely take the Heisman favorite out of the game the way Alabama did last week.

But Arkansas' strength defensively is against the run. The Razorbacks rank 27th nationally in rush defense, allowing 129 yards per game.

Alabama running back Derrick Henry had arguably his worst game of the season against Arkansas, finishing with 95 yards and a touchdown on 27 carries.

Auburn's Peyton Barber is the only running back to go for more than 100 yards against the Razorbacks this season, and needed four overtimes to make it happen. Arkansas allowed Ole Miss quarterback Chad Kelly to rush for 117 yards last week.

The key to slowing Fournette is for Arkansas to tackle better than it has done the last two weeks.

"We've got to work smart this week to find time where we do tackle and get the job done," Arkansas defensive coordinator Robb Smith said. "That's an obvious place we have to improve.

"The top thing we've got to do is to make sure we have enough people down in the box to stop their running game."

As a freshman and with a younger offensive line, Fournette rushed just five times for 9 yards last season against Arkansas.

"The runs for him were not working," LSU coach Les Miles said after the game.

Fournette may well top 100 yards Saturday, but the Razorbacks have the capability to slow him enough that LSU quarterback Brandon Harris should have to make more throws than he is accustomed to doing.

The sophomore has been hit-and-miss this season. He struggled in games against Syracuse and Eastern Michigan, but was efficient in wins over Florida and South Carolina.

Harris' best attribute is that he doesn't commit many turnovers, throwing his first interception of the season last week at Alabama.

He has not been asked to be the Tigers' playmaker much and when it did happen last week, he completed only three of 10 passes for 38 yards after halftime.

We'll get a first-hand look the next two weeks as to if there really is something to playing a team the week after Alabama.

LSU is coming off a game against the Crimson Tide and Mississippi State will be next week, too.

According to a column written last month by AL.com's Kevin Scarbinsky, SEC teams are 21-25 in the week following their game against Alabama since 2008.

By contrast, teams that took a week off after their game against the Crimson Tide are 6-2 the next time out.

Neither Arkansas nor LSU looked good the week following their games against Alabama last season. The Razorbacks trailed 38-6 at halftime to Georgia before losing by 13 points and the Tigers were shutout by Arkansas.

Both teams considered those losses their worst performances of the season.

This season the Razorbacks had a bye week following their game against the Crimson Tide. Arkansas beat Auburn in four overtimes its next time out.

Asked about playing a team coming off a game against Alabama, Arkansas coach Bret Bielema indicated the Tigers may be more capable of bouncing back than most teams.

In addition to the physical toll, there is a mental aspect to keep an eye on. LSU was No. 2 nationally and undefeated before last weekend.

It has to put that frustration behind it fast, which is not always easy for a group of 18- to 21-year-olds.

Prior to this season, Arkansas had played in front of 100,000 fans 10 times in program history.

Saturday will be the third time it has happened in 2015.

The Razorbacks faced similar environments at Tennessee (attendance: 101,265) and Alabama (101,821) this year. Arkansas beat the Volunteers and led the Crimson Tide late in the third quarter before Alabama pulled away.

"Any kind of exposure you can get to loud noise and crowd noise, experience from the past it's definitely helpful for us," quarterback Brandon Allen said.

Arkansas struggled with crowd noise in its first game away from home against Texas A&M, committing four procedure penalties. But in its three true road games, the Razorbacks have only committed one false start penalty and moved the ball well against Tennessee and Ole Miss.

The biggest difference in Arkansas' road success has been its offensive output.

Although somewhat skewed by the shootout last week in Mississippi, Arkansas is averaging 440 yards and 30.3 points, and has committed one turnover through three road games this season.

Compare that to three conference road games last year when the Razorbacks averaged 339 yards and 15 points, and committed at least one turnover in every game.