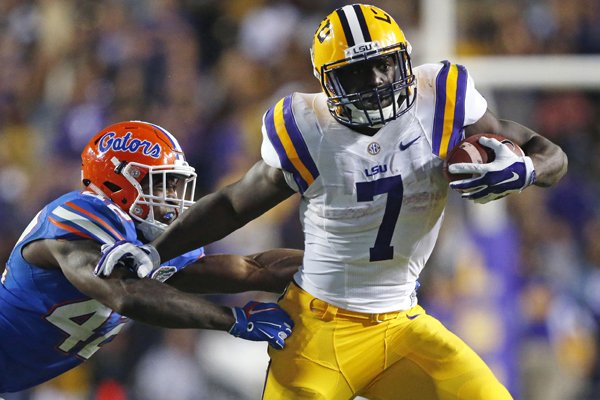 Nobody has stopped Fournette, the nation's rushing leader with 1,383 yards and still a viable Heisman Trophy candidate, like Arkansas did last season.

The stats don't lie. Fournette rushed five times for a career-low 9 yards, with a long gain of 4 yards, on a long night in Fayetteville last Nov. 15 as the Razorbacks prevailed 17-0.

Alabama limited the sophomore to 31 yards on 19 carries last week, the first time Fournette had been held to fewer than 150 rushing yards all season.

Fournette will be aiming for a bounce-back game and Arkansas will be looking for a repeat performance against Fournette when the SEC West rivals square off at 6:15 p.m. Central Saturday at Tiger Stadium in Baton Rouge.

The Razorbacks know they are facing a different Fournette this time.

"He was really good a year ago, and he is now a great running back," Arkansas Coach Bret Bielema said. "He is violent, he is strong, he is secure in what he sees and what he believes in. He reads it and does it and doesn't ever think twice."

Fournette ran for 159 yards and three touchdowns against Mississippi State to open the season and wasn't slowed down until last week.

Fournette ravaged Auburn, Syracuse and Eastern Michigan in succession for 228, 244 and 233 yards and a combined 8 touchdowns to become the first player in SEC history with three consecutive 200-yard games. He surpassed the 1,000-yard mark before halftime of a Week 5 victory over South Carolina.

"He's impressive," Arkansas defensive coordinator Robb Smith said. "I think he has excellent vision and can find any opening. He can cut very quickly and he's strong and powerful, so that once he gets his shoulders turned and he goes downhill, he's a very difficult runner to tackle."

" I wish he'd leave," Jackson said. "I don't want him back next year. He's really a special runner. He's an angry runner."

Fournette might have been angry leaving Fayetteville last year.

"I'm not going to say it was a bad game," Fournette said of his 9-yard performance. "Like I said, that was one of our bad games that we had as a whole. It happens. Happens to the best of us. Michael Jordan had bad games, but he always came back from them."

Fournette said he was still in a learning phase at that stage of his freshman year, although he rebounded for a season-best 146 yards in his next game at Texas A&M.

LSU Coach Les Miles said he expects Fournette to get right back to work after the sub-par effort in the Tigers' 30-16 loss at Alabama.

Fournette is a year stronger and wiser, and the threat of a raw, drizzly, wind-blown evening like LSU faced in Fayetteville last year does not exist in Saturday's forecast for Tiger Stadium. The Razorbacks also don't have standout defenders Martrell Spaight, Trey Flowers and Darius Philon, who all played superbly against the Tigers last season.

However, the same architects of last year's master plan on defense -- Smith and Bielema -- still reside on the Arkansas sideline.

"Any time you want to stop the run game, you've got to be able to dictate daylight, and that starts with our front four," Smith said. "It's all about you want to try and force the football to where you can hopefully build a numerical advantage, and that's what, at times last year, we were able to do."

Fournette wasn't the only Tiger who struggled at Reynolds Razorback Stadium last year.

LSU managed 36 rushing yards on 32 carries, an average of 1.1 yards per carry. The Razorbacks sacked Anthony Jennings four times for 36 yards in losses. Jennings completed 12 of 22 passes for 87 yards and the Tigers amassed 123 yards total offense.

The Tigers have turned to Brandon Harris over Jennings at quarterback, and the sophomore threw his first interception of the year last week after helping LSU to a 7-0 start and the No. 4 ranking in the first College Football Playoff poll.

Arkansas, which ranked No. 10 nationally in run defense last season, is ranked No. 27 this season, allowing an average of 129 rushing yards per game.

Alabama won the blocking battles up front consistently and often forced Fournette to bounce to the edges, where defenders strung him out and brought him down.

"We're just as capable of stopping the run as any other SEC team," Arkansas defensive lineman Jeremiah Ledbetter said.

"One thing Alabama did a great job of, they created a new line of scrimmage," Arkansas defensive backs coach Clay Jennings said. "They made the offensive line go backwards instead of letting them fall forward. If we can do a great job of keeping them going sideways and do a great job of playing with leverage and fitting in the right place in the back end, we'll be OK."