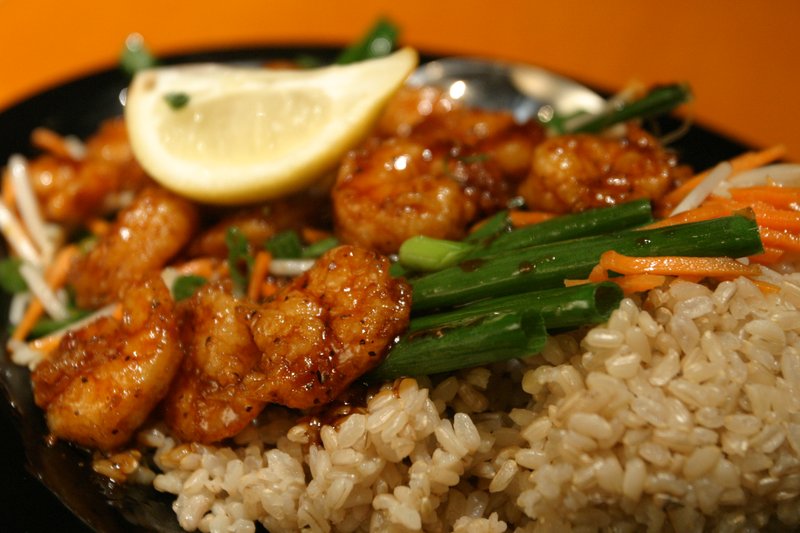 Lee Strother, principal and vice president of brokerage at real estate broker Colliers International, says that through his representation, Pei Wei Asian Diner, LLC has leased 3,000 square feet at 17701 Chenal Parkway, Little Rock, which happens to be the address of the Promenade at Chenal. Although the folks in the upscale shopping center's marketing department wouldn't confirm or deny the pending new tenant, Cassie Cooper, Pei Wei's assistant brand manager, did confirm that the lease has been signed and that the restaurant will be sharing a building with a business that has not yet signed its lease. Pei Wei's first Little Rock outlet opened in October 2006 in the Midtowne Little Rock center, West Markham Street and University Avenue; there's also one in Rogers.

Two different sharp-eyed observers have reported to us the apparent closure of Grampa's Southern Catfish, 5311 Arkansas 5 N., Bryant. The phone number, (501) 407-0000, had not been disconnected by Tuesday's deadline; last several times we got an answer, it was a cheery voicemail message offering the restaurant hours, though off and on it has also returned an automated message that the voice mailbox was full. You would believe that nothing whatsoever was up if you consult the restaurant's website, grampassoutherncatfish.com. You may recall Grampa's moved to Bryant several months ago from 9219 Stagecoach Road, Little Rock, where it had gone through several ownership changes within the founding family and had a speckled history for about two years in which it closed and reopened and went through remodelings.

Co-owner Buck Sayyah says inspection issues have continued to delay the opening of Arbela Middle Eastern Grill, on the ground floor of the Tower Building, 323 Center St. (actually on West Fourth between Louisiana and Center streets), Little Rock, where Natchez was the most recent previous tenant. As of our deadline he was awaiting a final check on things he'd corrected, but still cannot predict just when they'll open their doors. Meanwhile, he says he's in the process of also doing something about the restaurant's phone number, (501) 374-2633, which had been returning a "disconnected or no longer in service" message.

Meanwhile, no progress to report on the possible opening of Jerky's Spicy Chicken and More at 521 Center St., Little Rock, which has been pending since at least Labor Day, or The Shack, at 402 E. Third St. in Little Rock's River Market District, which has been "coming soon" since October 2014.

However, neither of these places holds a candle to the area’s longest “advent” message, which still belongs to Kobe, which a sign on a vacant lot on Financial Centre Parkway indicated was “coming soon” for five years. Kobe eventually opened as part of an L-shaped strip center, so hope can continue to spring eternal.

Professional teams from Arkansas Ale House at Diamond Bear Brewing, Country Club of Little Rock, Midtown Billiards, So Restaurant-Bar, the Clinton Presidential Center and Simply the Best Catering (whose lately acquired chef, Brian Kearns, was the 2013 winner) and several amateur teams not officially affiliated with any area restaurant will be competing in the Arkansas Times Whole Hog Roast, 5-10 p.m. Saturday, Argenta Farmers Market Plaza, 520 Main St., North Little Rock. The public food serving begins at 6:30; each ticket holder will get three tokens (additional tokens will be available for sale), with which they can vote for people’s choice for Best Professional Team, Best Amateur Team and Best Amateur “No Butts About It” Team. A gated festival area selling beer and wine ($5) will be available in a gated area; soft drinks and water will also be available ($2). Big Steel River and Brown Soul Shoes will perform. Tickets are $15 in advance, $20 at the door, $10 (music only) after 8. Visit tinyurl.com/pzzfxsh.

And Arkansas Tech University at Russellville is one of three schools winning $5,000 grants from the Washington-based Campus Kitchens Project, a nonprofit empowering students to fight hunger and food waste. Tech, Baldwin Wallace University in Berea, Ohio, and Fayetteville (N.C.) State University submitted videos in a competition explaining why their community would benefit from a Campus Kitchen. They’ll use the money to start their own Campus Kitchen to provide “free, nutritious meals to food insecure individuals” by using donated food that would otherwise go to waste, according to a news release. Arkansas Tech, the top vote getter, will also receive a $1,000 bonus.