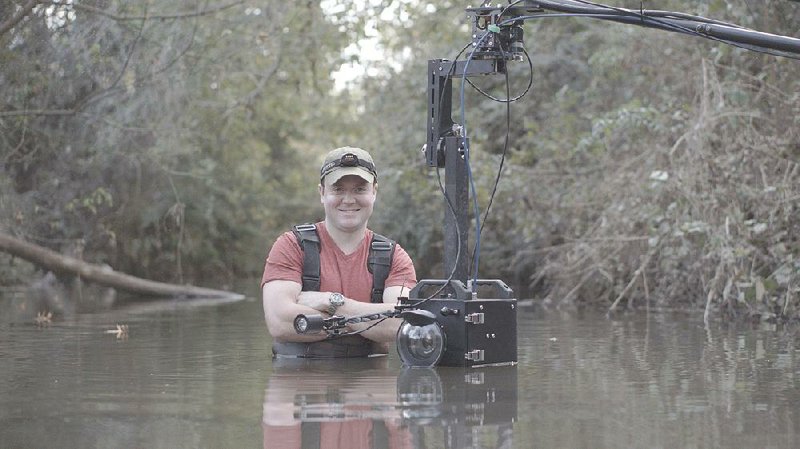 Robert Champ Williams — an award-winning videographer who documented aquatic life and who worked at the University of Arkansas at Fort Smith — died last week.

Robert Champ Williams, a 32-year-old videographer known for his award-winning work capturing images of underwater wildlife, was found dead Saturday at his studio near Fort Smith.

Williams’ studio in Pocola, Okla., housed creatures in large aquatic tanks. His body was found in one of the tanks, said Chief Steve Howard of the Pocola Police Department.

“It’s our understanding that he was still working on a documentary involving aquatic life in this part of the country,” Howard said.

At the time of his death, “that’s what it appears he was doing,” Howard said. Family members discovered Williams’ body.

The cause of death remains unknown pending a determination by a medical examiner, but Howard said no foul play or criminal activity is suspected.

Williams had returned to his Fort Smith roots and began working in 2009 at the University of Arkansas at Fort Smith after attending college and building his video skills in California and Washington.

He won a 2009 Emmy award from the Northwest Chapter of the National Academy of Television Arts & Sciences, among other honors. An underwater diver, Williams’ work was featured on several television outlets, including television channel Nat Geo Wild, according to his website.

Williams found time for his wildlife projects while working full time for the University of Arkansas at Fort Smith, helping with video and multimedia projects.

Stacey Jones, the university’s associate vice chancellor for campus and community events, praised Williams’ efforts in developing online broadcasts of university sporting events, as well as his other talents.

“His passion for the outdoors and working in the water was very impressive. In some cases, he invented his own lighting for his own shots,” said Jones, describing Williams as an adventurous spirit and nature lover who had recently become involved in underwater cave diving.

Turtles were a passion for Williams, Jones said, with one nearly 200-pound snapping turtle among the animals kept at his studio. Over the past three years, Williams also gave nature presentations on turtles for youth at the Janet Huckabee Arkansas River Valley Nature Center in Fort Smith.

Williams brought several of his animals to the wonderment of his youthful audience, said Kelly Mulvihill, the nature center’s facility director.

“You could tell he had a lot of passion for what he did because of the way he presented those programs and the way he engaged the audience,” Mulvihill said. “I think everybody loved turtles and wanted to do what he did by the time his program was finished.”

According to obituary information, Williams held a degree in marine biology. Mulvihill said the nature center plans to host a screening of some of Williams’ video work in December.

Jones said Williams was a friend and “as much an educator as a videographer.”