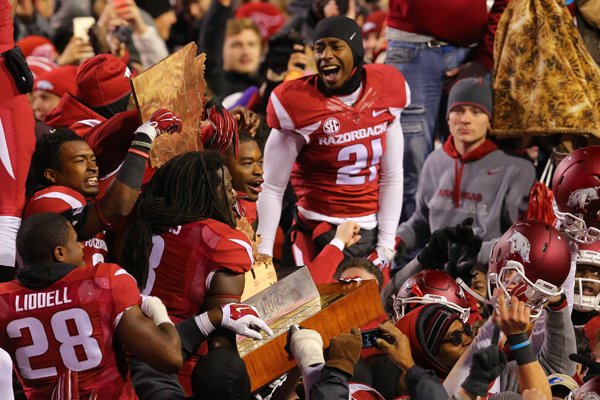 Arkansas players and fans celebrate with the boot on the field after shutting out LSU Saturday, Nov. 15, 2014, in Fayetteville.

BATON ROUGE -- The mad dash made by Arkansas Razorbacks players to seize The Boot last Nov. 15 warmed the heart of Little Rock entrepreneur David Bazzel on a bone-chilling afternoon in Fayetteville.

Arkansas fans stormed the field at Reynolds Razorback Stadium to join in the celebration after the Hogs ended a 17-game losing streak against SEC competition with a 17-0 victory over No. 17 LSU.

What has gotten into Brandon Allen?

"I'll never forget it," Bazzel said. "I could see the whole team gathering up and I could see them leaning, and I thought, 'Oh my gosh, they're going to do exactly what I had envisioned and what I actually encouraged them to do.' "

The Boot will be on the Arkansas sideline at Tiger Stadium for today's 6:15 p.m. game. The Razorbacks (5-4, 3-2 SEC) will be looking to retain the trophy for the first time since 2007-2008, two classics in the border rivalry series.

Bazzel, the former Arkansas linebacker and creator of the 170-pound "golden" boot, played a big part in Arkansas' emotional reaction to claiming the trophy.

An invitation by Coach Bret Bielema led to Bazzel addressing the Razorbacks on the eve of last year's game.

In a speech that was filmed by ESPN, Bazzel told the team that if it won, it was fine to shake hands with the Tigers, but then, "Once it's done, I want 5 of you, 10 of you, 20 of you, or all of you to run your asses down there and get that boot."

Bazzel had to make an apologetic phone call to his mother for his language, but the Razorbacks responded to Bazzel's words.

A large number of Razorbacks, led by defensive backs D.J. Dean, Tevin Mitchel and Kevin Mitchel, sprinted over to the LSU sideline as the game ended to engulf the trophy just as defensive ends Trey Flowers and Deatrich Wise doused Bielema with a bucket of water.

LSU has never showed that type of enthusiasm toward winning The Boot, but LSU Coach Les Miles said the series with Arkansas is cherished, even after the Tigers disengaged from their Thanksgiving weekend game against the Razorbacks to strike up a regular-season finale with SEC newcomer Texas A&M.

"Certainly it's a very important piece," Miles said of the The Boot. "We recognize when we don't have it, recognize that we're playing for it. It's certainly an important rival, and one that befits a trophy the magnitude of The Boot."

"It doesn't matter when we play them," Allen said. "It really doesn't bother me or anybody on this team I don't believe. Any time we have LSU as an opponent, we're jacked up to go play them."

Former LSU and NFL defensive lineman Booger McFarland, now an SEC Network analyst, said the Tigers simply have more historic rivalries than the one with Arkansas.

"It's probably second or third on the list, maybe fourth, depending on who you talk to," McFarland said. "I think overall LSU views probably Ole Miss, Auburn and then probably Alabama, and then Arkansas falls beneath that. It's not disrespect to Arkansas, I just think it's the history of those other rivalries that are better."

Many fans of Arkansas, which now ends its season with Missouri, had considered the LSU game the closest thing to a rivalry for the Hogs over the past couple of decades.

Include coach and players in that group.

"This is Boot week," said Arkansas tackle Dan Skipper, a native of Colorado who said he dreamed of playing in venues like LSU's Death Valley as a kid. "This is why you come to Arkansas, to get the opportunity to play a night game in Tiger Stadium."

Arkansas and LSU played on the Friday afternoon after Thanksgiving for all but a few years of their 22-year run as year-end rivals.

"That was a prime showcase for the state of Arkansas and the Razorbacks and for Louisiana as well," said former Arkansas standout Marvin Caston, a native of Winnsboro, La., who is now an associate director of the Razorback Foundation. "You were the only game on that day. Everybody's still sitting around recovering from all the food they ate on Thanksgiving, and most of the time those were pretty good games. It went down to the wire and everybody in the country is watching that one game.

"Whoever wins that game is going to hear it. You get bragging rights for a year."

Caston and his friend, the fellow Winnsboro native McFarland, had a bet on last year's game.

"If you talk to Booger, ask him if he took a picture in that Arkansas shirt," Caston said. "I really enjoyed having that one-up over him because of our friendship."

Said McFarland: "Technically, yes, I've worn the Arkansas shirt, but no, there's not a picture yet. I guess I need to get a photo for him."

Bielema, whose alma mater Iowa played Wisconsin, the school where he served as head coach for seven seasons, for the Heartland Trophy, believes in trophy games. He had the The Boot placed just outside the elevators on the bottom floor of the new Fred Smith Football Center.

Last year's outpouring of emotion on Frank Broyles Field, with players and fans reveling in their reclamation of the trophy, contrasts with the Tigers' lower-key reactions to their victories in the series.

" I think last year was just a culmination of the season, all the struggles they'd gone through to try to get that SEC win and everything just built up to that day," said Keith Jackson, the Little Rock native and color analyst on the Razorback Sports Network. "It was nothing against LSU. It's just that moment was so exciting for the Razorbacks, the fans as well as the players.

"They just bolted over there and got that trophy. I don't know if LSU is going to see it the same way."

Bazzel admitted that usually a handful of players go get the Boot.

"Last year is the first time that's ever happened," he said. "If LSU wins the game, they may remember what Arkansas did last year.

"It was a way for Arkansas to unleash some emotion and say 'We're back, we won this game.' I don't care what the situation is, when you beat an LSU team it's significant."