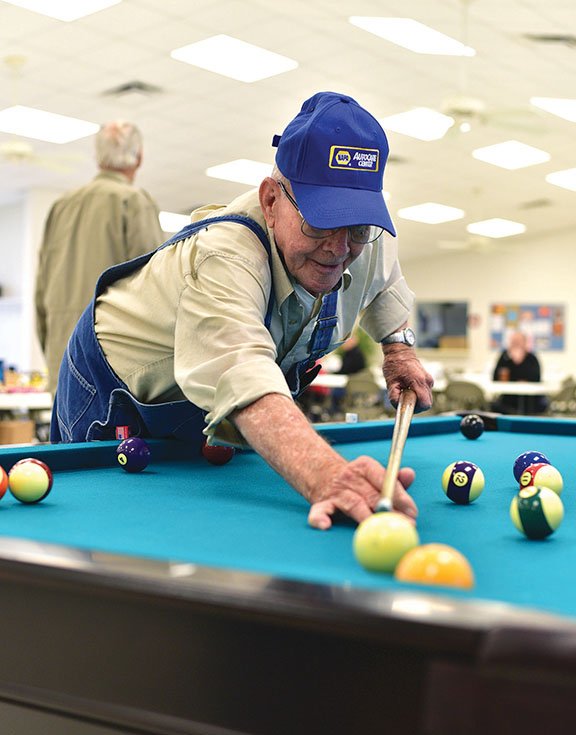 Winston Tucker of Shirley shoots pool last week at the Clinton Senior Center. Tucker, 80, said he has been playing since he was about 7 years old because his father owned a pool hall in Shirley. Tucker, a retired truck driver, said he plays almost every day. The Clinton Senior Center has a new pool table, which the players said makes playing more fun.

CLINTON — Winston Tucker sunk ball after ball on the new pool table at the Clinton Senior Center. He ought to be good — he’s been playing for 73 years.

Tucker, 80, is one of the men who play in pool tournaments at the senior centers in Van Buren County.

“I got started when I was young,” Tucker said. “My dad ran a pool hall in Shirley.”

It wasn’t too rough of an environment for a kid, he said. There was no drinking, but there were a lot of men smoking or chewing tobacco.

“We had an old wood-burning stove that had a rack built around it filled with sand, and you’d spit in it and put your cigar in it,” he said.

In his “younger years,” Tucker said, he sometimes played pool for money.

Jack Lewis of Clinton, a retired district judge, said he’s been playing pool for about 30 years, but he maintained that he’s still not that good. The best pool player “varies,” he said.

“We have tournaments here, sometimes over in Scotland,” Lewis said.

Michael Draeger of Bee Branch said he enjoys playing at the Clinton Senior Center, although he doesn’t play every day like some of his cohorts. His wife, Pamala Draeger, is coordinator of five Van Buren County senior centers.

“It’s a game against yourself,” Michael Draeger said. “You’re playing against other people, but you have to have the skills to play, so it makes it very interesting. The senior centers get together, and we shoot pool tournaments, so that’s pretty neat.”

Jerry Blackwell, who also plays in the tournaments, said, “I’ve played all my life, but I’m still not good.”

Tucker took a break from an intense domino game to shoot pool.

The players are proud of the Clinton Senior Center’s new pool table. Pamala Draeger said the $2,400 table was purchased with a state grant that could be used to purchase anything for “socialization.”

“The one they had was unbalanced, not level anymore, and falling

Michael Draeger said the new table has made “a big difference” and has attracted more players to the game.

“It’s a good table,” Tucker said. What makes it good? He tapped one finger on the silver plate engraved with the company name, Brunswick Contender. “That right there.”

Tucker said he won the first eight-ball tournament on the new table, but he hasn’t won a tournament since. He said the secret to being a good pool player is to “be able to see and have steady nerves.”

Tucker, who plays pool just about every day at the Clinton center, said he has never owned his own stick. “I play with the house stick,” he said.

Draeger said pool is a good activity for the senior citizens, including himself.

“It keeps the seniors involved in doing something, so it’s really pretty nice.”