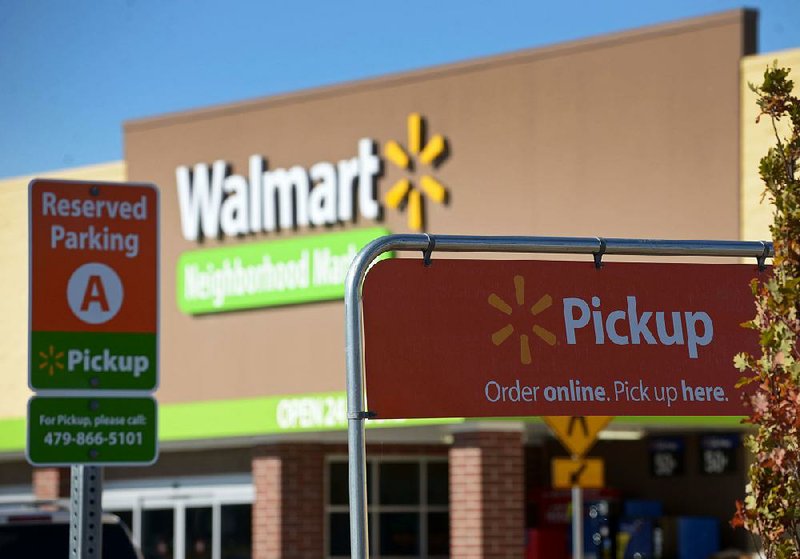 Customers have been using similar services in the retailer's U.K. Asda grocery-store chain for 15 years. No other grocer has Wal-Mart's reach, with 4,500-plus stores, and executives view grocery home shopping as a competitive edge.

So what is keeping Wal-Mart from offering the service all at once? Why not flip the switch on grocery home shopping, considering the Bentonville company boasts that two-thirds of the U.S. population sits within 5 miles of one of its locations?

"Customers tell us when they're ready or not," Madeira said. "Grocery, we've been experimenting with grocery home shopping for a long time. Now we see customers really asking us for more. They want to see these things in their cities. As customers are ready, we can accelerate."

Shoppers in a handful of markets across the U.S. have acted as guinea pigs for pickup, and in some cases delivery, since 2011. Wal-Mart announced in September that it was adding five additional pickup locations in Northwest Arkansas and later announced it was finished with its testing phase and added another 10 markets with 20 more planned for early 2016.

Pickup does require capital investment. What amounts to drive-thru lanes are being built at stores to accommodate shoppers. Wal-Mart also is designating employees to handle shopping for customers after an order is placed online.

Fayetteville-based retail research firm Field Agent described the grocery and convenience item market as being worth as much as $1 trillion for retailers in a survey titled "Grocery 2.0." More than 70 percent of customers surveyed were interested in grocery home shopping.

Customers have been slow to embrace the idea of having someone else pick out their groceries, particularly meat and produce. But they seem to be growing more comfortable with the concept, said Benny Boveda, a San Jose State University professor with 42 years of retail experience at Target and Montgomery Ward.

"Groceries are the next step," Boveda said. "Customers have gotten pretty comfortable with the idea of e-commerce. Retailers have tremendous leverage with their buying power and can provide, in many cases, much better pricing. Why not extend that to grocery as well? As long as they can maintain quality and freshness, why not? It has real growth potential in high-density areas."

Much of Wal-Mart's early testing began in cities such as Denver, Phoenix and San Jose, Calif. Tests also included Bentonville and Huntsville, Ala. New markets range in population from 5.5 million in Atlanta to about 60,000 in Rogers.

Wal-Mart Global e-commerce CEO Neil Ashe, like Madeira, said the retailer is being patient with widespread implementation because it doesn't want to get ahead of customers. Now that shoppers are becoming more comfortable with the idea of ordering groceries online, he believes Wal-Mart is poised for a breakthrough.

"If you look at the categories the customer has adopted to shop online, grocery is the last one," Ashe said from his office in San Bruno, Calif. "Incidentally, it's the biggest category. We've been treading a balance between when the customer is ready and when we're ready. It is a hard business to get right. But it steers well to our strengths: the relationship with the customer, the physical infrastructure and executing at scale. We feel really good about where we can take that. No one else has 4,500 locations around the country and the ability to scale that."