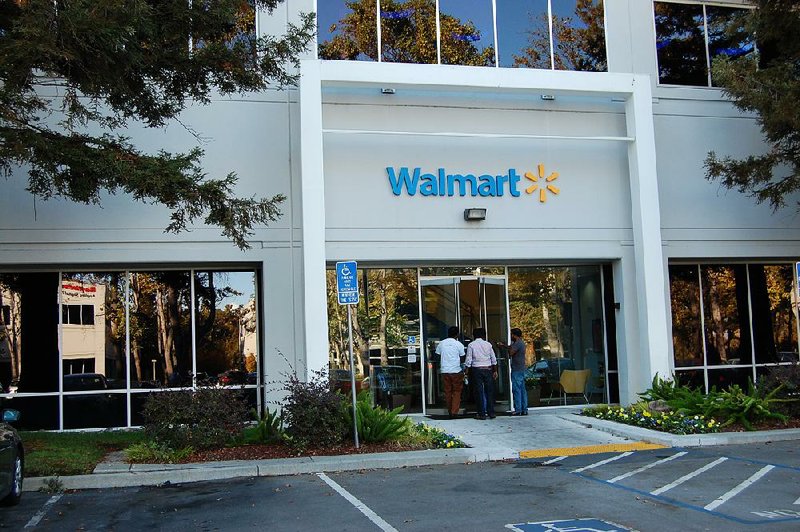 More than 3,600 people are employed worldwide by Wal-Mart’s e-commerce division, including about 3,000 in the Silicon Valley. They populate several offices in California, including this building in Sunnyvale.

SAN BRUNO, Calif. -- Wal-Mart Stores Inc. will spend up to $1.5 billion this year on its Global e-Commerce Division as the company looks to create a shopping experience that will keep customers from filling their digital and physical shopping carts elsewhere.

It's a hefty investment that comes as the world's largest retailer continues to scale down the pace and size with which it is building stores. The expense comes with the promise of innovation and a guarantee that mistakes will be made.

Embracing failure is a way of life in Silicon Valley, where Wal-Mart's online operation is headquartered. Failures happen and restarts are necessary, a reality that the company's home office, more than 1,800 miles away, has learned to accept from its e-commerce division.

Since relaunching its worldwide Internet operations as a unified Global e-Commerce Division in 2012, the company has, in a number of ways, come to more closely resemble the innovative technology companies that populate Silicon Valley, a cluster of towns south of San Francisco.

Described as "the idea incubator for the world's largest global retailer," @WalMartLabs has been responsible for re-platforming the technology behind Walmart.com, continually improving the retailer's mobile app, simplifying the shopping experience and helping drive double-digit sales growth online.

Wal-Mart has invested billions over that time into its Global e-Commerce operations, building what Ashe describes as a "technology company inside the world's largest retailer." During this fiscal year the company is expected to invest up to $1.5 billion in e-commerce.

More than 3,600 people are employed worldwide by the e-commerce division, including about 3,000 in the Silicon Valley. They populate offices in San Bruno, a town of 41,000 where YouTube is headquartered, and Sunnyvale, a town of 140,000 that is home to Yahoo and Lockheed Martin.

"This is the mecca of talent for software engineers, programmers, technology engineers," said Benny Boveda, a San Jose State University professor and 42-year veteran of retail. "You'd think with today's technology you could do it anywhere, but the talent is here. If you want wine, you go to Napa. If you want fashion, it's in New York. You want tech talent, it's in the Valley."

Hiring that talent and building the innovation and technology hub for Wal-Mart is a commitment that investors haven't always met with patience and understanding.

After a presentation last month in which Wal-Mart executives said they were expecting flat growth for fiscal 2016, and as much as a 12 percent decline in earnings per share for fiscal 2017, stock prices dropped more than 10 percent.

Concern over e-commerce investments, a commitment to raise employee wages by more than $1 billion in 2015 and 2016, and sluggish in-store sales led to the stock falling more than 35 percent over the past year.

Ongoing annual e-commerce investments of nearly $1 billion through fiscal 2018 come with scrutiny from Wall Street. But they are viewed as necessary for Wal-Mart to compete, said Joelle Kaufman, a Silicon Valley veteran and head of marketing and partnerships for BloomReach, a data analytics and digital marketing company for online retailers.

Clients working with BloomReach represent about 20 percent of U.S. e-commerce revenue, according to the company.

"You have to be willing to endure the street saying, 'You're putting $1 billion into what?," Kaufman said. "The type of money it takes, just to retain the top talent here, it's a very expensive investment. There aren't a lot of companies that can do it."

Wal-Mart opened an e-commerce headquarters in Silicon Valley about 15 years ago. It existed with little fanfare and without much innovation until 2011 when the retailer began a series of acquisitions that helped shape the culture and vision of what Global e-Commerce has become.

Ashe said CEO Doug McMillon, former CEO Mike Duke and the Wal-Mart board of directors have been fully supportive of the new direction of Global e-Commerce. That has included the hiring of top data scientists and programmers, and a willingness to let @WalmartLabs take on work that might seem out of the ordinary for a traditional brick-and-mortar retailer.

There have been short-lived projects like Shopycat, the program designed to help identify gifts that Facebook friends might like, or Goodies Co., a monthly subscription food delivery service. Earlier this year Wal-Mart began offering a beauty box subscription service.

All of the work done by @WalmartLabs and Global e-Commerce is intended, Ashe said, to "continue expanding the digital relationships with our customers."

At any given moment Wal-Mart is conducting hundreds of tests related to its e-commerce business. Sometimes the tests look like grocery home shopping options in cities across the U.S. Other times they take on the form of A/B testing, a process involving something as minor as changing the fonts or colors that greet Walmart.com users.

With its headquarters in Arkansas, 3,000-plus employees in California and 2.2 million worldwide, Wal-Mart doesn't fit the profile of a typical Silicon Valley success story. It isn't a startup that's fat on venture capitalist funding and isn't a homegrown garage-to-global giant success story like Apple, Google or the grandfather of them all, Hewlett-Packard.

Still, Stanford University's Silicon Valley historian and author Leslie Berlin said Wal-Mart can fit into the region by being perpetually willing to innovate. An openness to testing is critical to creating an environment where talented people want to work.

That, Berlin said, defines Silicon Valley culture above anything else.

"I could talk to you about dressing casually and flat organizational structures, but that isn't the linchpin of Silicon Valley culture," Berlin said. "It's the idea people describe as 'Living in Beta.' You don't sit around in a conference room and debate which banner ad is going to be most appealing. You put them all out there and then see what data comes in. It's a huge culture shift and it's really a function of software. You can throw it all out into the world and tweak it with just a few keystrokes. You don't have to go to the world with a single answer."

Wal-Mart is seeing progress and thinks it has an answer for growing its sales through technology.

Those online numbers are dwarfed by the retailer's $487 billion in annual sales or Amazon.com's $89 billion, but they don't provide an accurate measure of how big the online operation is.

Wal-Mart's Global e-Commerce -- which includes Samsclub.com, Walmart.com and 10 international sites -- would rank among the top 40 retailers in the U.S. if it were a stand-alone business. With nearly $13 billion in online sales the retailer ranks ahead of AT&T Wireless, J.C. Penney, Bed Bath & Beyond and Starbucks in annual revenue.

Where Wal-Mart thinks it can beat its brick-and-mortar competitors like Target or pure e-commerce operations like Amazon is in blending the two shopping experiences. Executives have spoken frequently, including at an investor conference last month, of maximizing its combination of digital and physical assets.

"I do think it's a mistake to try to out-Amazon, Amazon," Kaufman said. "I don't think it's a smart play to try to beat Amazon at Amazon's game. Know who you are, play your game."

Wal-Mart is counting on winning the game for multichannel shoppers.

McMillon noted in last month's meeting with investors that in-store-only customers spend an average of $1,400 a year, and online-only shoppers spend an average of $200 annually. Shoppers who are spending money online and in stores are spending $2,500 a year on average, leading McMillon to say Wal-Mart will "win on our unique combination of assets."

Mobile devices are viewed as the best way to maximize those assets. Wal-Mart's internal data suggest that nearly 80 percent of purchases in its stores are influenced by mobile devices through actions like searching prices or availability online.

Wal-Mart has put much of its efforts into improving its mobile app experience. The retailer expects 210 million visits to the app between the beginning of November and the end of December.

"The smartphone is the bridge," Walmart.com president and CEO Fernando Madeira said. "It will be the tool in terms of how our customers shop in the store and online."

What's next for Wal-Mart in the quest to innovate and impress shoppers is closely guarded information around the @WalmartLabs offices. Specifics are hard to come by, but it is clear that the retailer is working to improve communication between customers and the stores in which they shop.

By the end of the year, Wal-Mart is planning to test Walmart Simple Text, a program that allows shoppers to text questions to the store. A shopper looking for toothpicks, for example, would text 'toothpicks' and then receive information on where the items are located.

The idea was submitted by a team during a coding event at TechCrunch's #HackDisrupt. More than 600 people participated in what is one of the Silicon Valley's many events aimed at encouraging collaboration and innovation.

Technology has changed the shopping experiences in ways that Wal-Mart founder Sam Walton couldn't have dreamed. Even so, Ashe said, the company is still operating in a way that Walton would appreciate. Walton's mission to save customers money is at the heart of everything @WalmartLabs and Global e-Commerce are doing.

McMillon and Ashe speak of making Wal-Mart as relevant for the next 50 years as it was for the previous 53.

"What the Internet has brought to society over the last 15 years, compared to what Sam Walton did, they're not dissimilar," Ashe said. "It's about democratizing access, eliminating arbitrages and inefficiencies, and creating significant efficiencies that you give back to customers in the form of price. That's what the Internet demands now. That's what, you know, a guy in Arkansas began doing 50 something years ago. The ethos of Wal-Mart and the context of the consumer Internet are very aligned."