Loewen out with broken foot 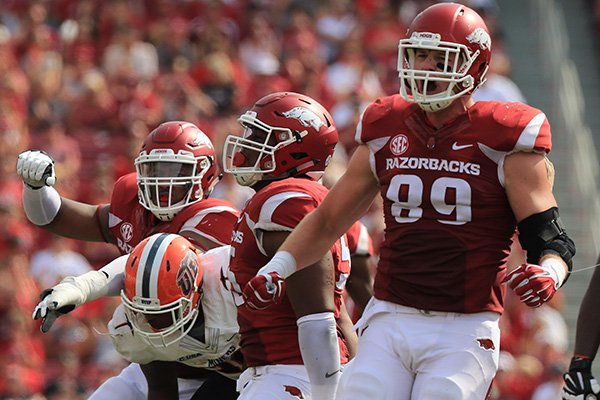 Arkansas' Mitchell Loewen (89) celebrates after making a tackle during a game against UPEP on Saturday, Sept. 5, 2015, at Razorback Stadium in Fayetteville.

FAYETTEVILLE — Arkansas defensive lineman Mitchell Loewen will miss the remainder of the season after suffering a broken foot Saturday at LSU.

Loewen is scheduled to undergo surgery Monday to repair the injury. Loewen, a senior, will not play again for the Razorbacks.

Loewen played in 10 games and recorded 15 tackles for the Razorbacks this season. He also had 1.5 sacks.

Arkansas coach Bret Bielema said Loewen is the 10th player to break a bone this year for Arkansas. Bielema said last month that Loewen has been scouted this season by NFL teams.