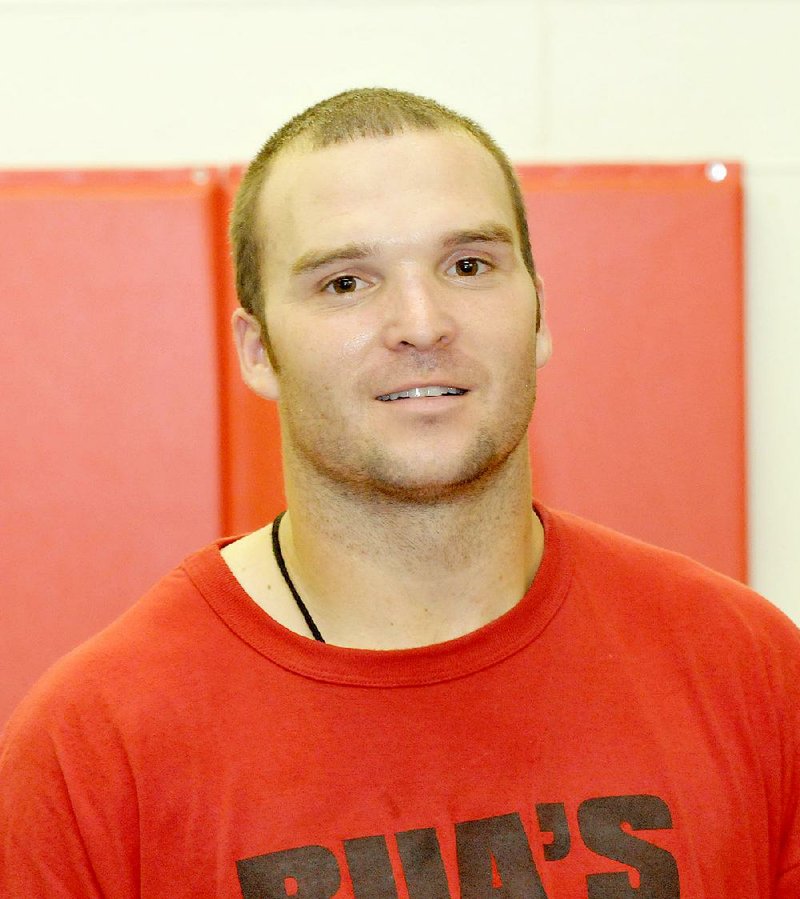 Tony Bua is shown in this photo.

He and teammate Caleb Miller found the mother of Ken Hamlin, Arkansas' All-American safety, and she agreed to give the players a ride to the game, which Bua said was a 40-minute trip. However, there was heavy traffic that day in Columbia, S.C., and Bua wasn't sure if he would make it on time.

Then Bua found a police officer, who gave he and Miller a ride.

Arkansas beat South Carolina 23-0, providing one of many positive memories of his time with the Razorbacks for Bua, who spoke Monday afternoon at the Little Rock Touchdown Club's luncheon at the Embassy Suites in Little Rock.

Bua, 35, played linebacker and safety at Arkansas in 1999-2003 for Houston Nutt. He started 39 of 48 games for the Razorbacks, recording 408 tackles, including 243 unassisted, 6 sacks, 6 interceptions, 14 pass breakups, 5 forced fumbles and 5 fumble recoveries.

Bua, who was an all-state linebacker at John Curtis High School in River Ridge, La., credited Nutt for believing in him.

"Life is a lot about timing," Bua said. "It's about being at the right place at the right time. Coach Nutt gave me my shot and I am forever grateful."

As a senior in 2003, Bua was a defensive co-captain and was second on the team in tackles with 126, including 75 unassisted, as Arkansas went on to beat Missouri in the Independence Bowl.

The Miami Dolphins drafted Bua in the fifth round of the 2004 NFL Draft and he played one season with the team before being released. He was on the practice squad for the Dallas Cowboys and Cincinnati Bengals in 2005 and 2006, but never played. Bua then joined the CFL's Calgary Stampeders in 2007.

He owns Bua's Next Level Roofing, which is based in Lucas, Texas, near Dallas. The company also has offices in Bryant and Fayetteville. Bua said he was inspired by his father, who owned a construction company in Louisiana.

"I felt like it was something I was good at," Bua said. "So I just dove into it."

Bua, who played in four bowl games at Arkansas, said he's been pleased with the 2015 Razorbacks, who became bowl eligible last Saturday night with a 31-14 victory at LSU.

"We're a young team," Bua said. "Every play is precious. Every win is precious. I felt like at the beginning of the year, they bought into the hype.

"I think Coach [Bret] Bielema has done a great job of keeping them together. There is no quit in the Razorbacks. Win or lose, a team knows they played a heck of a game against us."

Bua is married to Taylor and he has a 2-year-old son, Blaze. He wanted to name his son Anthony Joseph Bua IV, but his wife had other ideas.

"My wife and I came to an agreement," Bua said. "I told her if she could find any names that I would like, I'd be willing to change. We came up with Blaze, and it stuck."