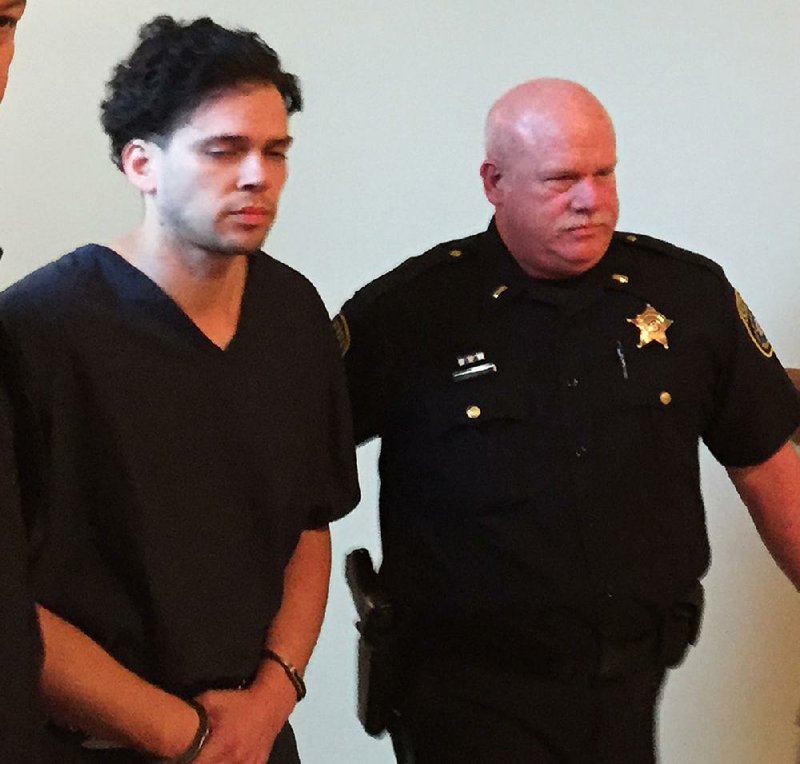 Arron Lewis is escorted into the Pulaski County Courthouse on Nov. 16, 2015, for a hearing on motions to quash evidence in the kidnapping and capital murder case against him. Lewis is accused of abducting and killing real estate agent Beverly Carter last year.

The man accused of abducting and killing real estate agent Beverly Carter bargained with authorities when he was arrested, promising to confess to her kidnapping if they would guarantee he would be charged in federal court, not state court, according to secretly taped recordings played for a Pulaski County circuit judge Monday.

Carter was still alive but the clock was ticking, Arron Michael Lewis told sheriff's deputies after his arrest in September 2014, four days after the 50-year-old mother of three vanished. Carter, of Scott, had told her husband that she was going to show an England house to a potential buyer.

Lewis said he was holding Carter for ransom, but he also told investigators he liked the media attention her kidnapping had produced.

"The whole thing is about money," Lewis said on the recording. "I come out with a little bit of fame ... a hot second of fame."

Those statements were made in interviews with Lewis that deputies secretly recorded because he had refused to be taped until he could guarantee that he would be prosecuted in federal court.

He said he would tell investigators where Carter was only after he was assured he would serve his sentence in a federal penitentiary, which he prefers to Arkansas prisons.

Charged with capital murder and kidnapping, he faces a life sentence in state prison.

“I’ll give you completely what you want, but this ain’t going state, it’s going fed. I’m going away for a long f•••••• time.”The recordings were played for Judge Herb Wright during a seven-hour evidentiary hearing for the judge to decide whether a jury will hear those interviews and see evidence collected from Lewis' home and car.

Defense attorneys Bill James and Lee Short have challenged the legality of the evidence collection. They also dispute that Lewis was properly informed of his constitutional right to have legal representation.

Also pending before the judge is whether Lewis can invoke marital privilege to keep his wife, Crystal Hope Lowery, from testifying against him.

The 42-year-old Lowery accepted a 30-year prison sentence for kidnapping and first-degree murder for her role in Carter's slaying, with the provision that she cooperate with prosecutors.

Wright said he would accept written arguments on the issues from the sides, then rule by the middle of next month. Lewis' trial is set for Jan. 12.

To show deputies he was serious, Lewis played a recording from his cellphone of Carter begging for her husband, Carl Carter, to comply with Lewis' demands for money without involving police.

"Carl, it's Beverly. I just want to let you know I'm OK. I haven't been hurt. Just do what he says and please don't call the police," Beverly Carter's voice is heard on the recording. "If you call the police, it could be bad. Just want you to know that I love you very much."

Lewis repeatedly reminded Allison that time was running out for Carter.

"Are you guaranteeing me this woman's alive?" Allison asked.

"Depending on how long it takes. How long can a person survive without food and water since yesterday? You'll figure it out," Lewis responded.

Allison testified that Lewis eventually promised to direct deputies to one of two locations where Carter could be.

Lewis said she was being guarded by a friend of his in exchange for a $25,000 share of the $100,000 ransom that Lewis hoped to collect through a series of bank transfers, Allison said.

Lewis, riding with deputies, directed the investigators to a shed in Lonoke County, then a house near Haskell where Carter was supposed to be handcuffed and chained to a wall, the investigator said.

Both were empty with no sign of recent habitation, he said.

Lewis said his accomplice must have moved Carter, Allison told the judge.

Allison said deputies were able to clear that supposed accomplice of any involvement.

During the drive, Lewis told deputies how he had chosen Carter to be kidnapped for ransom after seeing her on an Internet advertisement and realizing she worked alone.

He arranged the appointment to see the house, and Carter was inside when he got there, he told investigators.

Lewis said he told Carter, "You're about to have a very bad day" before subduing her and binding her with green duct tape, the investigator said.

Lewis said he put the bound woman in his car and left the house, Allison testified.

Allison said he confronted Lewis about the "wild goose chase" but that the defendant's demeanor changed when the investigator asked whether Lewis had taken Carter to the concrete company where Lewis used to work.

Lewis told the deputy he had put Carter in a cement mixer on the company grounds and asked for his lawyer, Allison said, which forced him to stop questioning.

Authorities found Carter buried on the premises near Cabot shortly after midnight Sept. 29, 2014, and Lewis was subsequently charged with kidnapping and capital murder.

The judge also got to hear from Lewis directly, as the defendant testified that investigators repeatedly ignored his requests for a lawyer.

As Monday's hearing ended, chief deputy prosecutor John Johnson told the judge he had gotten word from the state Crime Laboratory that hair found in the trunk of Lewis' car had been matched to Carter "within all scientific certainty."