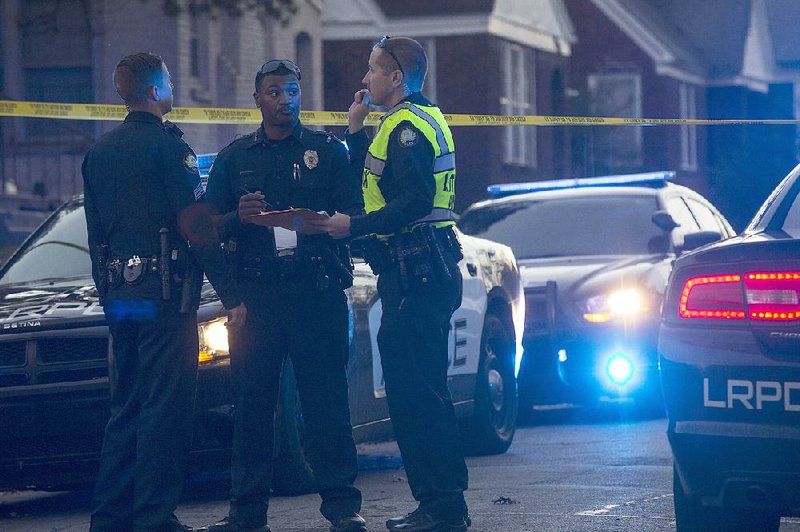 Little Rock police officers investigate the shooting of a 6-year-old boy at 3400 Lamar St. late Wednesday afternoon in Little Rock. The child, who police did not identify, died a short time later at Arkansas Children’s Hospital.

A 6-year-old boy died Wednesday after he was shot in Little Rock, and his aunt was later charged with manslaughter, police said.

The shooting came a day after a 2-year-old boy died after being shot in Benton.

Little Rock police were called to 3401 Lamar St. at 4:11 p.m. Wednesday, spokesman Lt. Steven McClanahan said. When officers arrived they found Kenya Brevard, 38, yelling and crying while standing over the 6-year-old, who appeared to have been shot in the face, according to a police report.

The child, whom police did not identify, was taken to Arkansas Children's Hospital in serious condition, and he later died, McClanahan said.

McClanahan said the shooting appeared "to be accidental in nature," but Brevard was arrested Wednesday night on a manslaughter charge. Manslaughter, a Class C felony punishable by a prison term of three to 10 years, is applicable when a person recklessly or negligently causes the death of another, according to Arkansas Code 5-10-104.

According to the police report, a black handgun was found on the ground next to the rear passenger door of a 2004 Buick Rendezvous parked along the street.

Brevard told police she had arrived at the home about 10 minutes before the 911 call. She and another child got out of the car, but the 6-year-old stayed, telling Brevard he would wait for them to return, the report said.

Brevard said she did not see or hear anyone around the SUV. The child who had exited the car told police she was in the backyard of the Lamar Street house feeding a dog when she heard her mother crying and yelling. She saw her mom standing over the boy when she went to the front yard.

In Benton, police were continuing an investigation into the fatal shooting of a 2-year-old boy Tuesday.

Police spokesman Lt. Kevin Russell said detectives had interviewed the child's parents and "numerous other individuals" and were also speaking to the Arkansas Department of Human services to determine "issues that might have been present in the home."

The toddler died Tuesday at a Little Rock hospital after being shot about 1:35 p.m. on Nelson Court off Edison Avenue in Benton, according to police. His identity has not been released.

Pulaski County Coroner Gerone Hobbs declined to name the boy or discuss his injuries. He referred questions to Benton police.

Russell said police were still working to determine the circumstances of the shooting. The boy's body was taken to the state Crime Laboratory in Little Rock for autopsy.

"We won't be certain [of the circumstances] until we get all the results," Russell said.

No charges had been filed Wednesday.

Information for this report was contributed by Arkansas Online staff members.