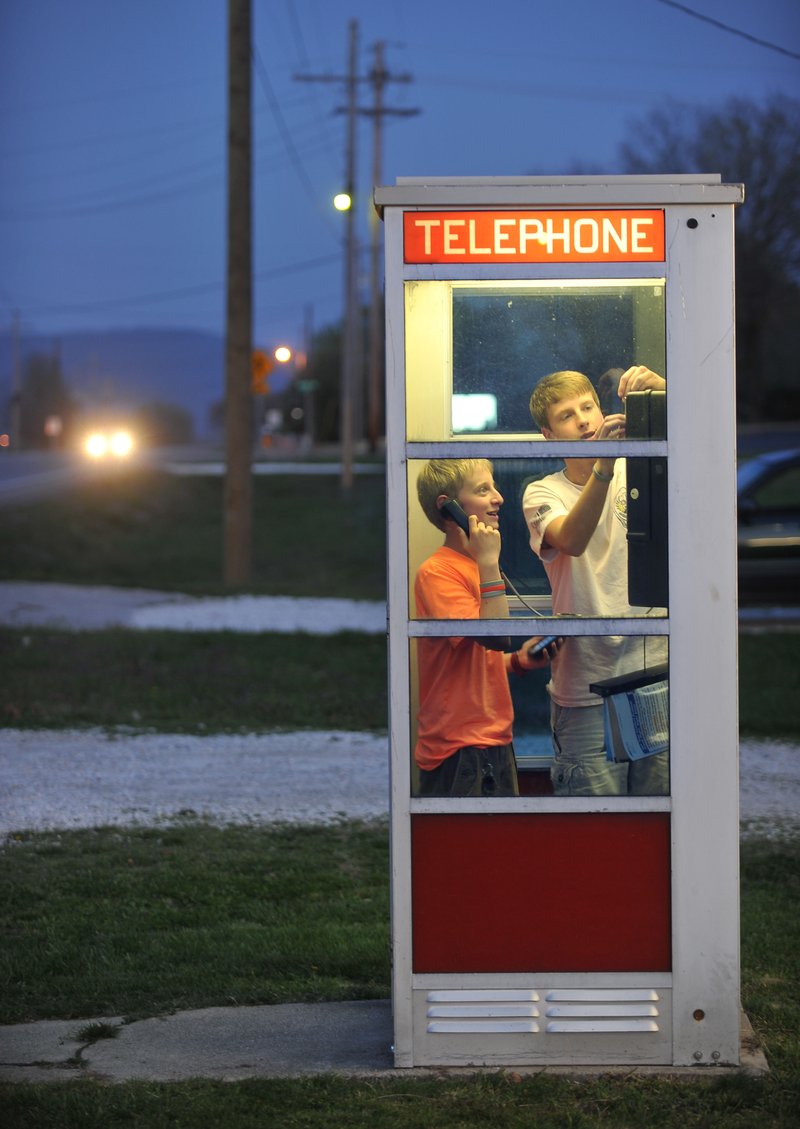 Prairie Grove teenagers Mason McCourt (left) and Blake Williams use the telephone booth on U.S. 62 in Prairie Grove in April, when the booth was first nominated to the National Register of Historic Places.

A telephone booth in Prairie Grove has become the first structure of its kind to be listed on the National Register of Historic Places. 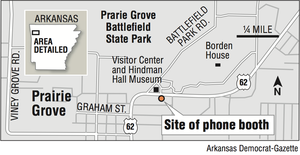 Photo by Arkansas Democrat-Gazette
A map showing the site of a phone booth in Prairie Grove.

The 56-year-old Airlight outdoor booth was selected for nomination in April by the state review board of the Arkansas Historic Preservation Program.

But there was a hang-up.

The National Park Service had reservations about putting a phone booth on the list, said Ralph Wilcox, the National Register/survey coordinator for the state's Historic Preservation Program. It had never been done before.

The "listing blurs the line between a 'place' and an artifact, and it begs the questions about where the line between significance and nostalgia is drawn," according to the response that the National Register sent to Wilcox in July.

Wilcox had to convince the decision-makers that the phone booth is "truly significant."

He resubmitted the nomination, emphasizing that the Airlight "represented a new and advanced design for the telephone booth."

For one thing, it was intended to be outdoors.

Before the Airlight was developed in 1954, telephone booths were made of wood and were inside buildings, Wilcox wrote.

The Airlight's metal-and-glass construction could hold up to the elements, he said. And this booth was strategically placed to serve the motoring public -- on U.S. 62 in front of the Colonial Motel and across from the entrance of Prairie Grove Battlefield State Park.

With that ringing recommendation, the phone booth was officially listed on the National Register on Nov. 9.

"It is my understanding that this is the first and only telephone booth listed on the National Register," Wilcox said Thursday.

Airlight phone booths were once common along highways across America.

According to the nomination form, there were 2.6 million pay phones in the United States by 1996.

But, while pay phones still exist, phone booths have become harder to find since cellular phones took over the market.

The Prairie Grove phone booth is rare in Arkansas because it has a working telephone, Wilcox said. The only other one in the state that he knows of is in Bluffton in Yell County, where there's no cellphone service.

David Parks, president of Prairie Grove Telephone Co., said he's not sure when the company put the phone booth in, but he believes it was around 1959.

"I'm happy," Parks said. "It's just a little hard to believe. I mean, who would have thought? I'm tickled. I really am."

Parks said there are no plans for a plaque outside the phone booth.

Parks said he thought about removing the phone booth years ago but decided to leave it up for nostalgia's sake. He said it yields $3 to $4 in change per year.

Patrick Andrus, a historian who has been with the National Register for 35 years, told the Arkansas Democrat-Gazette in April that the Prairie Grove submission was the first nomination that he knew of for a telephone booth.

Generally, properties must be at least 50 years old to be listed on the National Register, which is administered by the National Park Service.

Telephone booths were part of American culture throughout the 20th century. Countless villains and heroes ducked into phone booths as movie plots unfolded.

A mild-mannered reporter could enter a phone booth and emerge as Superman. A telephone booth even saved Tippi Hedren from avian attackers in Alfred Hitchcock's 1963 movie The Birds.

Whether the Prairie Grove phone booth has ever served such a purpose isn't known, but it is an "excellent example" of the aluminum-and-glass phone booths that were developed for Bell Telephone System in 1954, according to the National Register nomination form.

It was also nominated for its "importance in the communications history of Prairie Grove."

Airlight phone booths were used for decades. Each booth had a red panel at the top of all four sides, with the word "TELEPHONE" in white letters.

The telephone is in one corner, and the booth has a "bifold door."

"Its aluminum and glass construction was durable enough to stand up to the elements and the amount of glass along with the louvers on the sides allowed its namesake elements -- air and light -- to flood the booth," according to the nomination form. The Airlight booths also had fluorescent overhead lights.

The phone booth is a tourist attraction on U.S. 62 across from Prairie Grove Battlefield State Park.

People often stop at the booth to take pictures.

In June 2014, a motorist driving a 2003 Chevrolet Tahoe dozed off and ran into the Prairie Grove booth, knocking it from its concrete foundation in front of the Colonial Motel.

A public outcry on the city's Facebook page led Parks to fix it. The phone booth was repaired and reinstalled that August.