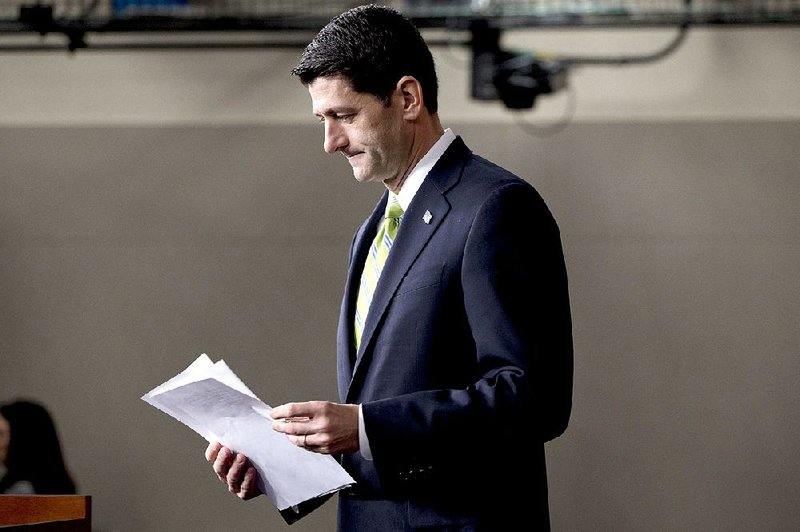 House Speaker Paul Ryan said Thursday about the proposal on Syrian refugees, “It just is common sense that we pause, re-evaluate and make sure that … something like what happened in Paris doesn’t happen here.”

WASHINGTON -- Responding swiftly to terrorism in Paris, the U.S. House voted overwhelmingly Thursday to erect high hurdles for Syrian and Iraqi refugees coming to American shores, dividing the president's own party as lawmakers reflected the anxiety of voters back home.

The vote was 289-137, enough to override a threatened White House veto of the legislation, which was hurriedly drafted under new House Speaker Paul Ryan, R-Wis., in response to the carnage in the streets of Paris.

The bill would require new FBI background checks and individual sign-offs from the director of the FBI, the secretary of the Department of Homeland Security and the director of national intelligence before any refugee could come to the U.S. from Iraq or Syria, where the Islamic State extremist group that has claimed credit for the Paris attacks has flourished.

"Our duty is to protect the American people," said Rep. Kevin McCarthy of California, the majority leader. The House measure, he said, "increases the standards to keep those who want to do us harm out."

Republicans said it was simply prudent to place new controls on the refugee system, without ending it entirely or requiring religious tests as some in the GOP have demanded.

"This is an urgent matter and that is why we're dealing with this urgently," Ryan said. "It just is common sense that we pause, re-evaluate and make sure that we have the proper standards in place to make sure something like what happened in Paris doesn't happen here."

Ryan said he has discussed the House bill with Senate Majority Leader Mitch McConnell, R-Ky., but wouldn't elaborate. McConnell said on the Senate floor Thursday that "it's clear the American people are concerned about the administration's ability to properly vet thousands of individuals from Syria."

The vote in the House preceded debate on the bill in the Senate, which is expected to take up the measure after the Thanksgiving recess. John Cornyn of Texas, the No. 2 Senate Republican, said he would like to see the chamber take up the House legislation as is.

Senate Democrats are trying to shift the focus to other issues regarding travelers from overseas, and Minority Leader Harry Reid of Nevada predicted Thursday's bill would not be approved.

Traveling in Asia this week, Obama chided Congress and Republicans for yielding to "hysteria" and taking aim at "widows and orphans." The White House has threatened a presidential veto, contending the legislation would bring to an end an already highly regulated refugee program while doing nothing to enhance national security.

Speaking after a meeting on Thursday with Justin Trudeau, Canada's new prime minister, Obama insisted that refugees already were subjected to "the most rigorous vetting process that we have for anybody who is admitted." He said the process of screening a potential refugee takes up to two years and includes background checks by the national counterterrorism center, the FBI and the Defense Department.

Refugees must pass a battery of screening requirements including interviews overseas, fingerprinting and biometric investigations. Many are women and children and only about 2 percent are single men of combat age.

"That somehow they pose a more significant threat than all the tourists who pour into the United States every single day just doesn't jive with reality," he said.

Josh Earnest, the president's spokesman, called the interest of governors and others to understand the process was "entirely legitimate."

Earnest said refugees applying for asylum undergo background checks that collect "biographic and biometric" information, and must submit to an in-person interview.

He said the information is screened by international law enforcement agencies like Interpol in addition to U.S. intelligence agencies.

Benjamin Rhodes, Obama's deputy national security adviser, said he doubted that Islamic State terrorists would risk going through that two-year process to enter the United States. But Obama and his aides also hinted that they had been caught off guard by the uproar over refugees.

Obama has said he wants the U.S. to admit 10,000 Syrian refugees in the fiscal year that began Oct. 1. The U.S. welcomed 1,682 Syrians in fiscal 2015, said Simon Henshaw, the State Department's principal deputy assistant for refugees and migration.

"Measured against more than 4 million Syrian refugees currently hosted in the Middle East, this is a modest but an important contribution to the global effort" to help Syrian refugees, Henshaw said.

Many Democrats tried to support Obama and his program on the House floor. "We must keep in mind that our nation was founded by immigrants and has historically welcomed refugees when there is suffering around the globe," said Rep. John Conyers of Michigan, the highest-ranking Democrat on the House Judiciary committee.

"Rather than shutting our doors to these desperate men, women and children who are risking their lives to escape death and torture in their homelands, we should work to utilize our immense resources and good intentions of our citizens to welcome them," he said.

And other Democrats complained that the measure would mar the United States' image as a welcoming haven for immigrants.

"We might as well take down the Statue of Liberty," Rep. Jerrold Nadler of New York asserted in debate on the House floor.

Yet some Democrats chafed at the White House position. Dozens joined Republicans in supporting the legislation, some fretting openly of being put in the politically untenable position of opposing a reasonable anti-terror bill in the wake of a tragedy.

Rep. Brad Ashford, D-Neb., called the Paris attacks "a game changer" and supported the bill, saying, "I cannot sit back and ignore the concerns of my constituents and the American public."

The White House dispatched Chief of Staff Denis McDonough and Homeland Security Secretary Jeh Johnson to Capitol Hill to meet with Democrats, but several lawmakers said their arguments were unconvincing.

Rep. Sean Patrick Maloney of New York got into a forceful exchange with Johnson at the private meeting, telling him Democrats could lose seats over the vote, according to aides in attendance. Maloney ended up voting with Republicans in support of the legislation.

The House bill would increase the FBI's role by making it responsible for a "thorough background investigation" on each refugee. The homeland security secretary would subsequently have to certify, with the concurrence of the FBI director and the director of national intelligence, that the refugee posed no security concerns. Under the current system the homeland security secretary has the final say, though multiple other agencies are involved.

On his way out of the meeting with Democrats on Thursday, Johnson said the House measure was "a bad bill because it seeks to micromanage the process in a way that is counterproductive to national security, to our humanitarian obligations and to the overall ability of us to focus on homeland security."

Defenders of the bill, including some Democrats, described the changes as fairly modest. Still, advocacy groups warned that refugees could be left to languish while the new changes are put into place, and Catholic bishops and others announced their opposition.

Information for this article was contributed by Erica Werner, Alan Fram, Andrew Taylor and Matthew Daly of The Associated Press; by Jennifer Steinhauer and Michael D. Shear of The New York Times; and by Billy House, Kathleen Miller and Nicole Gaouette of Bloomberg News.