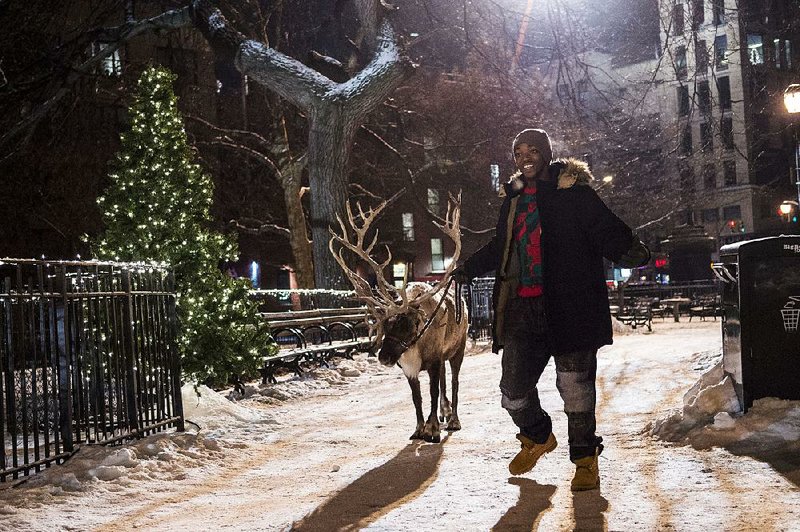 Chris (Anthony Mackie) is a rising NFL star who reunites with two lifelong friends on Christmas Eve in Jonathan Levine’s The Night Before.

During movies about debauchery, it's tempting to wonder a few things: 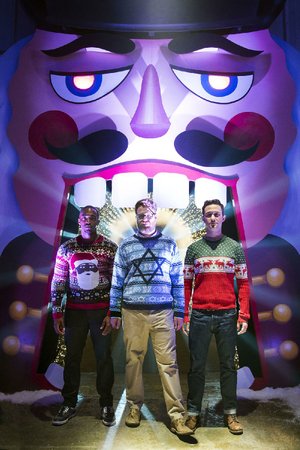 Three 30-something bros — Chris (Anthony Mackie), Isaac (Seth Rogen) and Ethan (Joseph-Gordon Levitt) — look to crash one last Christmas party before consigning themselves to adulthood in the stoner comedy The Night Before.

• Would it be more fun to be one of the inebriated characters instead of merely watching them?

Rating: R, for drug use and language throughout, some strong sexual content and graphic nudity

• Could the filmmakers be engaging in the same sort of chemistry experiments they're depicting onscreen?

• Would the movie have been better if everyone had either stayed sober a little longer or gotten even more loaded?

These questions are certainly relevant when watching The Night Before, which concerns a trio of 30-something besties who decide that Christmas Eve is a great time to hit something stronger than eggnog. Before you can say "Harold and Kumar," the three of them leave a trail of chaos that makes the rest of New York seem hung over.

While Ethan (Joseph Gordon-Levitt), Isaac (Seth Rogen) and Chris (Anthony Mackie) have helped one another get through a series of Noels with a little help from their pharmaceutical friends, Ethan is morose because their annual bacchanals are coming to an end. Isaac has a respectable white-collar job and pregnant wife named Betsy (Jillian Bell), while Chris is starting to reach the pinnacle of his NFL career at the age of 34. Because he lives on social media, Chris has to restrain his cravings for drugs, unless they're steroids.

Ethan needs these gatherings more than his pals because he doesn't have much to look forward to otherwise. His parents died when he was still young, and he has difficulty committing to a woman (Lizzy Caplan) he obviously loves.

His mood brightens when he steals some invitations to an elite soiree called the "Nutcracka Ball." Naturally, trouble is guaranteed to ensue because Chris has reserved a limo paid for by the makers of Red Bull and Betsy has rewarded Isaac's support of her through the pregnancy by giving him a stash of every known intoxicant. He has been dutiful all year, so what harm can come from falling off the wagon for a night?

There wouldn't be a movie if these guys somehow managed to behave themselves.

Rogen is an old hand at behaving like a stoned fool while still managing to keep enough of his wits about him to seem like something other than a loser. Isaac is Jewish, and Betsy is Catholic, so one can imagine the trouble he can get into when he staggers into midnight Mass at her church. It doesn't help that he's wearing a sweater with a Star of David larger than his own head, guaranteeing that he'll not be able to blend in with the faithful.

Director Jonathan Levine (Warm Bodies) and a team of co-screenwriters come up with a few bits of guilt-inducing holiday cheer. They may work blue, but there is something inspired about Michael Shannon's turn as a creepy but oddly philosophical weed merchant (appropriately named "Mr. Green").

While Levine and his partners in crime come up with their share of illicit delights, there's not enough story to counterbalance the potentially dangerous or regrettable fun. Levine, Gordon-Levitt and Rogen teamed up on the terrific 50/50, which successfully balanced the joys of medical cannabis with the very real risk of cancer. It was easy to identify with Levine's leading men in that film because their partying wasn't always about getting a simple buzz.

With The Night Before, Ethan's grief never feels authentic despite Gordon-Levitt's formidable acting chops. Unless viewers can share his sense of loss, following him is like spending time with a person who isn't that likable once whatever drug you've taken has worn off. Living as a responsible adult is a truly frightening experience, but viewers never get a sense that the three not-so-wise men are staring at an abyss.

Print Headline: The Night Before