12-year-old I-30 proposal more ambitious than current one 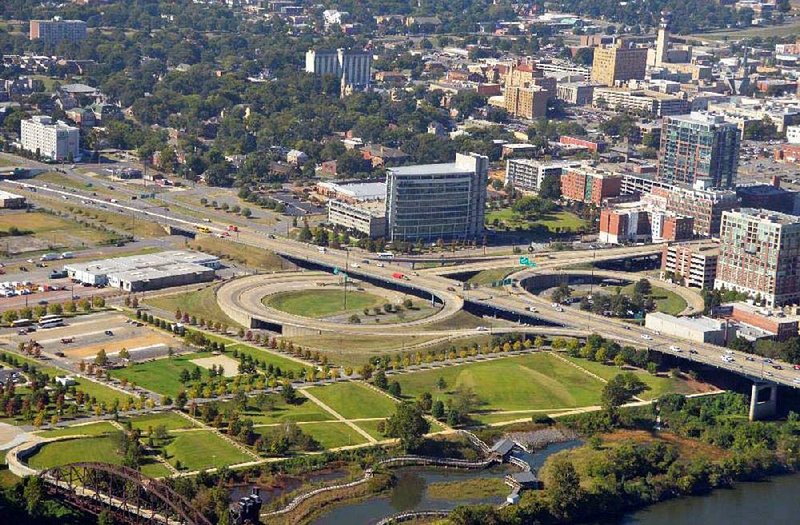 Special to the Arkansas Democrat-Gazette - 10-13-2015 - The Interstate 30 interchange serving downtown Little Rock as it looks today.

An Arkansas Highway and Transportation Department proposal to widen Interstate 30 through downtown Little Rock and North Little Rock to 10 lanes calls for a smaller highway than a study recommended a dozen years ago.

A 2003 study by the Louis Berger Group consulting firm, commissioned by the Highway Department and Metroplan, found that "a minimum of 10 through lanes (five lanes in each direction) would be required on I-30" between Interstate 630 in Little Rock and Interstate 40 in North Little Rock to provide an acceptable level of service in 2025 and beyond.

The study also called for an extra, or 11th, lane on the bridge over the Arkansas River to more safely collect and distribute vehicles getting on and off the interstate in downtowns of both cities in the eastbound side only.

The current proposal to improve the 6.7-mile corridor between Interstate 530 in Little Rock and Interstate 40 in North Little Rock calls for six lanes for most of the route and 10 lanes (including six through lanes and four collector/distributor lanes) through the downtown area.

"It was in there as a solution," Scott Bennett, the state's top highway official, said of the wider configuration of the earlier study during an interview last week. "I don't know that anything has changed since then."

The older study, which looked at the entire freeway system in central Arkansas, never was adopted by the board of directors of Metroplan, the long-range transportation planning agency for Pulaski, Faulkner, Saline and Lonoke counties. Its board is composed of the region's mayors and county judges.

Jim McKenzie, the executive director for Metroplan, downplayed the significance of the 2003 study.

"It doesn't matter what was recommended," he said in a separate interview, also last week. "It's simply a consultant's recommendation."

That the board didn't adopt the study "doesn't mean it isn't a good study," he said. "I guess it means it didn't match their policy.

"But it was just another study that was based on traffic volumes, traffic projections, safety analysis. It was another independent group; it was a consulting firm that came up with that idea of 10 lanes."

The Metroplan board has a longtime policy that limits freeways in a four-county region to six lanes until more money is invested in local highways and transit systems. The policy is in place to keep money available for other transportation projects.

The policy "accepts that there is going to be some level of congestion" that can be managed, McKenzie said, adding it was meant to encourage further development of the region's arterial network of non-interstates and regional transit.

Once that is accomplished, he said, then "you look at the freeways."

Because state road projects must adhere to Metroplan policies in order to be eligible for federal funding, an exception would have to be granted for the I-30 project. State highway officials say they are preparing an amendment, which likely will be ready after the first of the year, that would request that the project be made an exception. The decision on whether to grant the exception will be made by the Metroplan board.

State highway officials say the current project, which has been dubbed "30 Crossing," is necessary to ease congestion and increase safety in the 6. 7-mile corridor. The latest federally required planning phase, which will assess the environmental impact of the project and refine the interchanges and other elements of the corridor, also requires the department and its consultants to considering an eight-lane alternative.

The 2003 study was conducted for Metroplan and the Highway Department at a cost of $267,000, 80 percent of which was federal money, with the balance provided by the state. Its purpose was to recommend system improvements to the more-than-200-mile existing and committed freeway system in central Arkansas based on anticipated demands and needs for the next 25 years.

The study was among the documents the latest study used to help "re-engage the public and agencies in developing improvements within the study area to address these challenges" identified in previous studies. It called the Areawide Freeway study the "most relevant."

The latest study, called the planning and environmental linkage study, or PEL, found that the 2003 study evaluated six alternatives that included the need for another river crossing to go along with the I-30, Broadway and Main Street bridges.

The "study did not make any recommendations but made observations for each alternative regarding cost benefits, level of service and construction costs," the PEL study said. "The study observed that widening I-30 in a similar area of study would be necessary to provide acceptable operations for all Arkansas River crossings."

"The full widening of I-30 to five lanes in each direction is the only alternative that provides an acceptable [level of service] for all crossings," the 2003 study said.

But the same study also found that an alternative that includes adding a fourth crossing, though having the highest cost, would also have the highest benefits of all of the alternatives, although it wouldn't preclude improvements to the other crossings.

The Highway Department has said that a fourth crossing, identified in the 2003 study as the Pike Avenue crossing but more recently referred to as a crossing at Chester Street, isn't on the state highway system and would have to be paid for by local governments.