Score 50 and lose? Hogs cope with it 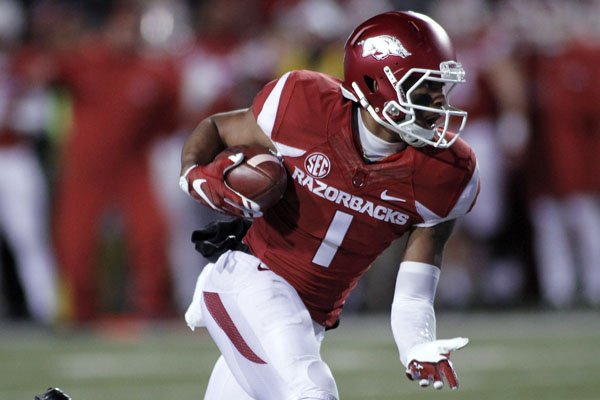 FAYETTEVILLE -- Arkansas scored more points against Mississippi State Saturday night than the Razorbacks' previous three games combined in the series and they still couldn't stop the Bulldogs from winning again.

Mississippi State held on for a 51-50 victory at Reynolds Razorback Stadium with a blocked field goal attempt in the final seconds that extended the Bulldogs' winning streak against Arkansas to four games.

"Our goal on offense is to score more than the other team," said Arkansas tight end Hunter Henry, who had 7 catches for 129 yards and 2 touchdowns. "Tonight we didn't."

"It sucks for all of us," Hunter said. "You work so hard and put so much time and effort into this, and to come up short, it's pretty tough."

Mississippi State has its longest winning streak against Arkansas and has cut the Razorbacks' advantage to 15-10-1 in a series they used to dominate.

"He's not one of the best quarterbacks in the country for no reason," Arkansas cornerback Kevin Richardson said. "He was really poised. He didn't let us affect him in any kind of way. He just came out and competed every play."

The defense struggled to stop Prescott, but the Razorbacks forced two turnovers in the third quarter -- an interception by Richardson and fumble forced by Deatrich Wise and recovered by Tawian Johnson -- that helped set up touchdowns that put Arkansas ahead 42-31.

"We were running on a high right there," Richardson said. "That pushed us to open our eyes that we could still come back and win the game.

"We've just got to finish better. I'm pretty sure we're going to emphasize that a lot this week and hopefully we execute it better."

The Razorbacks close the regular season against Missouri (5-6, 1-6) Friday at home.

"Nobody's going to feel sorry for us," Arkansas Coach Bret Bielema said. "You can go back and look at the film and make corrections, but what's done is done.

"Now we'll move ourselves into preparation mode for Missouri in a short week. We have to do a good job of getting our guys back mentally."

Bielema said he's confident the Razorbacks won't have a problem putting the Mississippi State game behind them quickly to focus on Missouri.

"It hurts, it stings, it bites," Bielema said. "I told our players to put this one on me.

"Just keep preparing the way you have and hopefully we can end this on a positive note for our seniors. They're hurting and we'll take 24 hours to get this one through them."

The Razorbacks had won four consecutive games since an open date before losing to Mississippi State.

"We really wanted to win out, but we've got to come back better prepared," Richardson said. "It's our seniors' last game here, and we're going to leave it all out on the field for them."

Allen said playing the Missouri game a day earlier than normal may be a plus.

"I think this team is going to be just fine," Allen said. "I think it's probably even better that it's a short week.

"We'll get our focus even more locked in because we know it's coming quicker."

Print Headline: Score 50 and lose? Hogs cope with it